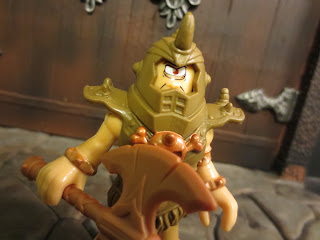 The fourth series of Imaginext Collectible Figures just came out in the spring and now we've already got series 5! That's crazy and it feels like these figures came out of nowhere as we didn't hear anything about them; they just started showing up!. Imaginext must really be doing well for Mattel, particularly these blind-bagged individually packaged figures. These are some incredibly fun and durable toys and I'm always excited to see the line expand. Today I'm beginning my look at series 5 with the Cyclops, the one-eyed monster of Greek mythology and legend! Interestingly, it seems that the blind bagged Lego Minifigures, Playmobil Mysterys Figures, and Imaginext Collectible Figures share many similar characters. While I haven't seen a Playmobil Cyclops yet, Lego did feature one in their 9th series of minifigures. While Lego pretty much started this whole trend, Playmobil and Imaginext have added their own unique take and are running with it! Ready for a closer look at the Cyclops? Then join me after the break... 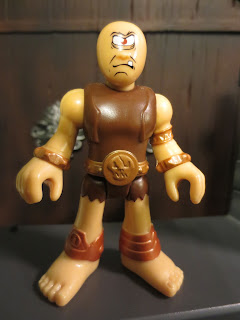 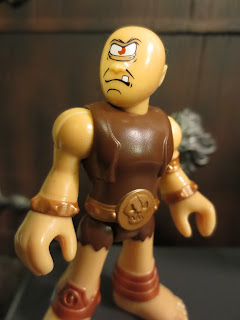 *You'll get tired of me saying this as I review eight of these figures in a row, but I just love the build and style of Imaginext figures. The enlarged hands and feet help them to stand better and give them a unique, cohesive look while the articulation strikes the right balance between keeping these fun to play with and durable for the younger set. And believe me, these little guys are meant to be played with! 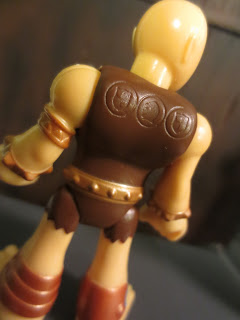 *One of the coolest things about the Imaginext figures that separates them from the Lego or Playmobil figures is that they typically all feature unique sculpts. The Cyclops' outfit is pretty basic (just a brown tunic and vest) but he's adorned himself with a variety of bracers, armbands, and unique greaves.  His armor is asymmetrical as if he's collected it a little at a time over the years!His belt is also wicked and features a large skull to intimidate his opponents. Interestingly, on the back of his vest there are some symbols etched into the plastic: Two shields and what looks like a griffin's head. Anyone know what that's about? 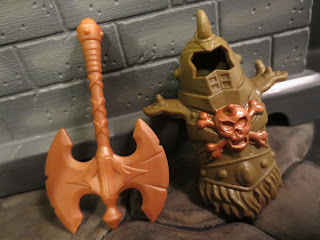 *For a figure under 3 inches, the paintwork is neat and clean. The various pieces of armor on his arms and legs are painted with various shades of copper and bronze paint that even have a bit of a weathered look to them. The work on his face is excellent as he has a great expression with his eye squinting and a snaggletooth popping up above his upper lip.

*Cyclops comes with two accessories: An double bladed battle ax and an armor piece that fits over his head and chest. The ax is really cool, extremely detailed, and fits snugly into the Cyclops' left or right hand. The body armor is also excellent and features lots of great sculpting. Check out the bottom of the armor: Doesn't that look like some furry briefs from Masters of the Universe? yet another MOTU aspect in Imaginext!

*I don't really have any. This is an excellent figure! 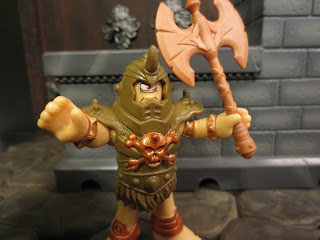 This guy is awesome. I already think that this series could be the strongest series yet and the Cyclops reinforces that belief for me. Look at this guy! He's incredible! He looks awesome with or without his armor, his paintwork is excellent, there's plenty of sculpted detail, and he's tons of fun! How could you not like him? So far as Imaginext figures go, this guy gets an Epic. He's definitely one of the best Imaginext figures that Fisher-Price has released and is worth buying for any fan of Imaginext or cyclopes in general. Heck, even if you're an X-Men fan you ought to pick this guy up, just because. Epic, indeed sir. Let's hope we get a Medusa at some point in this line. Playmobil has one coming up and Lego has already released one so Imaginext needs to follow suit.