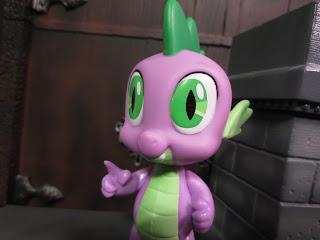 Today I'm checking out one more new figure from Funko's My Little Pony Vinyl Collectibles line: Spike! Spike is a baby dragon who also happens to be Twilight Sparkle's number one assistant. He fulfills the sidekick role nicely and I'm a big fan of the character as he's not only quite funny but also reminds me of Imp from She-Ra: Princess of Power for some reason. Alongside the Mane 6, Spike is definitely the seventh main character in the series and an important part of the show. I was quite interested to see how Funko would handle him and I'm glad they finally got around to releasing him as his own figure (I thought he'd be a pack in with another figure at some point). Spike has a fondness for donuts, 7-hour bubble baths, and Rarity, and now you can reenact his adventures on your toy shelf! Ready for a look at this little guy? Then join me after the break... 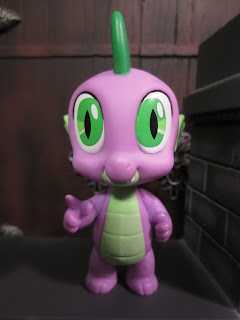 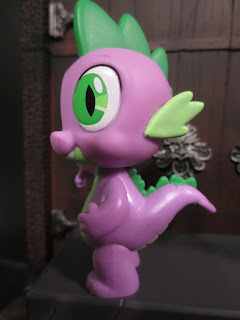 *Spike looks great! He's bright and colorful, just like in the show. The paintwork on his eyes and on his spikes is pretty neat and clean overall with little mess (there's one spike that's a bit messy, though). It can be tough to render animated characters in a three dimensional medium but I think Funko did a nice job here. Spike looks great and I think his proportions are spot on. While Spike has some fantastic expressions in the show, Funko opted for a more basic expression that works well for any display. Spike is smiling and his small fangs are visible coming out of his mouth. How can you not like this guy? 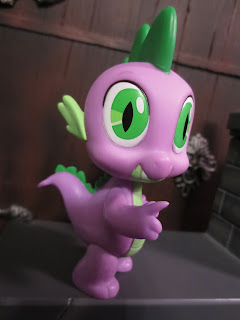 *Spike features something unique for this line: A swivel head! While all of the other figures so far have been solid, unarticulated vinyl figures, Spike is built a bit more like one of Funko's POP! figures. His body is solid but his head feels more like it's rotocast and hollow. It swivels easily, allowing Spike to add some expression to your shelf. He also has a bit of a pose going on as he has a finger pointing up in the air. Is he gesturing at someone? Coming up with an idea to help out Twilight? Asking for another doughnut? The choice is yours! 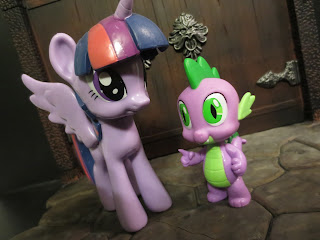 *It took me a bit to decide on this but overall I think Spike's scale is pretty good. Initially I thought he looked too large but after looking at more and more stills from the series, I think he's just about right. I'm really glad that Funko released him in the correct size rather than undersize him or oversize him.

*The only negative have is that the way Spike's head is assembled leaves a bit of a visible ring where the softer head fits over the swivel joint at the base of the head/neck. POP! figures have this too and if you're looking at them from below it's a bit unsightly. 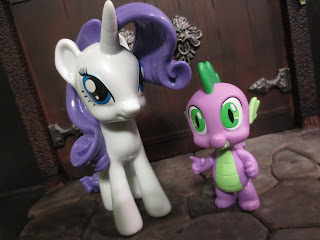 Spike always cracks me up. He's a funny character who adds a nice presence to My Little Pony: Friendship is Magic. Last year at a convention my wife and daughter (who was only about 10 months old at the time) went with a group of friends as the MLP cast. My wife was Rarity and my daughter was Spike. It's fun to have the whole MLP crew together now and I think Spike turned out wonderfully. He's a neat little vinyl figure and easily a Great addition to the line. He currently seems to be a pre-exclusive to Hot Topic so you can pick him up there or wait until he's available in other outlets.

I've reviewed a few other My Little Pony Vinyl Collectibles from Funko, including: