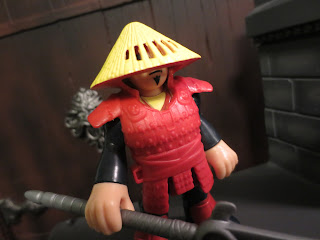 One of the fun things about the Imaginext series (and other "non-licensed" lines like Lego minifigures and Playmobil Mystery figures) is trying to figure out what actor, characters, or historical figure the generic figure represented is based on. As soon as I saw the first image of the Chinese Warrior, my first thought was that this was one of the Three Storms from one of the greatest movies ever made, Big Trouble in Little China. Need another miniature warrior for your Imaginext shelf? This guy could make a great adversary for Batman, an ally for the Power Rangers, or just chill out with the Bigfoot. This is Imaginext, not communism: I'm not going to tell you how to enjoy your toys! I'll tell you how to enjoy this review, though: With a nice cold Six Demon Bag, a toast to good ol' America, and a nice feeling of invincibility! Read on after the break... 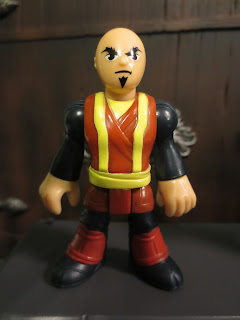 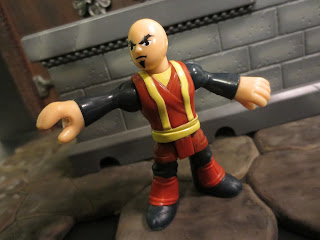 * My saying this will get repetitive as I review eight of these figures in a row, but I just love the build and style of Imaginext. The enlarged hands and feet help them to stand better and give them a unique, cohesive look while the articulation strikes the right balance between keeping these fun to play with and durable for the younger set. And believe me, these little guys are meant to be played with! 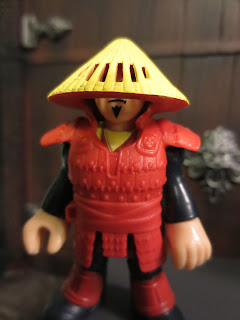 * The base figure is rather plain but when you put the armor piece on this figure it radically improves! The Chinese Warrior's armor is nicely sculpted and fits over his head really well. There's a lot of detail, particularly on the armor's layers and on the hat. I love how the hat has slits for the Chinese Warrior to peek through! It's a cool feature that looks great! By the way, this figure also has three little emblems on his back, kind of like the Cyclops. What does it mean? 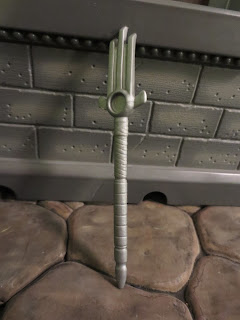 * The Chinese Warrior comes with a zhua, and ancient Chinese melee weapon that is basically a large claw on a six foot stick. This version's a bit more stylized but no less wicked looking. This tool was useful for pulling riders off their horses, pulling shields away from enemies, and flat our causing some brutal, lethal damage. It's molded in a nice silver plastic and can be wielded in one or both hands. I love it! 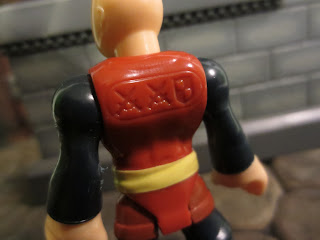 *I don't like the yellow they chose for the hat and accents on this figure. I really wish Fisher-Price had gone with a more straw-like tan color. It looks too bright and clashes with the red. It also seems a bit messy to my eyes. I wish the armor piece itself had a few more paint applications (maybe some black) thrown in. 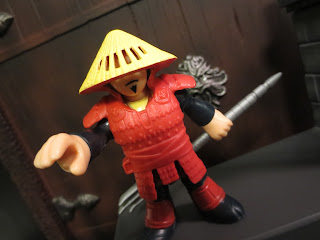 The Chinese Warrior is a cool figure that is fun and net homage to one of my favorite movies. I'm not thrilled with the color choice (the armor is a bit plain) but I can't deny that this is still a solid Imaginext figure. Overall I think I'd give this guy a Good and a 1/2. He's not as cool as the Cyclops but he's certainly more interesting than many figures from previous series, particularly some of the city and athletic based figures. The zhua is a terrific accessory and can be fairly versatile when displayed. Since we've already got Lightning, Rain, and Thunder, what should we call this guy? I'm suggesting Hail. Any better thoughts?

I've reviewed figures from a few of the previous series, including:
Imaginext: Collectible Figures Series 2 by Fisher-Price
"Bigfoot"
Frankenstein's Monster