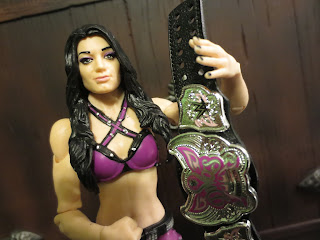 Today I'm looking at the most recent Divas figure from Mattel's WWE Elite series: Paige. Known as both the Anti-Diva and the Diva of Tomorrow, Paige is without a doubt my favorite wrestler in the WWE Divas division. Lots of other folks must agree with me as Paige has been incredibly hard to track down. Seriously, she's the only figure from series #34 that I've never seen in stores. There have been multiple times when I've walked into the action figure aisle and found everyone from series #34 except Paige. Since series #35 and #36 have already been showing up here and there I went ahead and snagged her online for a bit more than retail. That's not something I'd usually do but, let's be honest: Mattel really seems to under pack the Divas and since she comes with two belts Paige's price will probably just continue to skyrocket. Last week on Raw Paige got robbed by a cheap maneuver from the Bella twins. Well guess what Bella's? Guess whose action figure is getting a review on Action Figure Barbecue? That's right: Paige! Join me after the break... 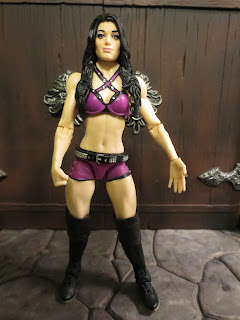 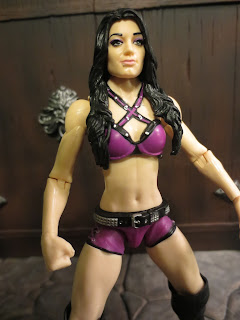 * The sculpt on the body is pretty decent as Mattel has fairly accurately captured this particular outfit well. The various studs on the top and the belt are all accounted for and the combination of boots, leggings, and knee pads are well done. The knee pads are soft pieces of plastic that cover the knees. Her arms look a little too large, though, but she fits in well alongside the rest of the fighters in this line. 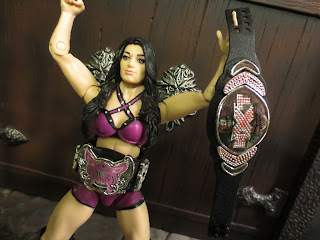 *I really like that Paige comes with both the NXT Women's Championship belt and the WWE Divas Championship belt. She's a champion and deserved the recognition. These belts are made from a rubbery plastic with harder vac metalized plastic emblems. Both of them are rather easy to fit around her waist and look nice on display. 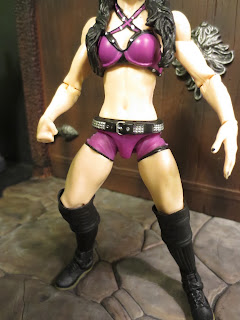 *While I'm going to complain a little bit about articulation here in a minute, I still have to give props for Paige being a sturdy action figure. There aren't many 6-7 inch scaled figures these days that I think could hold up well to playtime by actual kids (not adult collectors who like to make their toys wrestle and fight) but WWE Elite is one of those few lines that do feel like solid toys. I do like Paige's ball jointed upper torso far better than any of the hinged torsos from the male wrestler's, however. Ball jointed torsos just look and function so much better than than traditional "ab crunches." 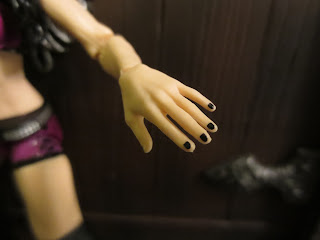 *Fortunately, Mattel kept Paige's skin tone appropriately pale for this figure. They also captured her black fingernails and her eye liner/ mascara well, which are nice touches as well. 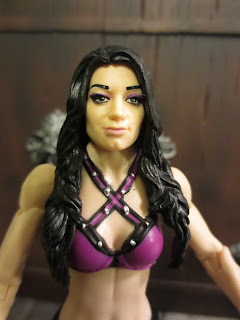 *Where to start? Well, I guess I'm not sure that I think this is a great Paige likeness. Mattel tried as there are some distinctive elements of Paige's face here such as the dimple on her chin and the stud below her right lip, but I think the problem here is that they tried so hard to add so many details that due to the scale of the figure it makes the face look unrecognizable. This just doesn't look like Paige to me. 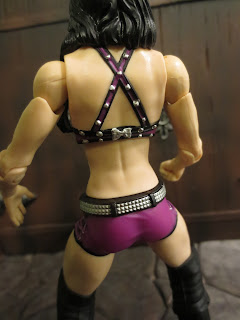 *I have two problems with the paint work on Paige. First, the straps on her top are a mess. There's lots of slop on the straps and the studs are all over the place in terms of quality. Secondly, Mattel with a very flat purple for Paige's outfit when it should be much shinier. A metallic purple paint would have looked so much better and been far more accurate. 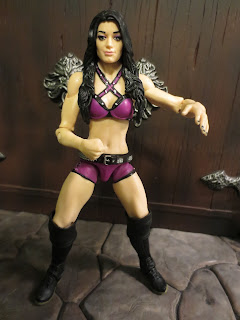 *This is my first female figure from WWE Elite and I have to say that I'm disappointed in the articulation. Paige's hips, knees, and head have such a limited range of motion and the fact that she doesn't have swivel/hinge wrists? Disappointing! Hasbro's doing it on almost all of their Marvel Legends females, so don't tell me it can't be done. 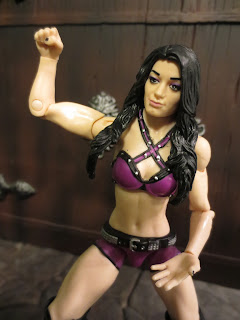 As a Paige fan, I'm a bit disappointed with this figure. I really feel like the headsculpt is pretty off, the paintwork sloppy (and off color), and the articulation underwhelming. This is not a terrible action figure but definitely a disappointing one. Considering that this line seems to release so few Divas, who knows when (or if) we'll get a second Paige figure? As it is I totally understand fans and collectors snapping her up as quickly as possible but the figure is far from ideal. I was really torn on how to rate this figure but ultimately I'm opting for an Eh and a 1/2. Yeah, I just don't think Paige turned out that well. Sadly, if you're not a Paige fan this figure isn't going to win you over. Many of the other WWE Elite figures are just really fun and cool toys on their own, even if you're not interested in wrestling or don't know who the characters are, but Paige just doesn't have that kind of appeal. And I think I know why: Those cheating Bella Twins have been playing dirty! They must have broken into the factory where Mattel is producing these figures and sabotaged them. That sounds like something they would do! You're better than them, Paige! This is just another injustice that you need to avenge and I'll keep cheering for you!