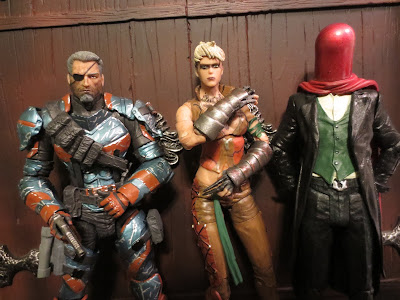 Batman: Arkham Knight is about to be released soon but I decided to go back and pick up an Arkham Origins release that I missed out on last year: The Joker as Red Hood, Copperhead, & Deathstroke (Unmasked) 3-Pack from DC Collectibles. This set was released in 2014 but I, along with a number of other collectors it seems, skipped out on it early on. I can't speak for others but my reasoning was that two of the three figures in the set were basically character variants. The Red Hood version of the Joker is a repaint of 2013's Arkham Origins Joker with a new hooded head sculpt while the unmasked Deathstroke is exactly the same as the Arkham Origins Deathstroke figure with a new headsculpt. While Copperhead is an all new character I still waited until this set reached a price I was comfortable paying. If you shop around a bit you'll find this set around $30 which is a pretty decent value. DC Collectibles has been really bad about repacking figures with little to no changes alongside new, desirable figures in their multipacks, so it seems that playing the waiting game is always a good bet if you can help it. Ready for a look at these three figures? Then join me after the break... 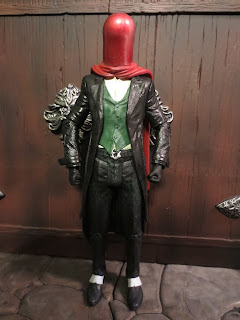 The Facts:
The Joker as Red Hood
Height: 7 1/8ths inches 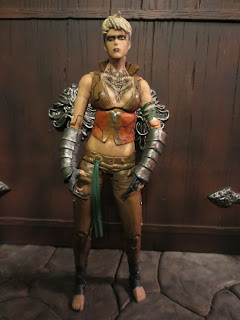 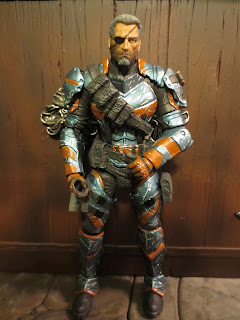 
Non-Scalper Price for the set: $55 (but you can find it a lot cheaper if you shop around). 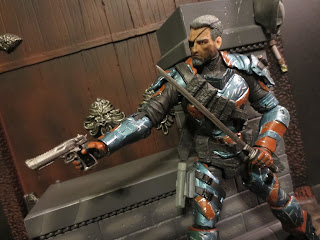 NOTE: Since the Joker and Deathstroke are essentially just head swaps of figures that I have already reviewed, I'm only going to be talking about the new elements of these two figures. If you're interested you can check back on my previous reviews of Deathstroke and the Joker to get my full thoughts on them. 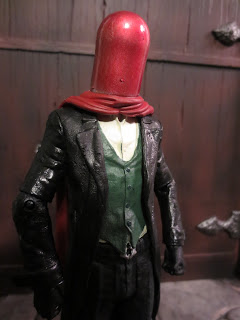 * The Joker's Red Hood helmet, along with his repainted black suit, looks really, really good. As far as I can remember, DC Direct only ever released one Red Hood version of Joker in the past, but that's been awhile (back in the Secret Files: Unmasked series). It's nice to have another version available. The new Red Hood captures the grimy, gritty Arkham series aesthetic perfectly as the helmet looks like it's seen better days thanks to the paintjob. 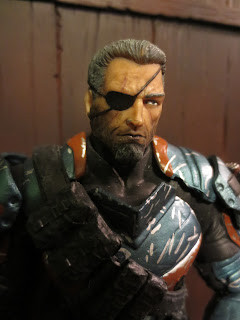 *Deathstroke's unmasked headsculpt is also really good. He looks a bit younger here than he looks in the game but the likeness is unmistakably Slade Wilson. The box gives a general sculpting credit to Gentle Giant Studios and their work here is solid, as usual. 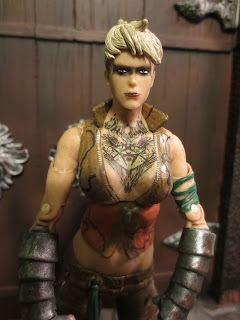 *Let's talk about the main reason everyone bought this set: Copperhead! Copperhead is one of the eight assassins hired by Black Mask to kill Batman. While past versions of Copperhead have been males wearing really bizarre Serpentor-like costumes, Arkham Origins offers a much more lethal, agile, female character who is a deadly assassin and a contortionist. This figure is really incredible looking and is packed with detail! The head sculpt is really impressive! She looks like she means business! Her costume is perfectly captured here! It's always cool to get a new Batman villain and while Mattel released a male Copperhead in the past, this one is a completely different character, so I'd consider her new. 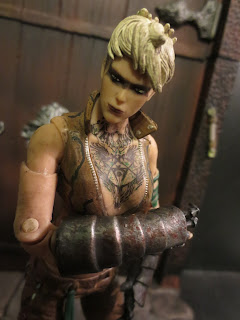 *The paint work is quite impressive as well. Copperhead looked like she was a bit dirty and so both her outfit and her body are covered with a thin layer of grime. The paintwork is really neat and clean, particularly the snake-like pattern on her outfit and the ornate tattoo on her chest. Her metal gauntlets also have a great dry-brushing effect that gives them a weathered look. DC Collectbiles really gave their best effort here and it shows. 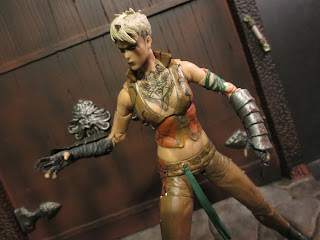 *Oh...and let's talk about Copperhead's articulation. It's insane! Not only does she have a wide range of workable joints with terrific ranges of motion (double hinges elbows and knees, ball jointed hips, etc.) but she has something that I'm not sure if I've seen before on a figure in this scale: An articulated spine. OK, maybe an articulated spine is overselling things a bit but Copperhead definitely seems to have two joints of some kind in her abdomen as well as a ball jointed chest. So, how does this work? Well, her mid-torso down to her waist is actually a rubbery shell that covers up the jointed interior. It looks pretty good and perfectly captures Copperhead's contortionist abilities! Incredible! 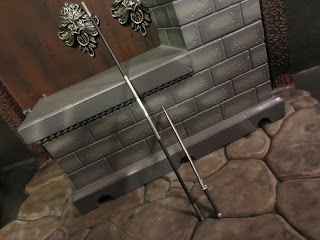 *The original Arkham Origins Deathstroke figure had extremely brittle accessories (my Deathroke's sword broke simply removing it from the sheathe) and this version has the same problem. Be careful! 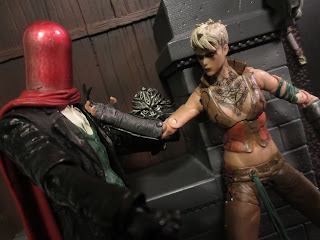 *Speaking of accessories, there sure aren't many figures for a three pack, particularly one that has so much reuse. I've always been a bit surprised that DC Collectibles hasn't created Riddler trophies and other in-game items to give to figures to help add some more value. How cool would this set have been if it had come with a Riddler trophy or the claw-like weapon that Batman takes from Deathstroke near the beginning of the game? 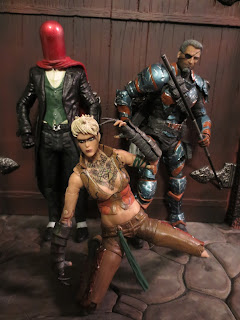 I really question the logic of DC Collectibles including re-dos of the Joker and Deathstroke in this set when, at the time of its release (and even now), they were still available. They're good figures but they felt forced. DC Collectibles has really struggled in this area as there have been multiple times when they've released boxed sets of figures with repaints (or straight re-releases) of figures that most collectors already had. Fortunately there is something different about Joker and Deathstroke so it's not a complete waste. Copperhead, however, is an incredible figure. She really is worth picking up just because of how cool she is! Last year it seemed like we might never get the eight assassins featured in Arkham Origins. While early on we got Bane, Deadshot, Deathstroke, Firefly, and Killer Croc, only Copperhead was revealed and released in 2014. What about Electrocutioner and Shiva? Fortunately at Toy Fair 2015, DC Collectibles revealed pretty much the most awesome three-pack in existence: Lady Shiva, Electrocutioner, and DR. HARLEEN QUINZEL! Oh my gosh! This is without a doubt the coolest set of three action figures to be released this year, I imagine! DC Collectibles has really gotten behind the Arkham games and I'm glad they keep supporting them. This is a Great set overall and definitely worth picking up. If you don't have the first version of the Joker or Deathstroke it's even better, though. 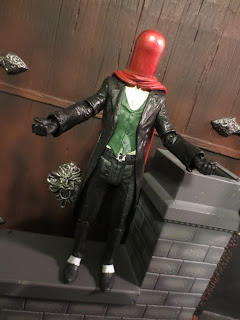 I've reviewed a number of figures from the various Batman: Arkham games, including:

Batman: Power Attack  by Mattel
"Attack in the Box" The Joker


The Laughing Man Joker from Kenner's Legends of Batman

Laughing Gas Joker from Kenner's Legends of the Dark Knight

The New 52: Super Villains by DC Collectibles
Deathstroke
The Joker