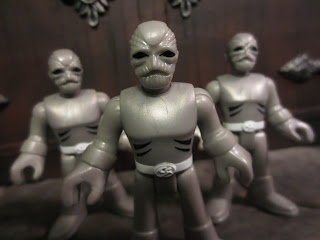 I don't have the nostalgia for Mighty Morphin Power Rangers that many of you seem to have. Back in my ThEpic Review days, one of our most popular articles ever was my review of the Power Rangers Legacy Morpher from Bandai. It was definitely a cool toy but it and the Legacy Megazord were about as far as I wanted to go into picking up Power Rangers stuff. Well, that was until Fisher-Price's Imaginext brand picked up the license for Mighty Morphin Power Rangers. While I don't think I'll be picking up everything they offer I love Imaginext and am very intrigued that they went after this brand. In all honesty, I think it's much more interesting than most of the non-Legacy items that Bandai has offered in the past 20 years or so. It's also interesting that they chose to do the original incarnations of the rangers versus something newer and more recognizable to kids. Either A.: Fisher-Price realizes that parents by their kids toys and the MMPR generation are starting to procreate or B: They know that their are plenty of adult collectors who dig Imaginext. I'm not sure which answer is correct but I dig the effort and had to pick up the Putty Patrol Pack as soon as I saw. It's a set of three of the ridiculously silly clay creatures that Finster cranked out for Rita Repulsa. These guys are next to worthless in a fight but they're fun and they just appealed to me. Prepared for a peak at the Putty Patrol Pack? Say that three times fast and join me after the break... 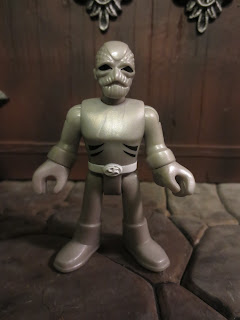 Accessories: None, just the three Putties. 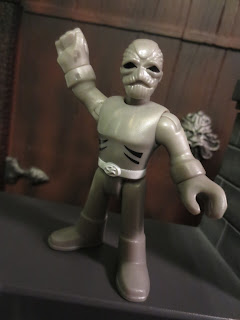 *The Putties are built just like any other Imaginext figure which means they're a bit stylized (larger feet and hands) and are incredibly durable. Having some martial arts based Imaginext figures definitely makes me wish for some improved leg movement but I totally get that one of the key selling points of Imaginext is that they're designed to be easy for younger kids to play with and thus they're feet are always even to keep them standing upright. 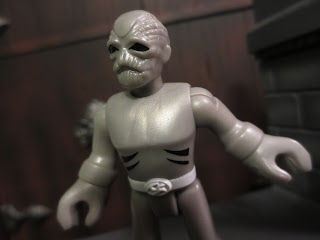 *These guys.. well, they're Putties. Yeah, the Putties were absolutely ridiculous. They definitely looked like some sort of gender neutral Japanese sex dolls come to life. The 1970's Doctor Who production company sent these creature designs back for being too silly. Of course, these look exactly how they should. They're basic Putties (some had rocks and stuff on their hands) but the face is pretty perfect and they nailed the somewhat metallic sheen of their spandex outfits. 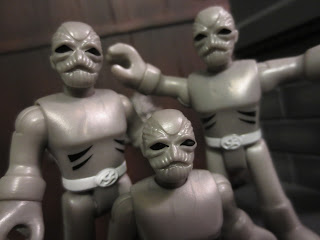 *I love getting three of these fellows in one package as one Putty is just not enough. These guys need friends, as these are the kind of guys that Foot Soldiers pick on for being stupid, Cobra Troopers laugh at for working for too many idiots, and Stormtroopers make fun of for not being very good shots. These gentlemen follow the words of the one and only Billy Shears in that they get by with a little help from their friends.

*I don't really have any. This is a nice, solid set of figures. 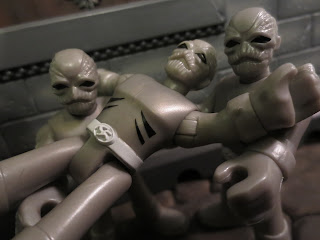 The Putty Patrol Pack is a real steal if you find it at retail. Even though they don't have any accessories, getting three Imaginext figures (and army builders to boot) is a nice value. I'll probably pick up the Power Ranger two-packs if I see them again but the Putties were the only ones I needed to have. They're so darn weird and I love that. These guys seem like they'd be the ultimate screw-ups hanging around the Imaginext universe. They also kind of look like the grey aliens from Robot Chicken, which is funny in and of itself. They're not the greatest Imaginext figures or anything but the fact that they're packaged together was brilliant. Kudos to Fisher-Price for "getting it" when it comes to army builders. Easily a Great purchase here if you stumble upon them in the wild.

I've reviewed a few other Mighty Morphin Power Rangers items on here, including: