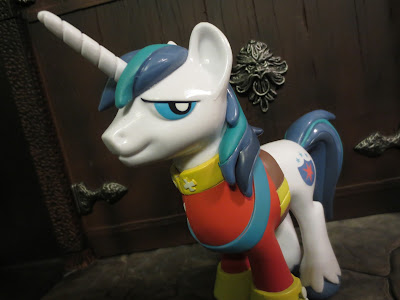 Right now, some of you are saying "Heck yeah, My Little Pony: Friendship is Magic!" You're probably popping my air bro-hoofs through your computer screen and everything. The rest of you, however, are probably thinking: "This is supposed to be a serious toy blog with review of dark and gritty collectibles like the Spawn of Cthulhu, killer clowns, hot redheads, and mobsters named Buttons McBoomBoom." Well, too bad. I started watching My Little Pony: Friendship is Magic a few years ago to see what all the fuss was about and my wife and I were impressed by how much we loved the show. While the animation is slick and modern, the humor and storytelling remind me a great deal of the cartoons of my youth more than many modern cartoons that seem to rely on randomness and noise. When we found out we were having a daughter, we decided MLP was a great theme for a nursery. Now my little one loves the characters (Rainbow Dash is a big hit around our house right now) and I've gotten more into it as well. I love these Funko vinyls as they're bold, colorful, and fun. Shining Armor is Twilight Sparkle's older brother, Princess Cadance's husband, and the captain of the Canterlot Royal Guard. He's also a Hot Topic "pre-exclusive" which means at some point he'll be available everywhere. Ready for a closer look at Shining Armor? Then join me after the break... 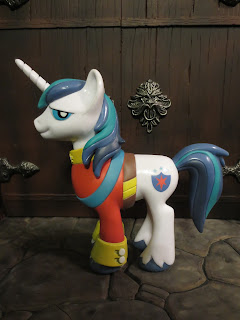 Non-scalper Price: $18-$20 dollars (I picked this one up along with Princess Cadance at a Hot Topic sale during a buy one get one 1/2 off sale.) 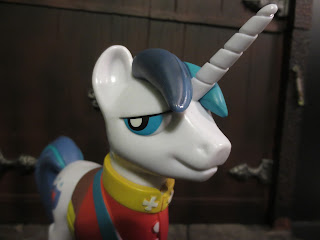 *I really like the facial expression that Funko opted to give Shining Armor. He looks very cool and a bit sly, definitely fitting for Twilight Sparkle's B.B.B.F.F. His eyes are very neatly painted and the work on his mane and horn is pretty impressive. As this line has continued Funko has continued to put out more and more unique sculpts and Shining Armor definitely benefits from that decision. 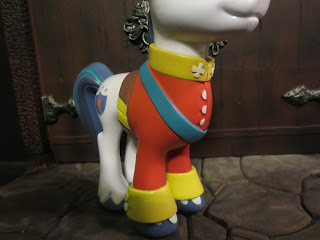 *Shining Armor is dressed in his captain of the guard outfit which makes him look incredibly regal and dapper. The sculpting is nice as is the paintwork. Some of the vinyl MLP figures have often had some uneven paintwork but Shining Armor's is excellent. He's a bit taller than the other ponies as well, standing about 5 1/2 inches. 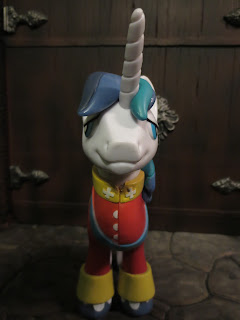 *The only real problem I have with this figure is that he doesn't display well when viewed head on. Most of the other ponies look fine but Shining Armor's eyes don't look right in this position. That's a problem because displaying these figures can eat up a lot of space if they're all sideways. Mine are all displayed head on and I'm going to have to figure out what to do with Shining Armor here. It can be tough translating animated characters from a 2D drawing to a 3D figure and I think this aspect of Shining Armor is definitely a miss. 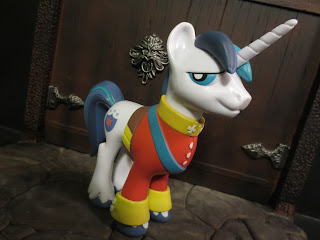 While he's not one of my favorite characters, Shining Armor is a nice addition to this collection. I probably would not have picked he and Cadance up if they hadn't been on sale, but I'm glad that I bit the bullet and did. The sculpt and paintwork on this figure are pretty impressive. I do hope that Funko manages to check and make sure that future figures all look good from the side and head on. I guess I'll have Shining Armor at a 3/4 turn. This guy gets a Good and a 1/2 in my book. If you need more unicorns in military outfits for your collection, pick him up!


I've reviewed a few of my My Little Pony Vinyl Collectibles on here, including: