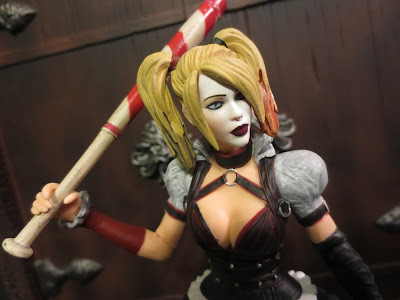 It's not too much longer until the release of Batman: Arkham Knight.  I'm really looking forward to the game and I know most of you are, too! I'm also looking forward to getting plenty of new action figures as well. In the past I've felt like DC Collectibles (formerly DC Direct) has tended to abandon their various action figure subsets far too quickly so I'm thankful they've kept hammering away at the Arkham video games to give us plenty of characters. They've done an excellent job so far and I'm hoping they'll just keep digging deeper. I love the character selection and style found in the figures from the games. Personally, I think there various interpretations of Harley Quinn have been fantastic and have really helped to elevate the character even more. I'm a fan of the unique looks that she sports in each game and Arkham Knight looks to have another winner with Harley's new outfit. DC Collectibles also looks to have another hit toyline on their hands. Ready for a closer look? Then join me after the break... 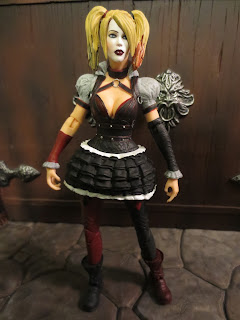 *While there's no doubt that these new Arkham Knight figures look better and are a smidge taller than many of the previous releases from the earlier games in the series, Harley is still going to fit in really well with your other figures. DC Collectibles continues to capture the particular style of the games which includes extremely detailed costumes that manage to be over-the-top while still having a gritty, rolled in the gutter look to them. 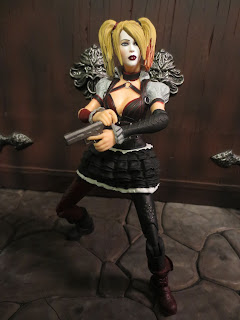 *DC Collectibles has not only improved their quality control over the past few years but they've also really upped the ante on the amount of articulation in many of their action figures. Harley is fantastic and features as much (or more) articulation than any Marvel Legends or WWE Elite figure. The double hinged knees, excellent hips (hidden nicely by her skirt), swivel/hinge ankles, and ball jointed head really allow her to take some expressive poses. She stands great on her own, too. 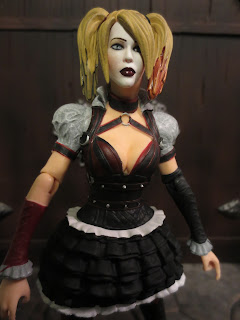 *The Arkham costume designs are always a visual treat and Harley is no exception; she's quite a looker! It'd odd that so many of us in our 20's and 30's have a fear of clowns due to things like It and Poltergeist and yet we'd never run and hide from Harley Quinn! Harley's wearing an outfit that takes elements from her Arkham Asylum and Arkham City looks while blending together a bit of her classic costume, too. There's so much detail here and Harley looks beautiful. Her expression is a bit subdued but she's easily one of the most gorgeous female action figures in this scale that we've seen so far this year. Her skirt is made from a softer, pliable material and has some excellent sculpting work on the ruffles. It really looks like it's made from actual material! 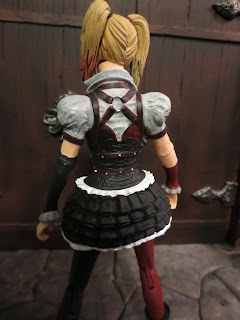 *Overall I'm pretty happy with the paint work. There's a lot of crisp detail but also some of the old McFarlane "mix the paint to give things a grungier look" tactic. Harley's face and hair are perfect, though, as her eyes and lips actually have a wet look to them. The paint work really accents this figure well. 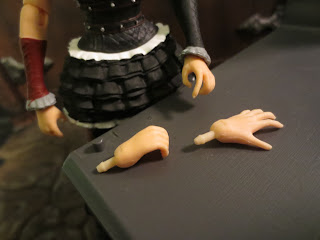 *I love that Harley has swappable hands. What an unexpected feature? They easily swap in and out and help to add to her expressiveness (the open palmed left hand) or allow her to hold her weapons. 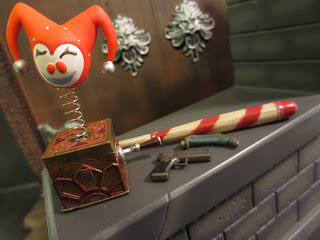 *Harley comes with some four other excellent accessories: A pistol, a candy-striped baseball bat, a jack-in-the box, and some kind of handheld device that will probably be used in the game. It looks like maybe an injector of some kind or perhaps even a handheld detonator. Anyways, these accessories are all really strong, particularly the awesome jack-in-the box. I love that it uses a real spring! This is an amazing complement of accessories and it makes this figure go from Great to Amazing! 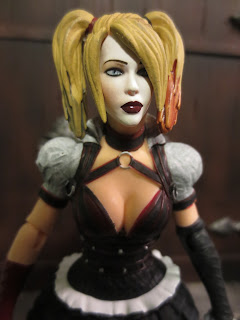 *Umm...None, really. I'm pretty happy with every aspect of the toy. 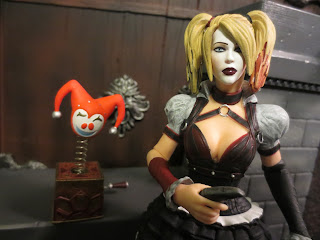 This is really a good Harley Quinn figure. One of the best I own, in fact. Everything just comes together perfectly here: Sculpt, paint, articulation, and accessories. Boy do I love all of the extra little stuff she comes with. While Harley was probably the figure in this set that least needed the extra stuff to make her a desirable purchase, DC Collectibles really went the extra mile with her. I'm giving this Harley Quinn an Epic rating as I'm not sure how she could be any better. It's awesome to see that the Arkham Knight figures have been great so far and that it seems like DC Collectibles has plenty more planned! Let's hope they're all as good as Ms. Quinn here! 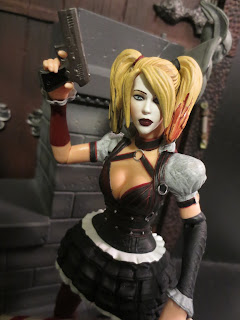 So far I've only reviewed Red Hood from Arkham Knight, but I've reviewed plenty of other Arkham figures: