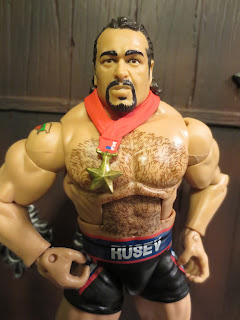 So, what did y'all think of Elimination Chamber? The Rollins/ Ambrose and Cena/ Owens matches were insanely awesome but the Intercontinental match was a  little disappointing. I was cheering for Dolph Ziggler but, had Rusev been in the fight, I probably would have been cheering for the Bulgarian Brute. Sadly, Rusev fractured his foot during a match with Ryback last week and thus was not cleared to compete which caused the Dolph Ziggler/ Lana/ Rusev storyline to go on hold a bit. What did the Russian Tank have to say about not being able to compete via Twitter?

That's why I love this guy! Alexander Rusev is just a great, entertaining heel and I can't help but cheer for him! Miroslav Barnyashev is the WWE's first Bulgarian wrestler and he does an excellent job with the character of Rusev by making all of his fights memorable. I was waiting for Rusev to be released in Matel's WWE Elite series and we finally have him in series 34 in his ring attire from Payback 2014. Ready to get crushed by this Bulgarian Brute? Then join me after the break... 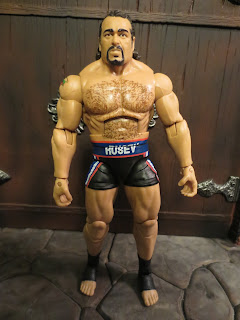 Accessories: Hero of the Russian Federation medal and ringside steps. 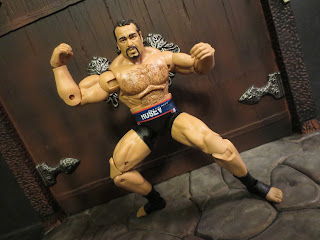 *One of the things I like best about Mattel's WWE Elite series is that they are just good, solid action figures. They're sturdy, durable, and well articulated. These guys are so incredibly fun to pose and play with and Rusev is no exception. The only thing I wish Rusev had was a hinged neck (like Star Wars Black figures) and double jointed elbows. Everything else is excellent, though, and I love putting Rusev into different combat stances so much that I'm also tempted to snag a John Cena figure for Rusev to crush. Almost. 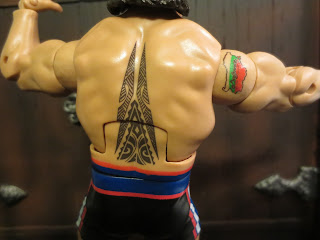 *There's not a ton of paint work on Rusev but I like what's there. The paint on his shorts, head, and ankle wraps are neat and clean and the tattoos are excellent! He's got an extremely detailed tattoo on his back and a tattoo of Bulgaria on his right shoulder. I'm also pretty impressed by his chest hair. He has more chest hair than I typically notice on Rusev but it does add to the figure's appearance and is well applied. 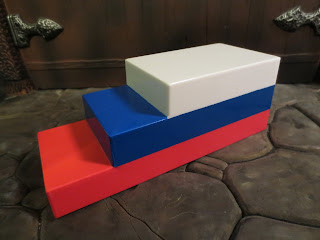 *Rusev comes with two accessories, one of which is a set of steps in the white, blue, and red of the Russian Federation. They look great and are a neat accessory for posing Rusev on or having him use them as a weapon of some sort to bash in someone's head. 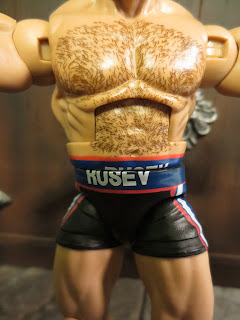 *I really, really do not like that Rusev's name on the waistband of his shorts is divided by his swivel waist. As soon as you turn Rusev just a little bit the "Rusev" wording becomes nearly illegible. I really wish Mattel would have just lowered the wording a bit so that it stayed on the lower part of his trunks only. Honestly, I'd like to see Mattel build the waists of the WWE Elite figures more like the MOTUC figures where the trunks are a separate piece attached over the waist assembly. It'd probably improve articulation and aesthetics. 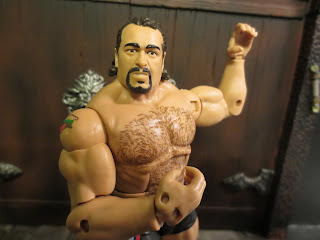 *I'm not sure that Rusev's build is quite right. Check out Rusev: Part of his look is that he's really bulky. This figure doesn't look bad by any means but the body just doesn't match the real Rusev's physique. 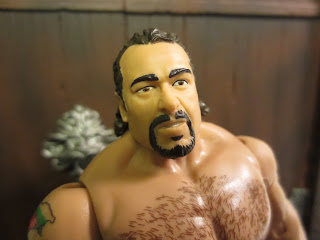 *The headsculpt isn't a bad likeness but I'm not sure what expression Mattel was going for with Rusev. It's not a neutral expression but it's also not a full on angry expression. It kind of looks like Rusev is confused. Maybe he's listening to Bo Dallas. 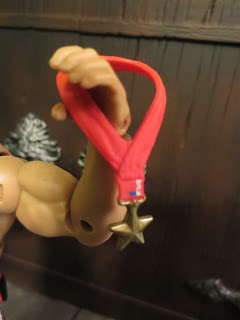 *Rusev comes with his Hero of the Russian Federation medal that was handmade by Vladmir Putin just for him. It's actually a great accessory as it sits flat over his neck, is made of a sturdy rubber, and has a decent sculpt. Why's it in the negatives then? Well, my Rusev is missing most of the paint on the white, blue, and red stripes that are supposed to be painted on above the star. It's kind of a bummer as this is a cool accessory. 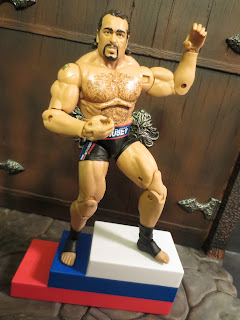 I can't deny that this is a good, fun toy but Rusev has lots of little things that just add up to make me less enthusiastic about this figure. I could probably overlook the less than perfect headsculpt and the slightly off physique, but the awkward way his name painted across his waist swivel really irritates me. It's just so awful. I'm also aggravated by his medal not having all of the proper paint apps (this is a QC issue that seems to be unique to my Rusev, so yours may vary). Overall, I'm a bit conflicted. Rusev is fun but flawed in a number of ways, particularly for WWE Elite. I think I'm giving Rusev a Good which is my default, average score. He really could have been better just with some better decisions made. Let's hope that Rusev makes it into WWE Elite again in the future as he's a fun character that could be redone. Maybe his Wrestlemania XXXI gear? Now I just need a Lana to go with him (or with a new Dolph Ziggler).

I've only reviewed a few WWE Elite figures so far, including: