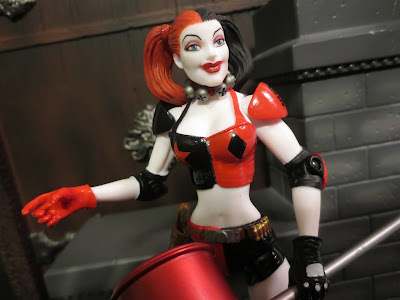 This weekend I'm going to be at Heroes Con in Charlotte. I go mainly to buy toys and enjoy the cosplay (I'll be Star-Lord, FYI). For the past few years there are two characters I see represented the most in cosplay: Deadpool and Harley Quinn. There are always so many Harley Quinns running around! She's one of those characters that's easily adaptable to any situation and easily recognizable in a variety of outfits. Today I'm looking at a new figure of Ms. Quinzel from DC Collectibles' The New 52: Super-villains subset that features her in her roller derby outfit from her current self-titled book. I've only read the first TPB (the second is on the way) but I'm a big fan of this book. Harley Quinn is one of the most perfect superhero characters out there as she's so versatile. She can be a hero or she can be a villain. She can be intelligent and brilliant or as crazy as possible. She can be hot as all get our or...well, Harley Quinn is always hot. She can pull of absolutely any look as well. This is Harley as she dresses for the roller derby in her book by Amanda Conner, Jimmy Palmiotti, and Chad Hardin. Ready for a closer look at everyone's favorite clown? (Sorry Mr. J, but you're second place now!) Then join me after the break... 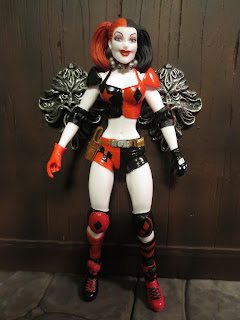 The Facts:
Height:6 1/2 inches (without rollerskates) 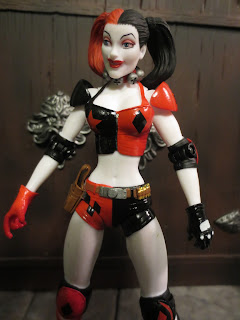 * The overall style of this figure absolutely resembles the tone of Harley Quinn's book! It's bright, vivid, and definitely a bit cheeky! I love the sculpt of everything but the face, which I'll talk about below. Harley's body looks great, though, as does her outfit. There's some excellent detail here from her head to her toes. Her roller skates have eyelets for the laces and the little pom-poms on the top while her pigtails hang naturally thanks to being molded in a softer rubbery plastic. She has a necklace of jingle bells around her neck as well as a belt carrying her working holster and some extra rounds of ammunition. Dave Cortes is given sculpting credit on the package, which is great because he deserves it. 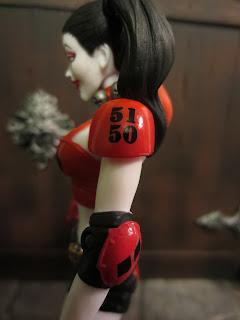 *One other cool thing is that Harley's knee, elbow, and shoulder pads are separate pieces that are attached to their respective joints. The pads can actually rotate separately and move along with the joints. They have some excellent sculpting and paintwork on them, including a neat little Easter egg on the left shoulder. See that "5150" stamped on the pads? Thanks to the good folks over at OAFE who got this figure before I did), I learned that is actually a California welfare code that authorizes law enforcement or a clinician to initiate an involuntary psychiatric hold. Now you know! 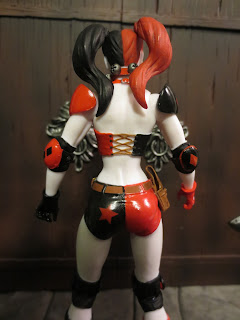 *The paint work is really sharp, particularly due to the contrast between Harley's white skin and her red and black outfit. There is very little slop here and plenty of small details. The paint on her uniform has a really shiny appearance to it that makes it look like it's made from a pleather-like material. Traditionally Harley has been portrayed as using make-up to paint her face white but starting in the New 52 her skin has been permanently bleached white thanks to the Joker, which is what is represented by this figure. 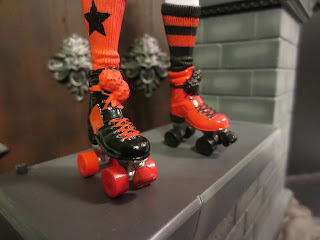 *One of the nicest surprises about this figure is that Harley Quinn's roller skates are removable. Yup, they actually come packaged separately in the package and plug in easily for real roller derby action! The wheels even roll! What a neat extra! 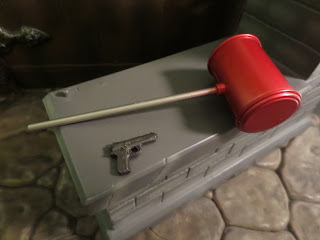 *Of course, Harley also comes with two weapons: A pistol and a large mallet. The pistol and mallet are both nice accessories that fit easily in Harley's hands. The pistol can even fit snugly in the holster on her right hip. It's not a perfect fit but it works. What would Harley be without some items with which to cause mischief, right? 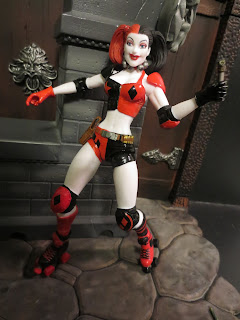 * Harley Quinn is an odd figure in that she has some decent articulation in a few places but she's not as well articulated as so many of DC Collectibles' recent efforts. It's odd receiving this Harley Quinn in the same order as the brilliant Arkham Knight Harley as that figure is so much more advanced. The lack of hinged ankles, mid-torso articulation, and hip joints with a wider range of motion is noticed, particularly for a figure dressed for the roller derby. I want her to be able to take more action oriented poses, darn it! 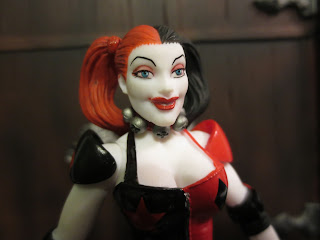 *I'm not really feeling the headsculpt. I like the expression and the headsculpt is painted well (paticularly the eyes), but there is something about the face that looks off. Overall the figure greatly resembles the art from the comics but something about the face just doesn't ring true to me. It's not a deal breaker or anything, but it's just not as good as I had hoped. 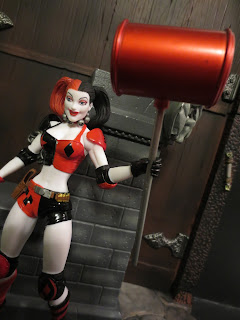 *I haven't had any problems, but the handle of Harley's hammer seems like it could be fragile. Be careful! 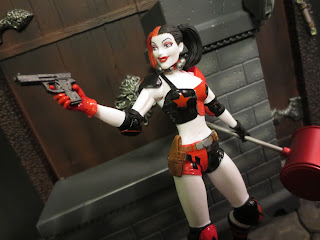 While this figure isn't as nice as DC Collectible's currently available Arkham Knight Harley Quinn figure, it's a very different look for the character which I imagine most Batman and Harley Quinn fans will have to have. Other than the head sculpt being somewhat off (which is something I said about the Suicide Squad Harley Quinn figure, too!) I'm pretty happy with this figure. Great accessories, excellent sculpting and paint, and removable working roller skates. What more could you want? Better leg articulation, that's what! My biggest problem is that I wish this figure could move more freely. DC Collectibles proves that they've upped the ante in terms of articulation over the past year or two so I hate to see them releasing a more limited figure. They pick and choose which figures need more articulation, which makes sense as not every character is an acrobat. Harley is, though, and better hip and ankle articulation would have helped out tremendously. Still, this is a Great figure and a worthy addition to your shelves of Batman villains (everyone else literally has multiple shelves of Batman villains, right? Not just me?).


I've reviewed two other figures from the New 52: Super-Villains subset:
Deathstroke
The Joker