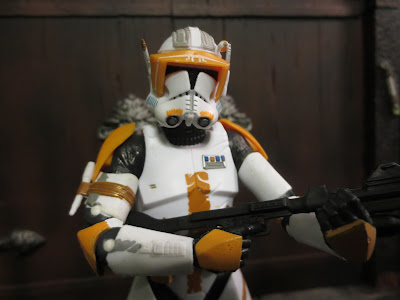 With the introduction of Clone Commander Cody into The Black Series, we now have our fourth named prequel character (the other three being Darth Maul, Obi-Wan Kenobi, and Anakin Skywalker). Yup, other than having a slew of Clone Troopers available, The Black Series has been very heavily focused on the Original Trilogy. Originally appearing in Revenge of the Sith, Commander Cody (AKA CC-2224) is one of the few named clones in the films. He also has a unique outfit and thus he's more than just a repaint of the standard Clone Trooper body; Cody has a number of new parts that help to differentiate him from his fellow Clones. Cody is a great looking and well constructed figure but he has some problems, too. In fact, he's a great example of both the high points and low points of Star Wars: The Black Series. Ready for a closer look? Then join me after the break... 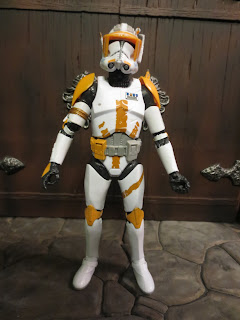 Non-Scalper Price: $20 (although I found him on Amazon for around $17) 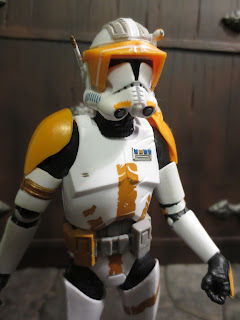 *Commander Cody differs from the standard troops by his new unique pieces: A torso, right bicep, shoulder pads, and head. Cody's armor is a bit more complex than the standard Clone Trooper in that he has some scuffs and scrapes on his chest plate, a number of small antennae, and a more complicated helmet and thus Hasbro ensured to sculpt these new parts to intermingle with the previously tooled Clone Trooper parts. Cody looks great and visually stands out on the shelf due to the cool bits and bobs on his armor. Hasbro just does a much better job on the armored figures than they do on the standard human characters. 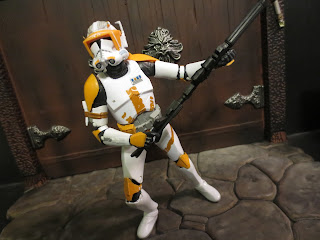 *Overall Commander Cody feels sturdy and has plenty of useful articulation. These are the perfect figures to sit around and fiddle around with while you're watching television or taking a conference call. They're durable and solidly built. None of Cody's various antennae feel the least bit fragile, FYI. 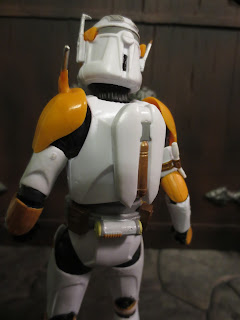 *Commander Cody has a fairly complex paint job that might be the nicest yet seen in the line (it's definitely in the top 5). Hasbro really stepped up and made sure that Cody's armor was appropriately detailed as there are some excellent fine details captured on the figure. I personally love the way that Cody's belt has painted details. I also like the neat work on some of the smaller details such as the pad on his left breast, the weathering on the yellow and grey stripes on his armor, and the blue lines across his helmet. For a mass market figure everything here is neat and clean. 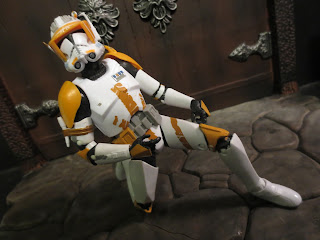 *They don't feel breakable by any means but I am a bit disappointed that Commander Cody's elbows and knees feel rubbery. This was a problem that the original Clone Trooper had but I felt that the Clone Sergeant and Clone Captain had fixed that problem. Not sure what happened here but gummy elbows are not my cup of tea. 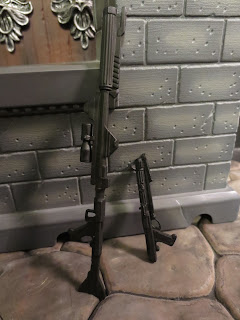 *Cody comes with the same two weapons that previous Clones have included (a DC-15A blaster and a DC-15S blaster) but that doesn't quite cut it here. First of all, Cody's weapons lack the additional paint applications that the Sergeant and Captain included. This is disappointing as it seems like a bit of a downgrade. Secondly, why not give Cody some of the extras he uses in the film, such as his hologram projector? That's one of those accessories that I always think of as being significant to Cody and it would have been a welcome addition.

*Cody needs a removable helmet or a swappable head. We actually see Cody with his helmet off in Revenge of the Sith as he often interacts with Obi-Wan face to face. This would have been a nice extra to add some more value to the figure. 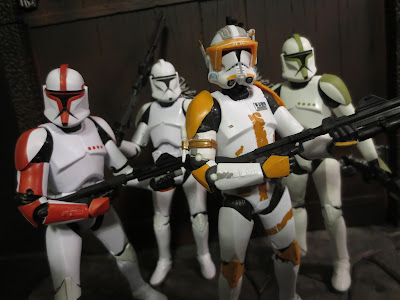 Clone Commander Cody is not a bad figure at all. The only technical flaw I can highlight is the rubbery knee and elbow joints and that's not a deal breaker. Otherwise, this is an incredibly nicely sculpted and painted action figure. The real disappointment to me, though, is the lack of accessories, particularly the handheld holographic projector and a removable helmet. It's stuff like this that bothers me when it's missing because we can probably safely assume that Hasbro's not going to visit Commander Cody and make changes in the future nor would we want them too. Hasbro makes nice figures but it feels like they put little thought into really offering the best product they can. The first series or two of Star Wars Black offered so many cool little extras but the later releases have felt like they were content to just get by. In the end I can't call Commander Cody a bad figure at all but he could have been an easy contender for one of the best of the year with some better accessorizing. As it stands I'm giving him a Great as he's still an awesome figure. He's just not as amazing as I know Hasbro is capable of making him.

I've reviewed a number of other Star Wars: The Black Series figures, including: