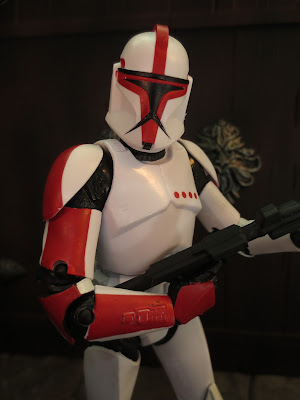 Today I'm looking at the Clone Trooper Captain, one of the newest Star Wars: The Black Series figures out there. With this series (which also includes Luke Skywalker in Stormtrooper disguise and Emperor Sheev Palpatne) and the series that includes Commander Cody, IG-88, and Leia in the Boushh disguise hitting at almost the same time, we don't currently have any new Star Wars Black figures to look forward to. Well, any that Hasbro has officially announced; it turns out that one of the First Order Stromtroopers from Star Wars: The Force Awakens has been popping up for sale on E-bay from time to time. Pretty sweet, eh? Anyways, back to the Clone Captain! So, it turns out that the Clone Captain was actually the first Clone Trooper Hasbro released in the main Episode II line back in 2002 (there was a sneak preview Clone Trooper released earlier in Power of the Jedi, though) and was the only Clone Trooper widely available for awhile. Kind of odd, really. Anyways, this guy is just a simple repaint of the earlier Black Series Clone Trooper and the Clone Trooper Sergeant so I'm not going to go too in depth on the things I've already talked about with those figures and will mostly be sticking to the differences and changes from his previous brothers. Ready for a look at the Clone Trooper Captain? Then join me after the break... 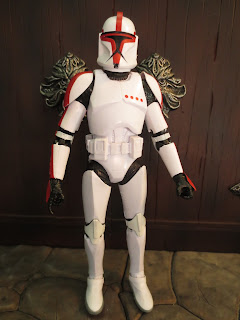 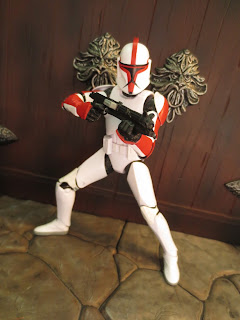 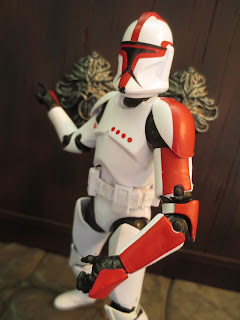 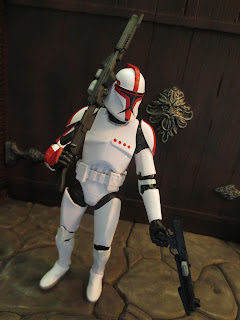 *Also like the two clone troopers before him, the Captain comes with a DC-15A blaster (the longer rifle) and a DC-15S blaster (the shorter carbine). These rifles are sturdier than some of the other weapons in the line and have the same paint apps as the Clone Trooper Sergeant's weapons. The 15S has a paint app on the side mounted power magazine while the 15A has a paint app on the sniper scope. It's amazing how such a little detail radically improves the look of this figure and I'm glad we're seeing these extras continue. 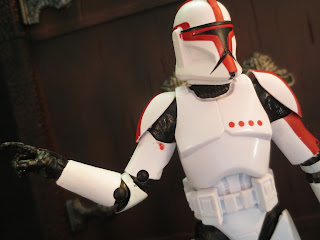 *There's a bit of messy paintwork on the Clone Trooper Captain. First of all he has an errant spot of red paint on his right bicep armor. Secondly, the red paint on his right forearm doesn't seem to have fully covered the communicator attached to his armor. It looks a bit rough, actually. His knee pads are also a bit gunky. 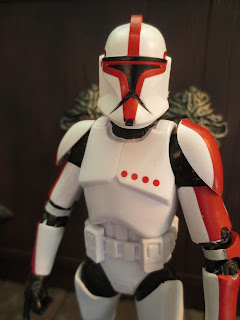 *The Captain has the the same problem with his shoulder armor as the previous Clone Troopers as the way it sets tends to restrict the shoulder articulation, particularly for lateral movement. It's not a huge issue but one I felt was worth mentioning. 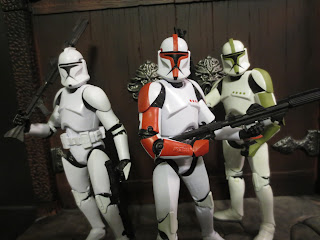 While this is the third figure I have of this same mold I still really do like it. I wish the paintwork was a little cleaner in places but overall the Clone Trooper Captain is still a pretty fantastic figure. His bright white armor is also rather nice looking. At this point I do wish Hasbro would swap up the accessories a bit or add something new in here. An extra rifle or pistol would go a long ways towards giving each new Clone Trooper release something new besides just different colored paint. Overall, though, I still think the armored characters are what Hasbro does best in this line and the Clone Trooper Captain is another hit. I'm giving him a Great and a 1/2 as he is another solid entry in this line. Commander Cody is out now, too, so here comes a different (if a bit more unique) clone, but I have a feeling that even though we haven't had any more Clones announced we can still expect more in the future.