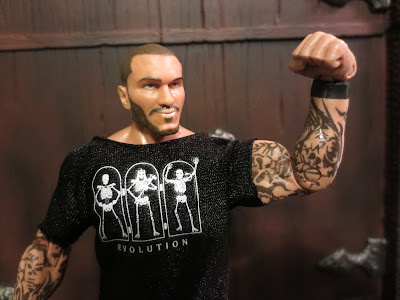 Randy Orton is a man known by many monikers. The Viper. The Apex Predator. The Legend Killer. Mr. Money in the Bank. The Face of the WWE. At this point, however, I think there's three words that most of us associate Randy Orton with...."RKO Outta Nowhere!" Yup, that's the stuff. Seriously, the RKO is freaking amazing and it's always incredibly fun to watch Randy pull them off. This figure, released as part of WWE Elite Collection series 35, depicts Orton in his gear from Extreme Rules 2014 when Evolution fought the Shield in a 6 man tag team match . Of course, this Sunday Orton has another huge match as he's one of the seven men fighting in the Money in the Bank match. I'm not sure who to cheer for in that match? I really like both Orton and Ziggler but Roman Reigns' storyline has really picked up and I'd love to see both he and Dean Ambrose come out ahead after this event. Of course, Neville is in the fight as well, and who can cheer against that guy? While I'm deciding who I'll be cheering for on Sunday night, you can read this review about a Randy Orton action figure... 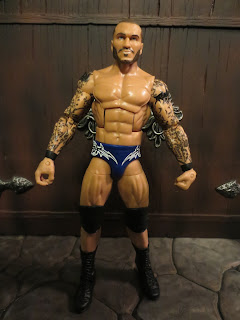 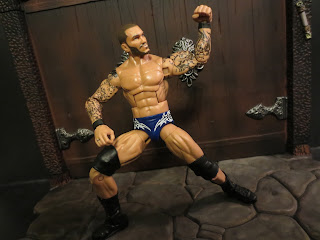 Randy Orton's articulation is excellent. He's definitely one of the best WWE Elite Collection figures yet in terms of the number of joints he has and the range of motion they're capable of. Seriously, you'll have this figure whipping RKOs out of nowhere in no time flat. I'm really impressed by how durable and fun these figures are. They definitely seem like they'd be just as fun for the kids as they are for adult collectors. 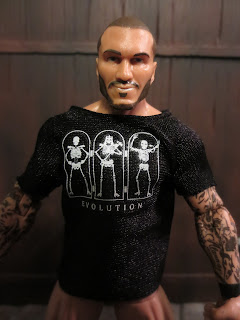 * Randy comes with an Evolution shirt that depicts three skeletons, representing Batista, Triple H, and Orton himself. It's a pretty cool accessory that actually doesn't look too bad on the figure. It's made from a stretchy material that helps it to fit the figure well and it has a Velcro strap in the back so that you don't have to hassle with the figure too much. The screen printing on this looks really impressive. 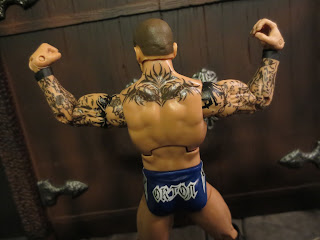 *One of the things that Mattel really does well on the Elite figures is in capturing the tattoos of the WWE Superstars. Orton has a ton and they're all here. Of course he has the awesome tribal tattoo on his back but he's also got all of the details on his sleeves. On his left arm is his daughter's name with her birth date in Roman numerals and on his right bicep you can clearly make out 1 Peter 5:8. The details on Orton's trunks look awesome, too. 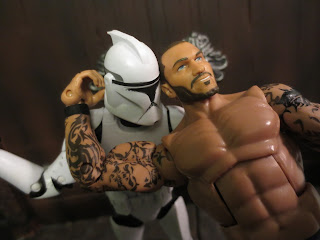 * Another positive thing is 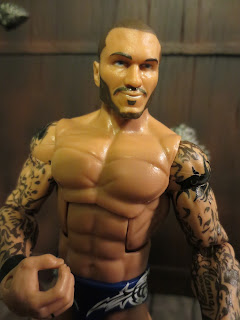 *I like the headsculpt on this figure a good bit except for the fact that there's some white paint on the lips that seem to be implying...a toothy grin maybe? I'm not sure. It looks less like Randy Orton is grinning and more like he's eaten a box of powdered donuts. It's an odd little thing but I find that it distracting.

*I wish Randy Orton came with one extra accessory. A chair, a microphone, anything would be nice. He's a bit lighter than most other figures in the line in terms of accessories. 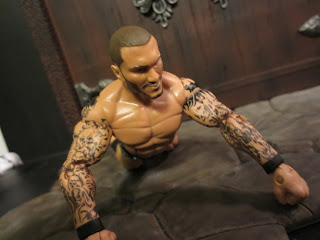 This is a pretty good Randy Orton action figure. It's fun, durable, and has some excellent paint detail on the tattoos. I do wish he came with an accessory other than just the t-shirt but overall he's definitely worth the money, particularly if you can snag him for less than $20 (the WWE Elite figures can sometimes be found for closer to the $17 dollar mark). I'm giving Mr. RKO here a Great rating. If you're a fan, he's well worth picking up. Anyways, since Money in the Bank 2015 is this weekend, here's who I'll be rooting for:

~R-Truth vs. King Barret: R-Truth. Barret might be the King of the Ring, but I'm pulling for Truth.

~Money in the Bank: This one's tough. I think ultimately I'm pulling for Dolph Ziggler, but I wouldn't be disappointed if Roman Reigns, Neville, or Orton makes it.

~Seth Rollins vs. Dean Ambrose: Dean Ambrose all the way! This is a great feud and should be an amazing match! Having Dean as the champion also could set up some great storylines for the future, too.

~The New Day vs. The Prime Time Players: Oddly enough, I think I'm cheering for The New Day. Yeah, they've become heels, but they're good heels and really do pull off some great comedy to match their athleticism. I could see myself rooting against them and for the Prime Time Players, however, if they cheat during the match.

~Ryback vs. Big Show: Ryback all the way! I really like that guy and hope he gets to keep his title for a bit. He was great on Miz TV this week on Raw, too.

~Nikki Bella vs. Paige: Paige. Paige all the way. The Bellas cheat and are just not all that great. Paige needs to clean house with Nikki Bella.

Can't get enough WWE Elite? Check out my other reviews: