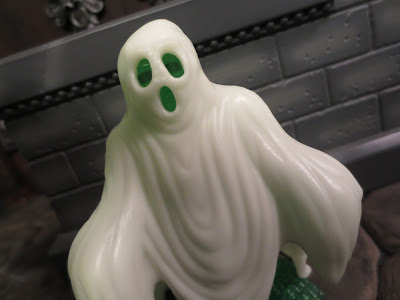 Sometimes a figure gets my highest marks because the figure does everything right: Excellent sculpting, solid, quality articulation, inspired paintwork, and fun, useful accessories. Other times, a figure gets my highest marks because of personal bias. Today's figure is absolutely an example of a figure that gets the highest marks because of personal biases. It has multiple things that I love. Is it a ghost? Heck yeah it's a ghost, broseph! Does that ghost glow in the dark? It does indeed. Is there an Imaginext skeleton underneath the removable sheet? Affirmative, sir! Is that skeleton neon green and translucent? By the sheer hotness of Harley Quinn, you'd better believe! Seriously, this is by far the most amazing Imaginext figure ever made and if you don't own it I'm not sure that I can ever trust you or be your friend. Ready for a look at this spooky specter? Then join me after the break... 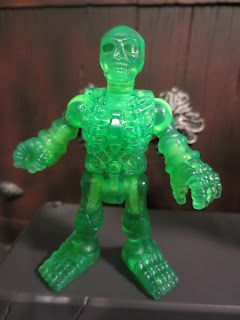 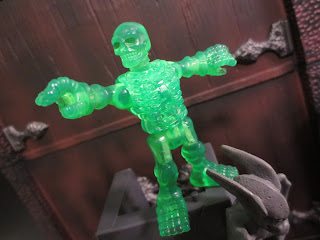 *This is an awesome toy. It glows, it's translucent, and it's durable. The skeleton is built the same as any other standard Imaginext figure which is just fine as he's durable and nicely articulated for being so small. I need an army of these! 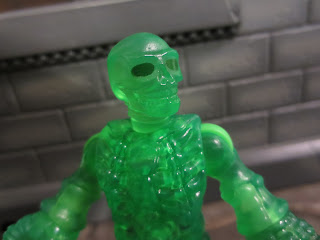 *Holy snap! This guy is an amazing, beautiful translucent green! Seriously, the only thing that could improve this figure is if he tasted like a green freeze pop. I mean, this is a beautiful color of green and it just looks amazing! It's the color of lime jello or the mucus Tick. How can you not love this toy! His eyes are a darker green which looks awesome and makes him more intimidating!

*The sculpt is great! I know Imaginext isn't big on reusing too many sculpts but was this guy part of one of the earlier pirate sets? I don't care! He's amazing! He's got...bones and stuff all over. With a little extra paint Fisher-Price could easily turn this guy into Scareglow from Masters of the Universe if they chose to. They've already made so many MOTU homages in this line already that they just need to dive in! 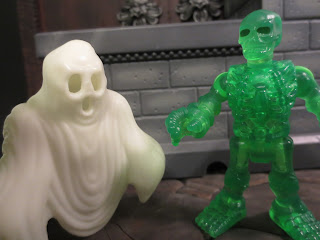 *The sheet is an awesome accessory! It's made from a soft plastic that easily fits over the good old nuclear skeleton hear, turning him into the Ghost! Boo!!! Did I mention that he glows in the dark? He totally does. Not only do his sheets have some nice wrinkles and folds on them but the glow in the dark plastic that they are molded in looks great and has a nice, strong glow to it. This guy looks awesome hanging out with the other monstrous Imaginext figures.

*If you don't own this figure than you're a weenie. That's the negative. 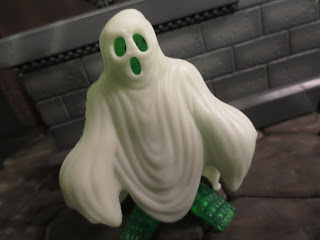 This figure is just so darn fun! I belong in a tree because I'm a nut for Imaginext figures! They're great toys and I have fun displaying them and playing with them with my little one. She's a bit too young to play with them on her own and unsupervised which means that I get to join in on the fun! The Ghost is an excellent addition to the roster of monsters they've been building up in the Collectible Figures Series, including the Mummy, Dracula, Frankenstein's Monster, the Gillman, the Zombie, the Witch, and the Werewolf whom I'll review later this week. The Ghost just fires on oh so many cylinders and I'm loving it! Easily an Epic figure!

I've reviewed two other figures from this series so far: Cyclops and Chinese Warrior.