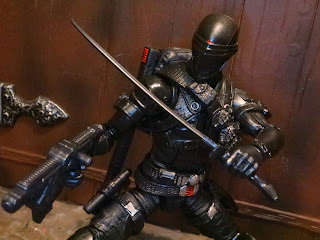 Hasbro has released dozens of Snake Eyes figures over the years. While he had a few variants in the original ARAH line in the early 1990s Hasbro began offering more and more figures of the beloved ninja. Snake Eyes has always been a pillar of the G.I. Joe universe and his backstory is a huge part of the mythology of the series but it's fare to say that Hasbro has went wild with Snake Eyes releases over the years. During the early 2000s rebirth of the line Snake Eyes kept popping up again and again, and he did so during Spy Troops, and Valor Vs Venom, and DTC, and the 25th Anniversary Collection, and Sigma 6, and Rise of Cobra, and Pursuit of Cobra, and G.I. Joe Retaliation. But you know what? Most Snake Eyes figures released have been winners! It's hard not to like a commando/ ninja dressed in dark colors with lots of weapons who often runs around with a wolf. Hasbro kicked off the new 6 inch scaled G.I. Joe Classified Series with a deluxe Snake Eyes, which I didn't pick up. I did grab the standard Snake Eyes from Series 1, though. Let's take a look at the silent star of the G.I. Joe universe after the break... 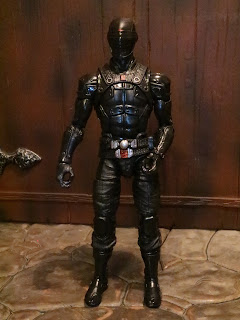 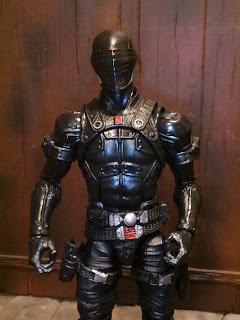 * For the Classified Series Hasbro went with a figure that seems to draw more from the 1985 "ninja" Snake Eyes than from the 1982 "commando" Snake Eyes. He still has visible details of military styled equipment (holsters, pouches, webgear) but the sleek, armored suit (loaded with textures) seems more reminiscent of the Ninja side of Snake Eyes. Despite having so many figures made, Snake Eyes' overall look doesn't change much and so you can draw comparisons between this figure and plenty of others. He makes me think of the Valor Vs Venom Snake Eyes, the Sigma 6 Snake Eyes, and the Rise of Cobra Snake Eyes, but he's molded mostly in black like the original 198 2 figure. Color is sparse, mainly limited to silver details and the red Araashikage symbols on his blet and harness. 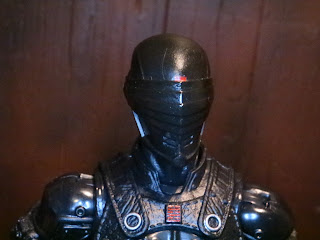 * Snake Eye's is wearing the armored visor and helmet combination. Again, his headsculpt is molded in all black though there is a spot of red right above the visor. Not sure what it's for but it does at least add a little something to the figure, calling your attention to his eye line. 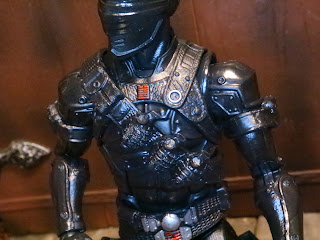 * There's a lot of going on with Snake Eyes' uniform, especially on his torso. There are two removable straps with pouches that fit over his biceps and a removable bandolier with sculpted grenade that fits across his chest. The straps with the Arashikage symbol (on his upper torso) are actually removable, too, though you'd have to remove Snake Eyes' head and really work it over his arms. I wonder if this is a removable piece so that the torso can be reused for other versions of the character in the future. 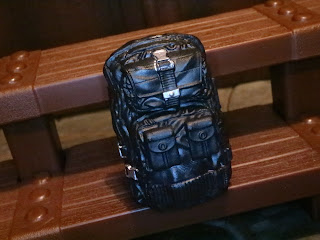 * Snake Eyes must be toting around a lot of gear as he has a fairly large backpack. It's all black with silver buckles and lots of sculpted pouches. There's also a hole on the right side for storing an extra accessory, but I'll get to that in a moment. 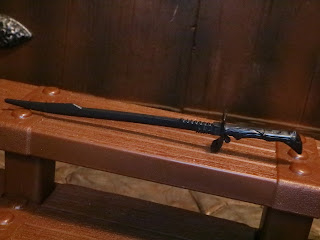 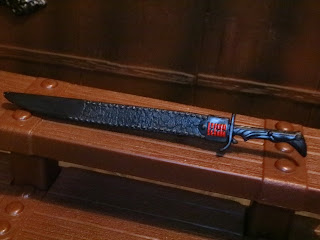 * Snake Eyes's sheathe for his sword is very nice. The sheathe has a rather impressive texture, the blade fits inside perfectly, and it's adorned with the Arashikage symbol. There's a peg on the sheathe so it can attach to the side of Snake Eyes' backpack or plug right into the backpack hole on his back. 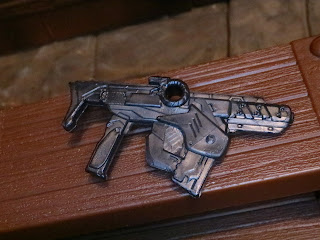 * While the exclusive Snake Eyes has his traditional Uzi, this version has a submachine gun like weapon that seems a bit more futuristic. There's clearly a magazine of some sort in the front, so I'm assuming it fires some sort of ammunition rather than lasers. I like the design overall (and Snake Eyes looks great holding it) but I do wish Hasbro would give us some details about the weapons. A simple file card, or a gear blueprint like the Sigma 6 figures had, would be quite nice. 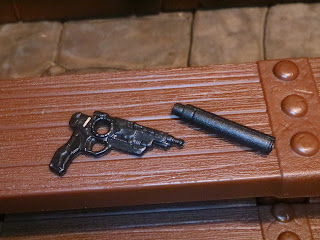 * Snake Eyes also has a pistol with a removable suppressor. The suppressor fits onto the barrel securely and it looks awesome with the figure. 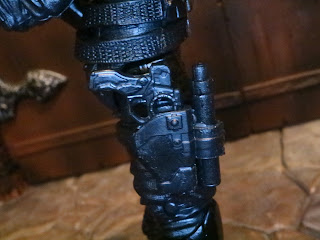 * To help tote around the pistol and suppressor Snake Eyes has a removable holster on his right thigh. Its got a place for both parts, which is just excellent in my book. Hasbro started doing the removable suppressors and functional holsters to hold both parts during the Pursuit of Cobra era and it's nice to see them continue it here. 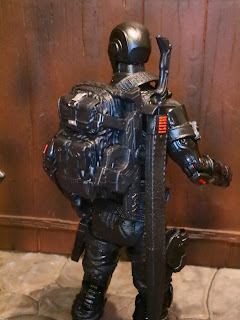 * Since everything is all black it might be kind of hard to see here but I have Snake Eyes' smg plugged into his backpack and his sword plugged into the smg. I'm not crazy about the setup (it doesn't make a lot of sense to have to remove the sword sheathe to the gun) but it does show off some of the inter-connectivity of the accessories. 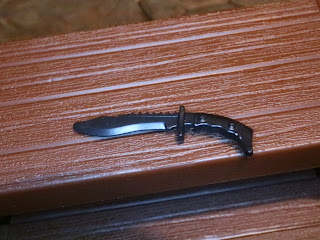 * Lastly, Snake Eyes comes with a knife. It's a solid sculpt and different than the knives that come with Scarlett, so it seems to be unique accessory to him thus far. 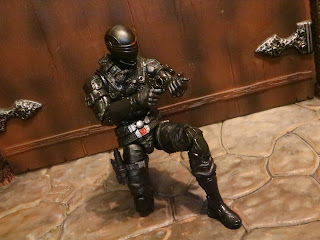 * Like the rest of the figures in the line Sanke Eyes has some really nice articulation. There are plenty of joints and they all move quite well. Hasbro has been on a roll for quite a few year now, making some of the sturdiest and most well designed 6 inch scaled action figures on the market. 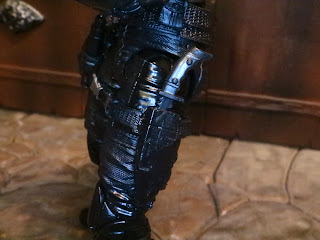 * Snake Eyes' knife doesn't quite fit in his sheathe. I've actually been working on mine a bit and I'm happier with it, but the sheathe was molded incorrectly, allowing for the knife to only go so far in. I believe some versions of the figure have this corrected.


* I mentioned the holes in Snake Eyes' pistol and smg and while they're cool designs the holes just look really, really odd. Not a fan. 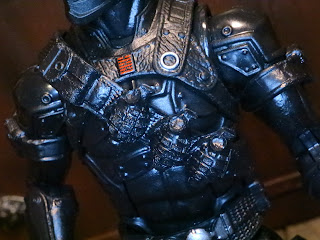 * Snake Eyes wears all black. It's kind of his thing. That being said, a little color would have given this guy some life while still keeping him as a man of the shadows. Like, how about a few paint applications on the grenades? Green or grey, maybe? Perhaps at least a few more silver details or perhaps a different color for his visor? Yeah, black looks really cool, but nothing but black washes out all of the nice details on this guy. 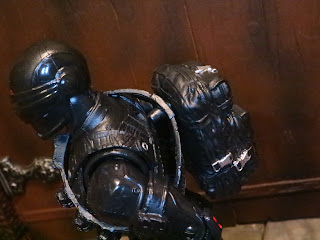 * Snake Eyes' backpack has the tendency to pop out of the hole in his back. It still hangs on via his bandolier, but it seems odd that something as simple as a functional backpack wasn't nailed perfectly. 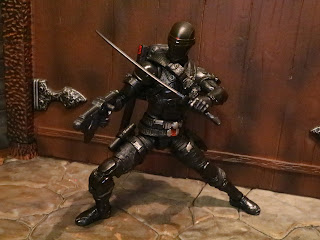 I have a lot of complaints about Snake Eyes, so you might think I don't like him. That wouldn't be true, though. He's really quite cool but he's such an iconic character that I'm always going to have nitpicks about a new version of him. I would bet you dollars to doughnuts that we'll see another version of him within a year, so I'm sure we'll see some of these issues fixed or tweaked in the future. This guy, however, is a solid toy loaded with accessories. He comes packed two per case, which is smart. Everyone's going to want this Great and a 1/2 Snake Eyes in their collection.

For more reviews from the G.I. Joe Classified Series check out the following:
Duke
Roadblock
Scarlett