Action Figure Review: The New Day from Masters of the WWE Universe by Mattel 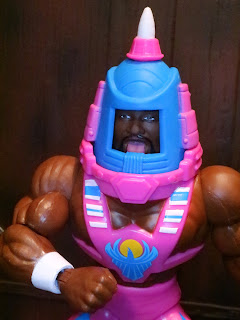 It's time for another review from Mattel's Masters of the WWE Universe mashup line and this time it's perhaps my most anticipated figure in this line to date: The New Day. Yes, the New Day. Not just Big E or Kofi Kingston or Xavier Woods, but the entire New Day in one figure. How is that even possible? How do you merge all three of your eight time and longest reigning WWE tag team champs into one figure? By making them the Man-E-Faces of Positivity of course! Yes, for MOTWWEU Mattel combined The New Day with Man-E-Faces, allowing you to switch the figure between all three members of the team. Not only is it a cool way to do a tag team in MOTU form but it also ties in with the New Days' use of the Freebird Rule, allowing them to rotate out who defends a title at any given match. Pour yourself a big bowl of Booty-O's, clap your hands, and feel the Power of Grayskull! Let's check out this amazing rendition of the trio founded on the Power of Positivity after the break... 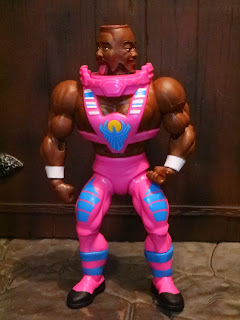 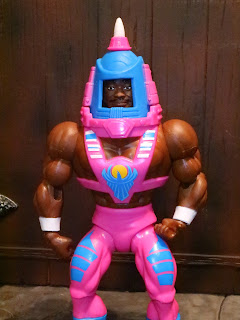 
* The New Day is dressed in a Man-E-Faces styled wrestling uniform that perfectly captures the colors and style of The New Day. Colored pink and blue with The New Day' logo on the chest, there's no way that these guys won't stand out on your shelf. The torso is a unique sculpted piece, which makes The New Day kind of unique in this line. Like a unicorn, you might say. 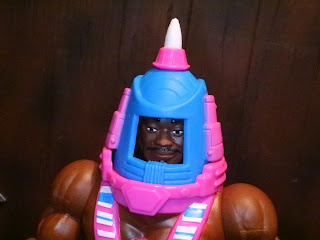 * The biggest feature of The New Day is that they're wearing a helmet inspired by Man-E-Face. Well, except for the fact that rather than a simple knob on top there is a magical unicorn horn on top that allows you to switch team members. First up is Kofi Kingston, billed as "The Heart and Soul of the New Day." Kofi is quite recognizable, even just seeing his face and nothing else. 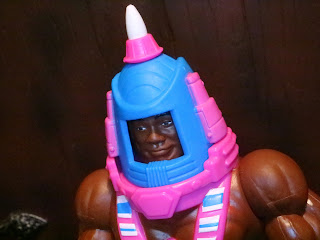 * The helmet uses a cylinder with all three of The New Day's faces on it. While it does pop off like the Masters of the Universe Classics Man-E-Faces, the cylinders are not interchangeable between the figures. The second face is Xavier Woods, billed as the "Superstar with Brains to Spare." Again, it's a good likeness and easily recognizable as Woods. Too bad the figure doesn't come with a trombone accessory in the same color as Man-E-Face's vintage pistol. 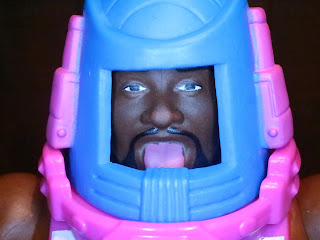 * Last up is Big E, the "Powerhouse of Positivity." Rather than having a neutral face, Big E is sculpted with his tongue sticking out. I love it! It's a very Big E thing to do and definitely helps add some more variety to the figure. 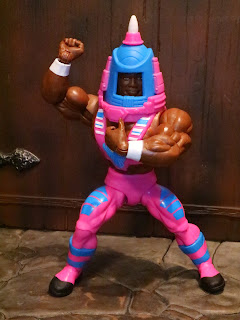 * The New Day has the same articulation scheme as the rest of the figures in this series, which used the articulation designed for the Masters of the Universe Origins line. These are chunky, durable figures with quite a bit of movement. They're awfully fun to play with and they're just flat out good toys. I especially love the fact that The New Day has an action feature. It's just such a darn brilliant melding of a MOTU character and three fantastic WWE Superstars! Pretend Kofi is flying through the air! Pretend Big E is lifting people over his head! Pretend Xavier Woods is giving his teammates clap theory to buff their stats! 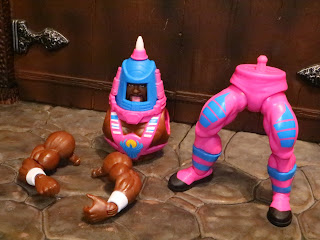 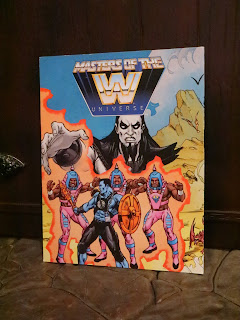 * Behind each standard MOTWWEU release is a minicomic of sorts. It's only 4 pages (cover, bio, comic, and back page with cross sell art) but it looks cool and does offer some cool information on the role of The New Day in WWEternia.The art is pretty slick, too, and you get a short comic of the team battling in the ring. 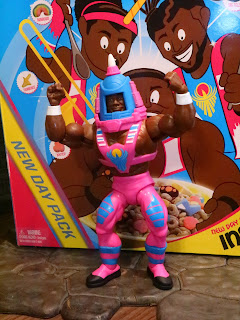 The New Day is an Epic figure and a brilliant way to bring Xavier Woods, Kofi Kingston, and Big E into the Masters of the WWE Universe line. Not only is this a great looking figure but it's one of the best examples of how this line matches the features of a WWE Superstar (or, in this case, a tag team stable) and combines it with the gimmick of a MOTU character. I love this one! The only thing that could have made it better is the presence of an accessory. It's definitely possible that WWE didn't want any of the figures to come with guns (understandable) but I still think a trombone accessory would have been amazing. Or a big pile of pancakes. You can definitely feel the Power of Grayskull with this release for sure!


If you're a fan of Kofi Kingston, I've reviewed the Battle Pack set with Big E & Kofi Kingston and the Wrestlemania 32 based The New Day Pack.

If you want to learn to dance like Big E, check out my reviews of the Mattel WWE Battle Pack with Big E & Kofi Kingston and the Wrestlemania 32 based The New Day Pack.

If you want to learn to play the trombone like Xavier Woods, check out my review of the WWE Elite series 42 Xavier Woods and the Wrestlemania 32 based The New Day Pack.