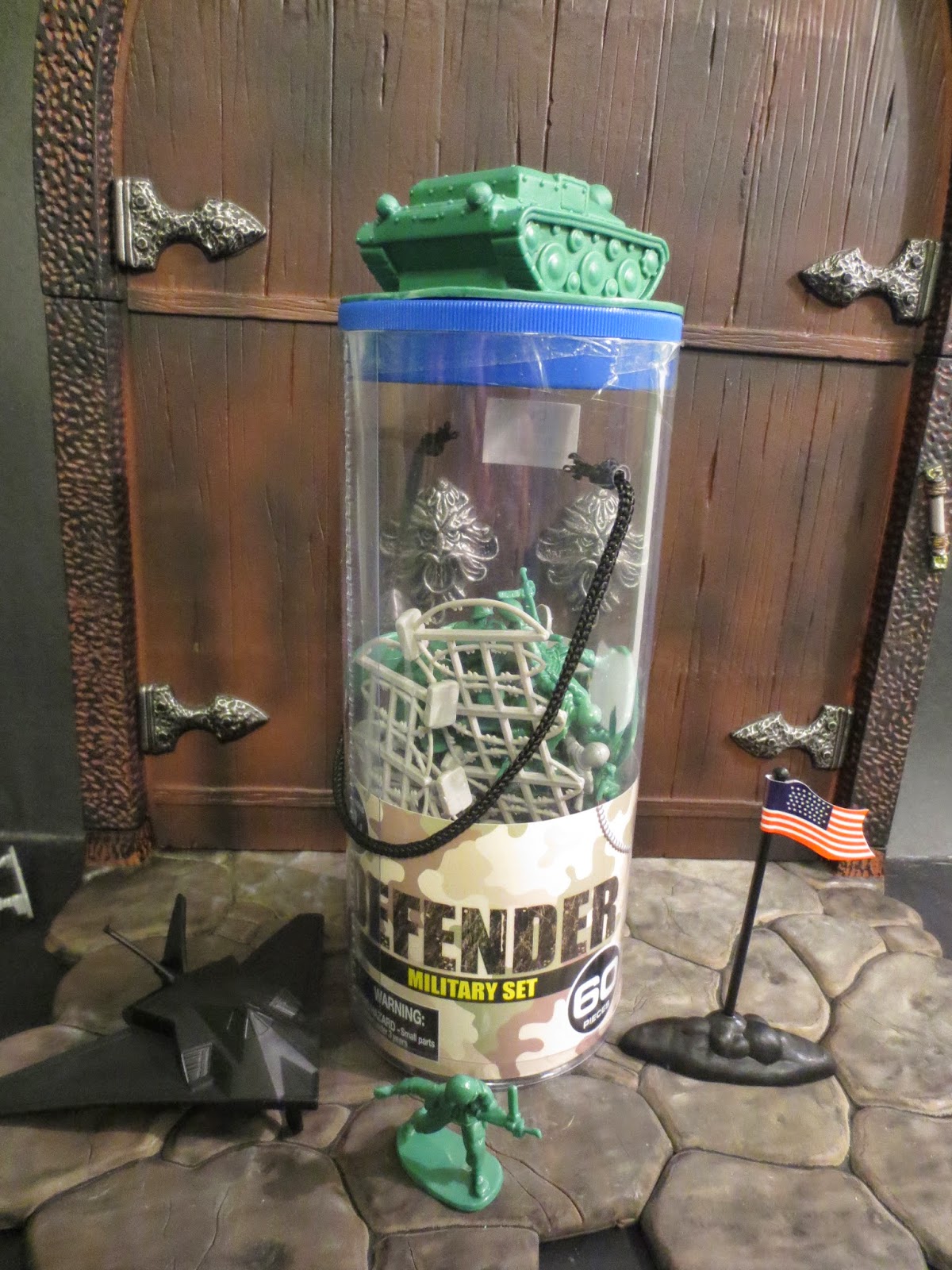 The first piece is a little plastic tank. It's actually the topper for the thing plastic tube these guys come in. Kind of a cool little extra. 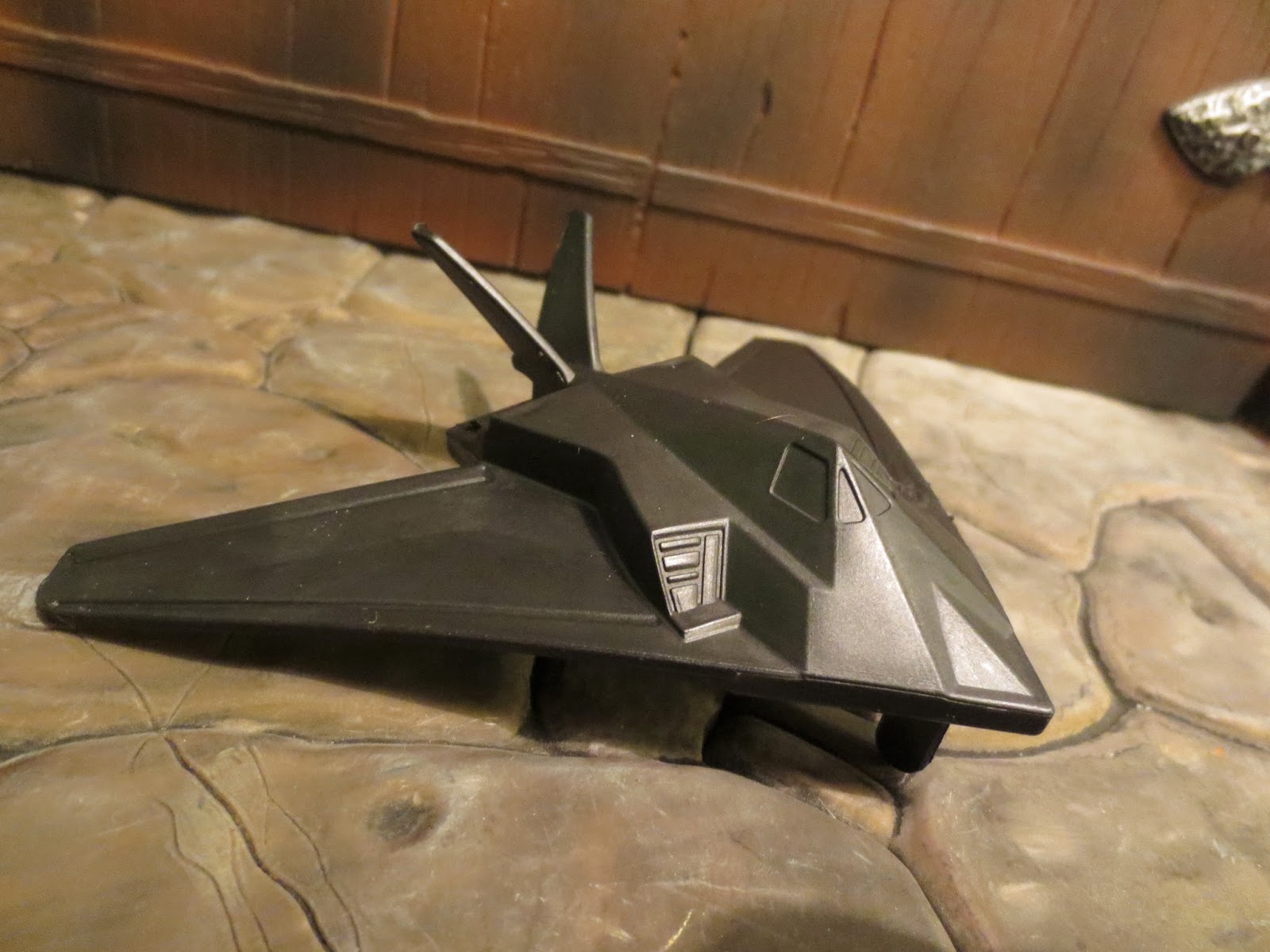 Remember: I'm writing about each piece as if it were an enemy or obstacle in a 1980s NES game. You know, like in the cool little instruction manuals those games came with. And yes, I realize this is really weird. Feel free not to read!

Mega Bomber: Listen for it's distinctive sound! It drops a number of rockets as it flies across the screen. These can damage both the player and enemies. It can't land because it has no wheels!
(Really, though, there are clips for axles but no axles or wheels included.) 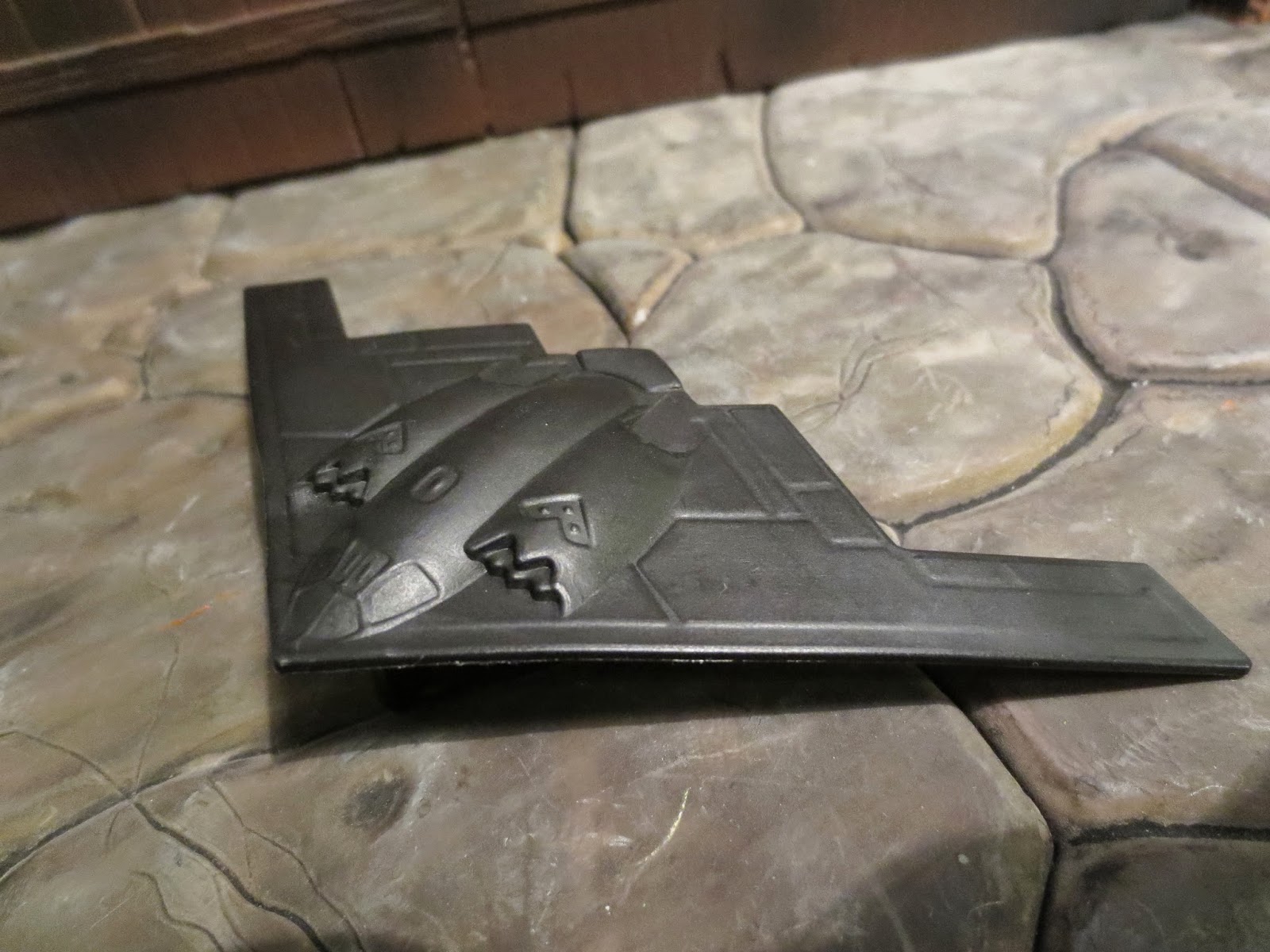 Stealth Bomber: The stealth bomber is an ultra secret prototype that gives no warning as to when it is coming! It drops one projectile that destroys everyone standing on the ground. Jump to avoid it's blast radius! (It also has no wheels.) 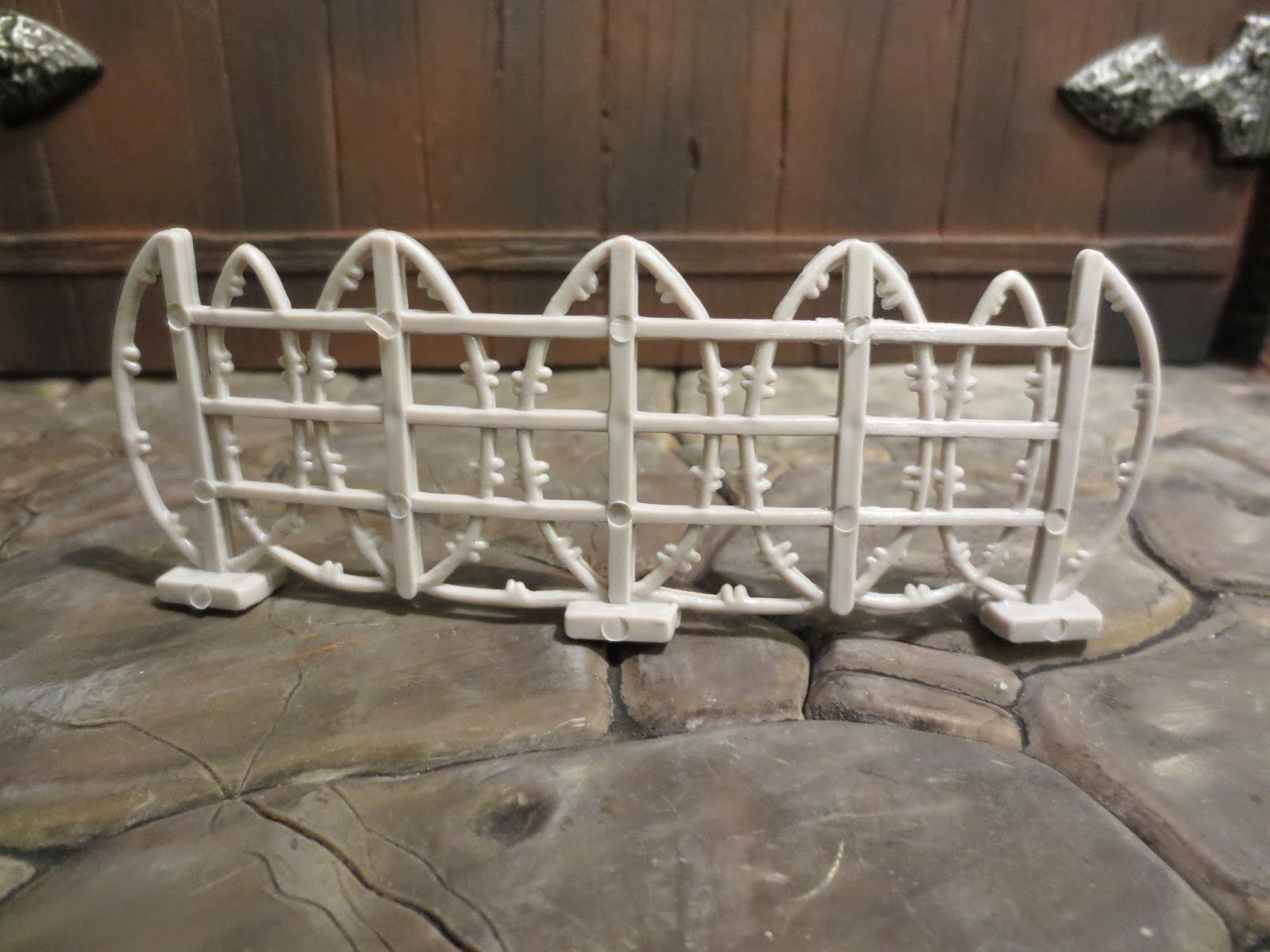 Barbed Wire Fence: Used by the enemy forces to keep your commando out! Jump high over this fence to avoid taking damage from it's sharp barbed wire covering! Watch out for electrified versions in stage 5! Flag: The enemies have captured your bases. Retake American flags to gain an extra life!

Also, it's interesting to note that this flag only has 45 stars on it, which would make it the U.S. Flag from 1896 through 1908 when Oklahoma was added to the United States. 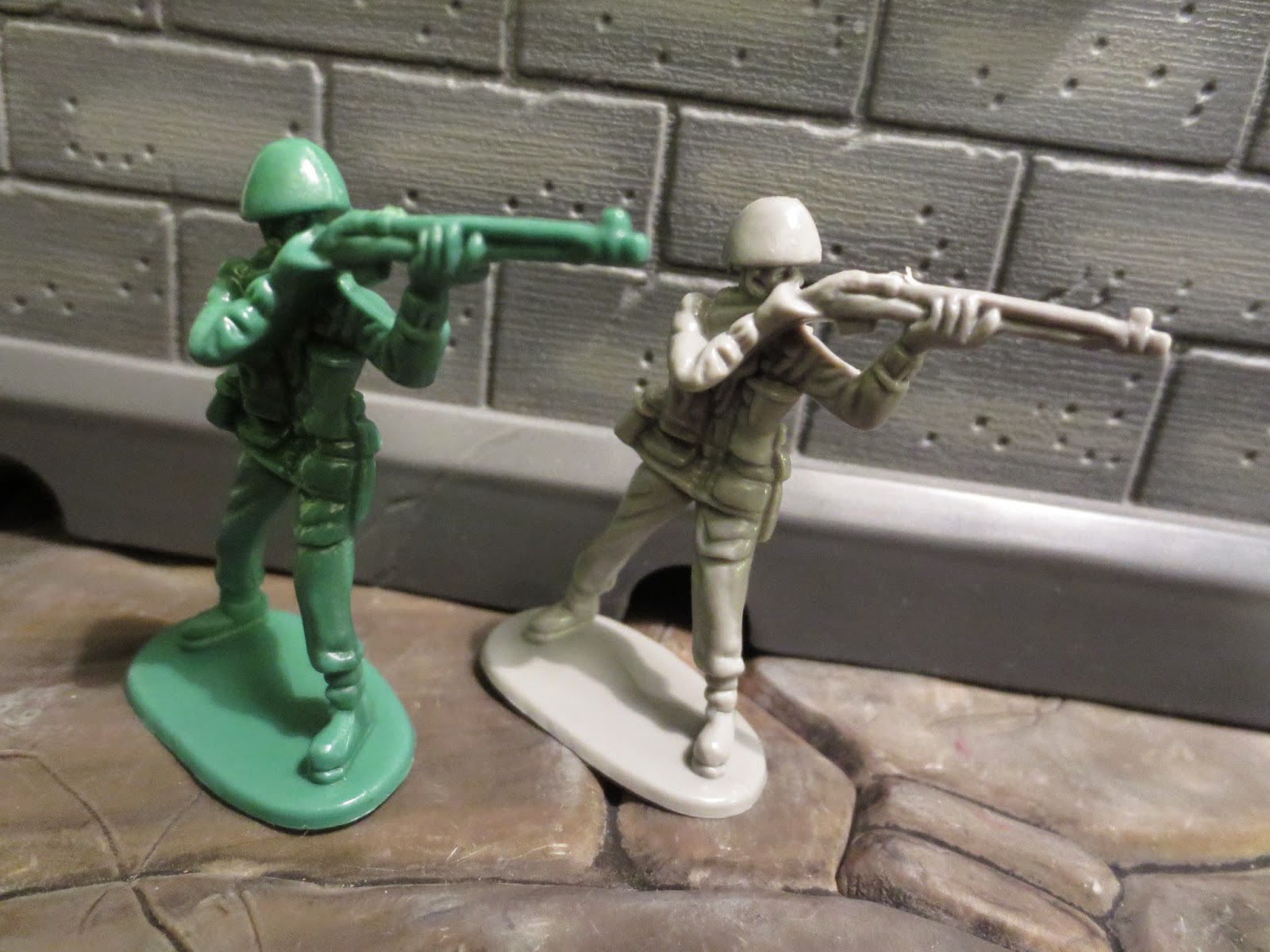 Sharpshooters: Deadly snipers trained to hit their targets! They can pop out of doorways and from around corners! Duck to avoid their fire. 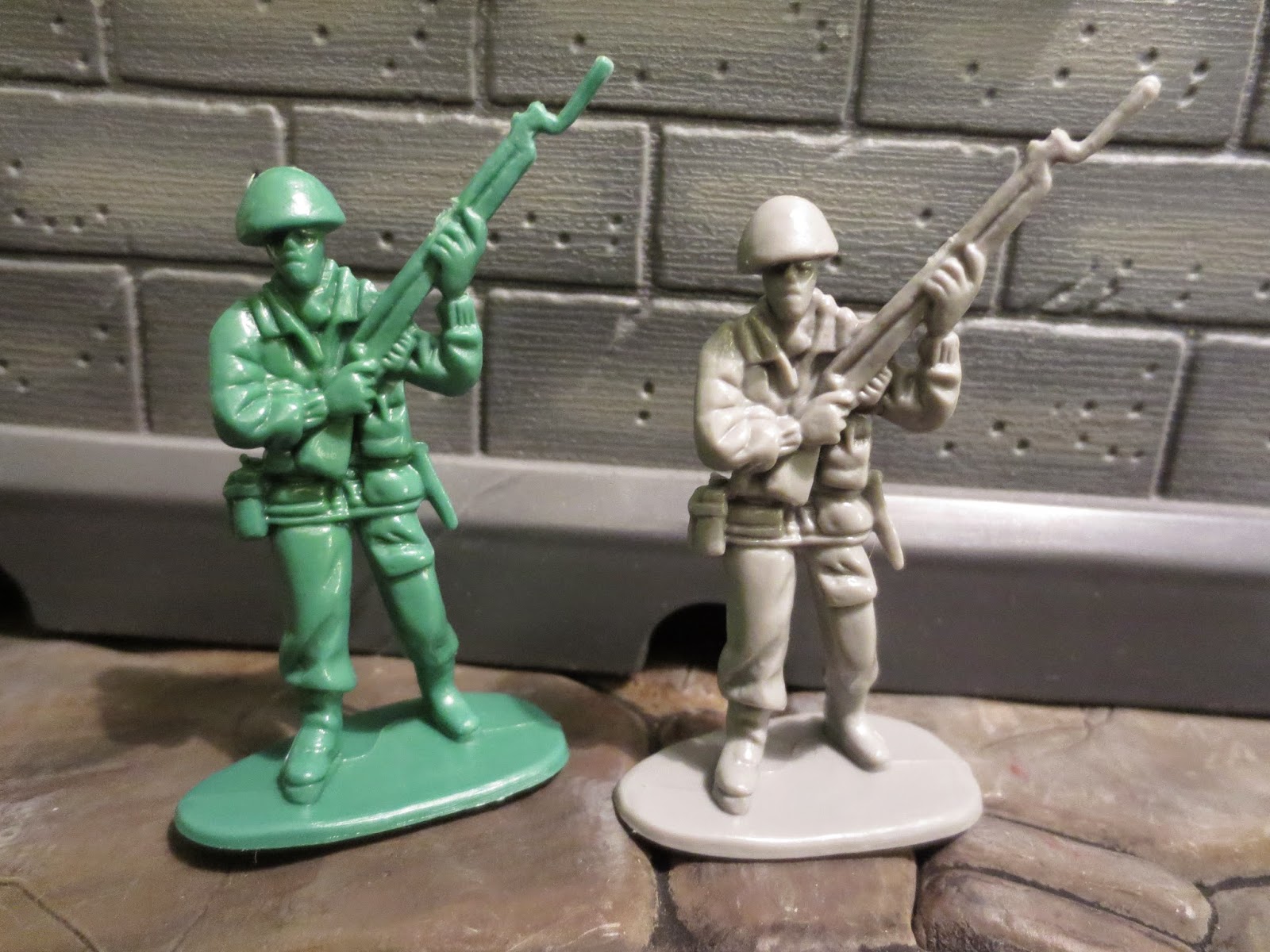 Sentries: Sentries will stand guard until you get too close, causing them to attack with their bayonets. Take them out from a distance! 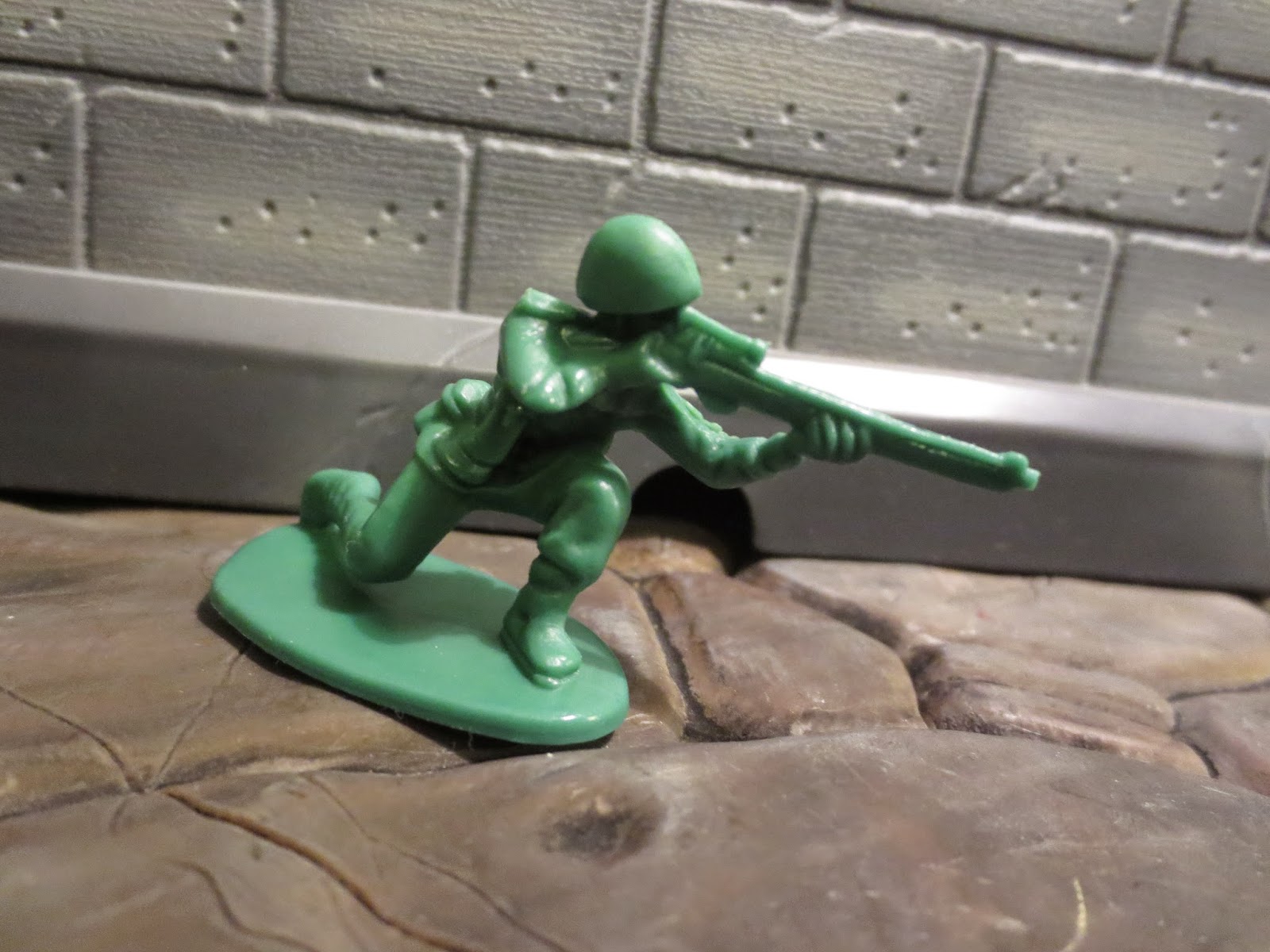 Snipers: Highly trained marksmen who can pop out of windows, doors, and from behind obstacles. They tend to fire and return to cover quickly. Jump to avoid their projectiles! 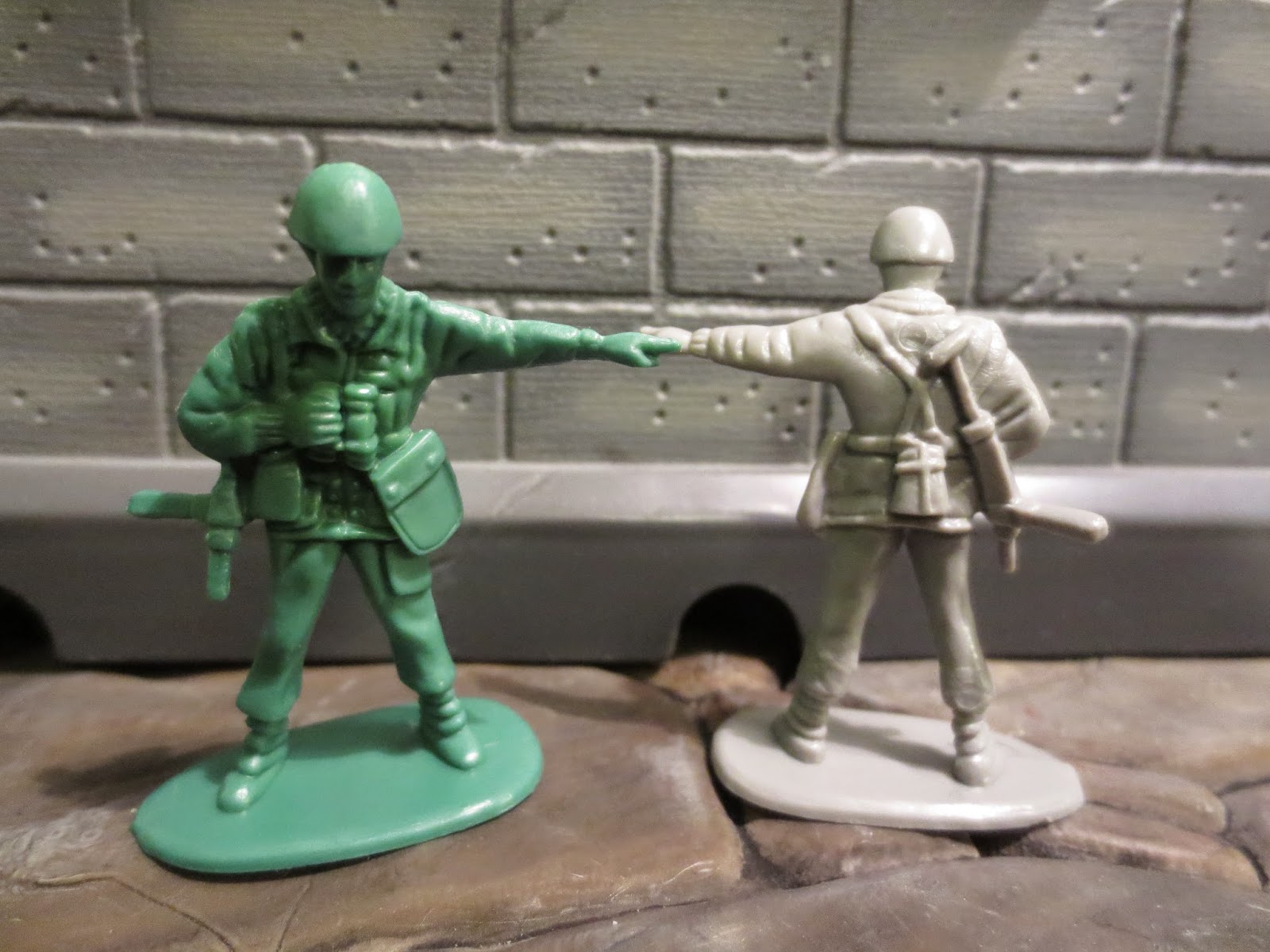 Scouts: Scouts are diligent in watching out for the enemy! When they see the player character they will sound an alarm and hunt down the player with their submachine guns! Take them down from a distance or avoid them at all costs! 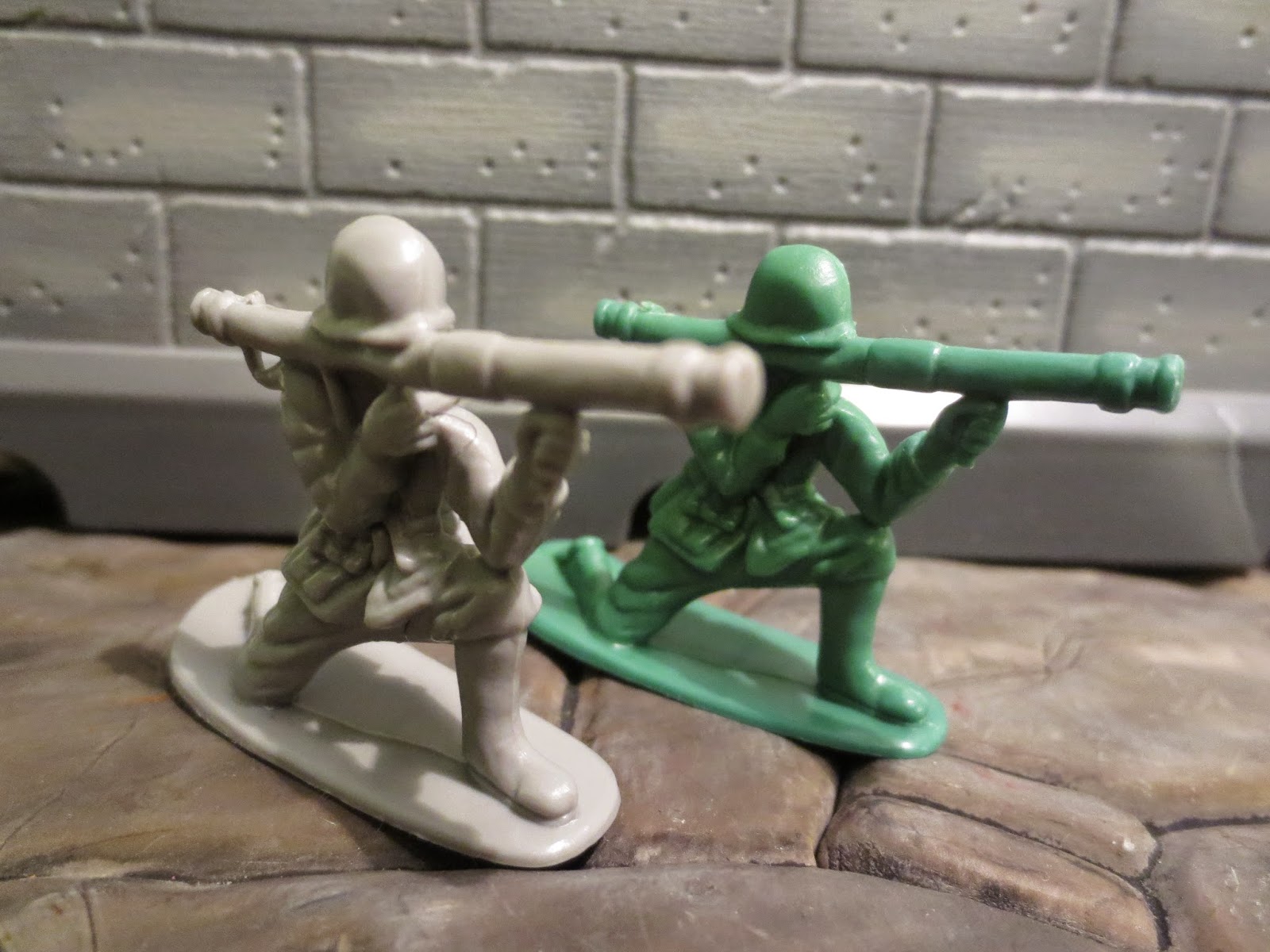 Bazooka Troopers: Heavily armored and packing the latest high tech bazookas, Bazooka Troopers can be a real problem. Leap to avoid their slow moving projectiles or otherwise be destroyed by their powerful blasts. 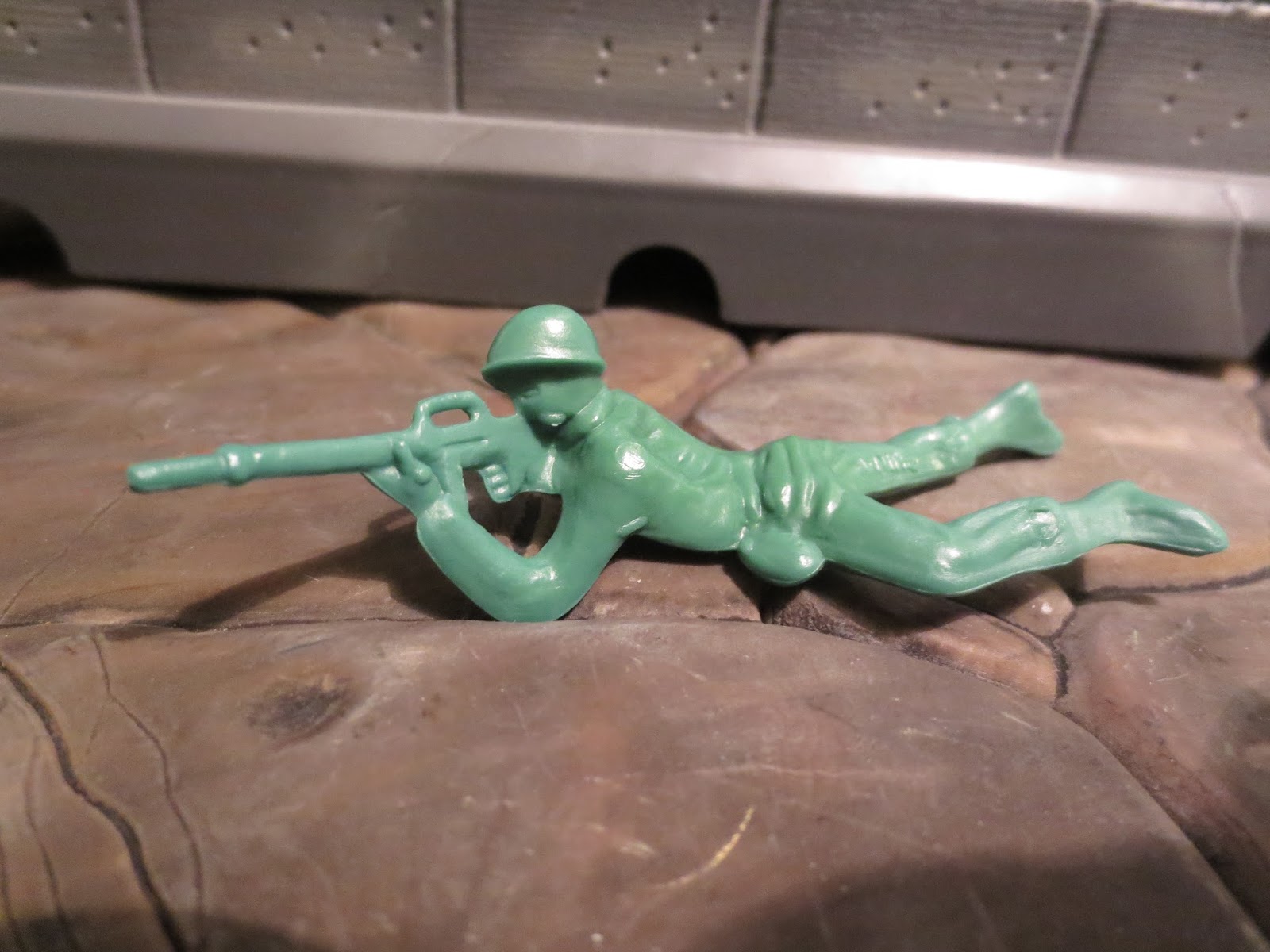 Ambush: Ambushes lie in wait to pop up and fire off a series of three projectiles with their machine guns. Throw a grenade to take them out before they pop out or avoid their fire. They like to hide in tall grass and underwater! 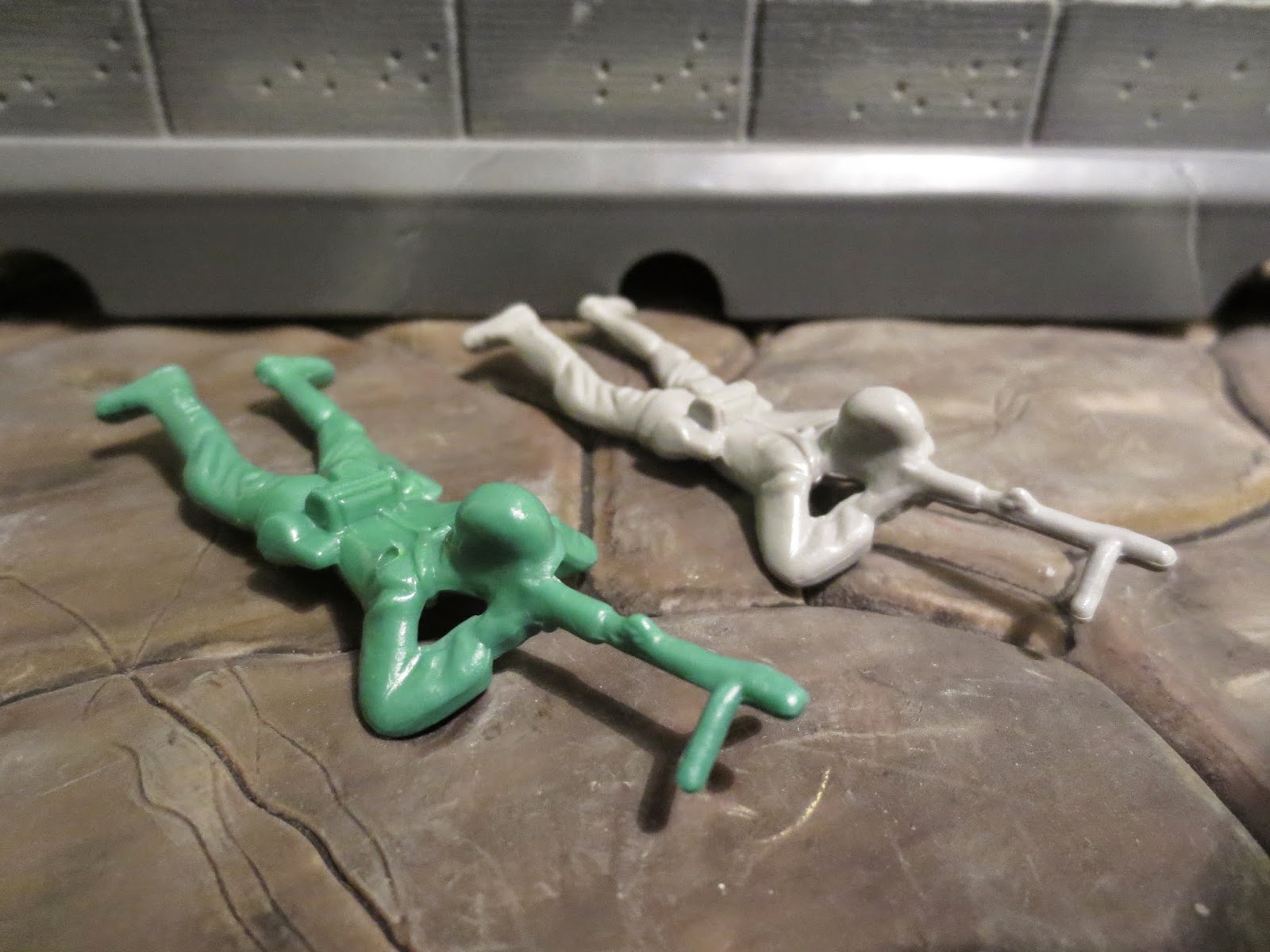 Gunners: Packed with powerful machine guns, gunners like to find a high perch and rain down a steady stream of projectiles from above.  A well placed grenade should effectively neutralize these menaces! 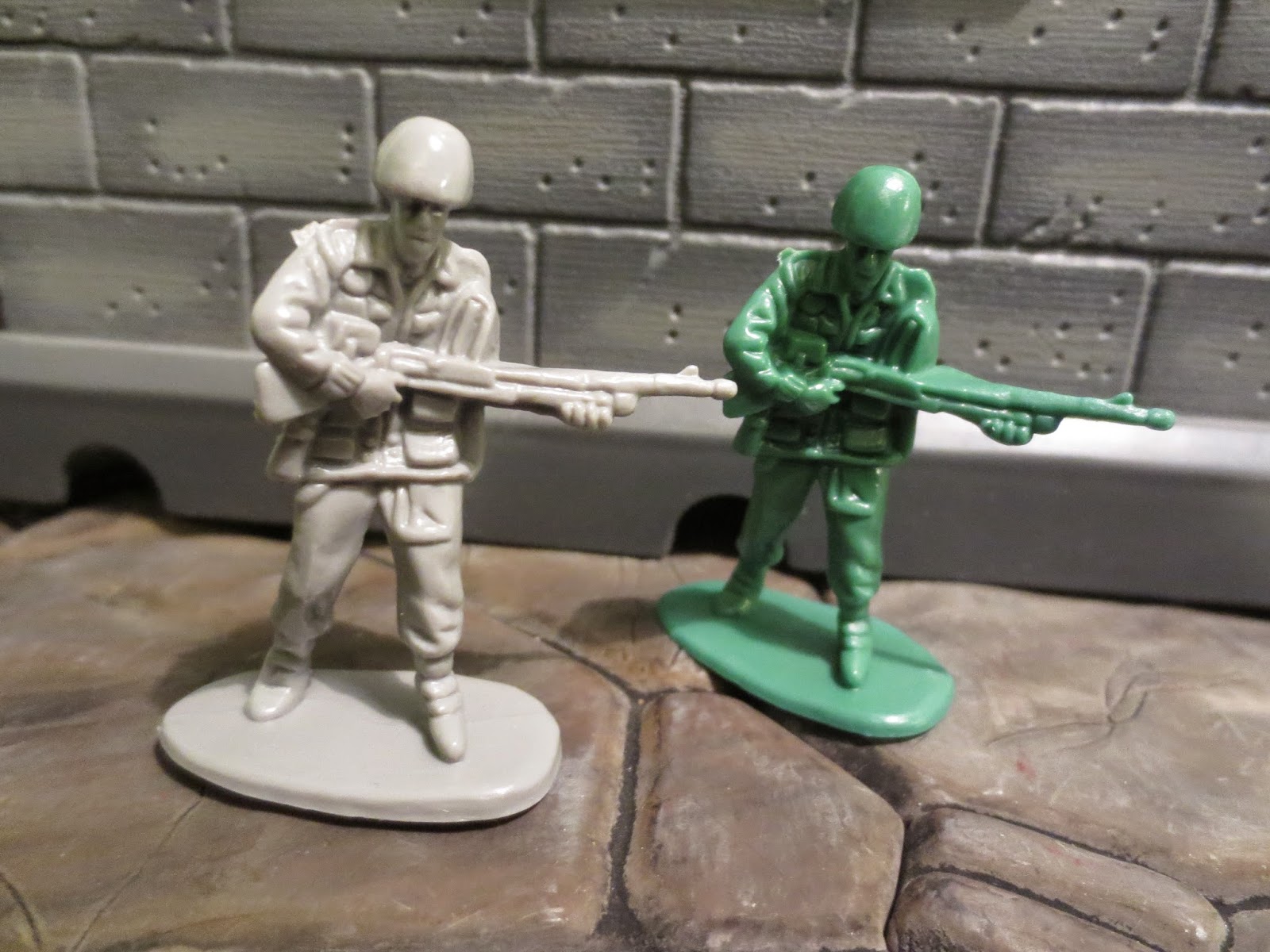 Commando: Commandos will patrol a designated area and approach while firing rapid bursts of projectiles from their machine guns. They never need to reload so be careful and take them out as soon as possible. 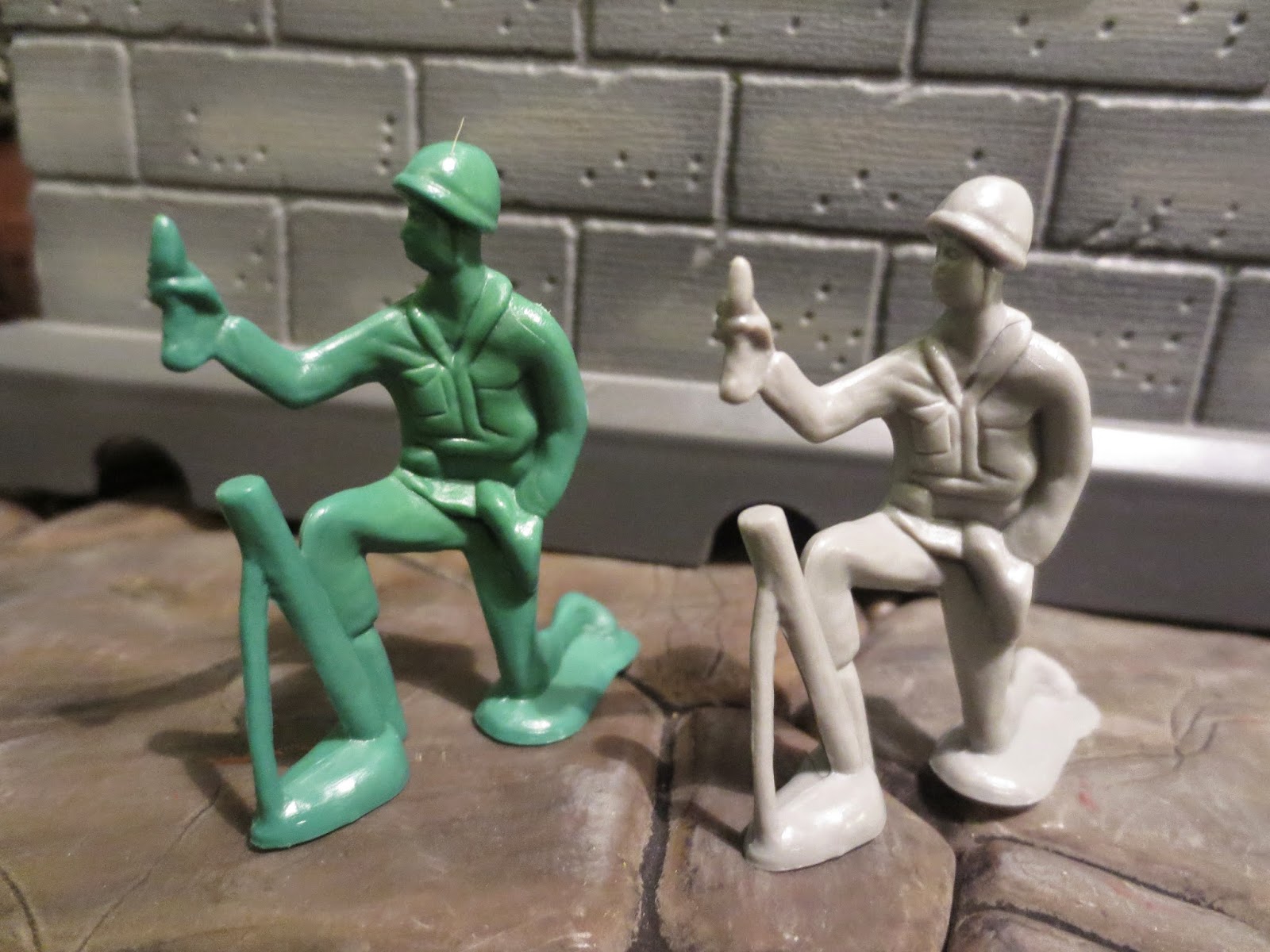 Blooper: Bloopers like to find a safe place of cover and drop mortars in an arc onto the players head. Either use a well placed grenade of your own or dodge their fire and take them out up close. 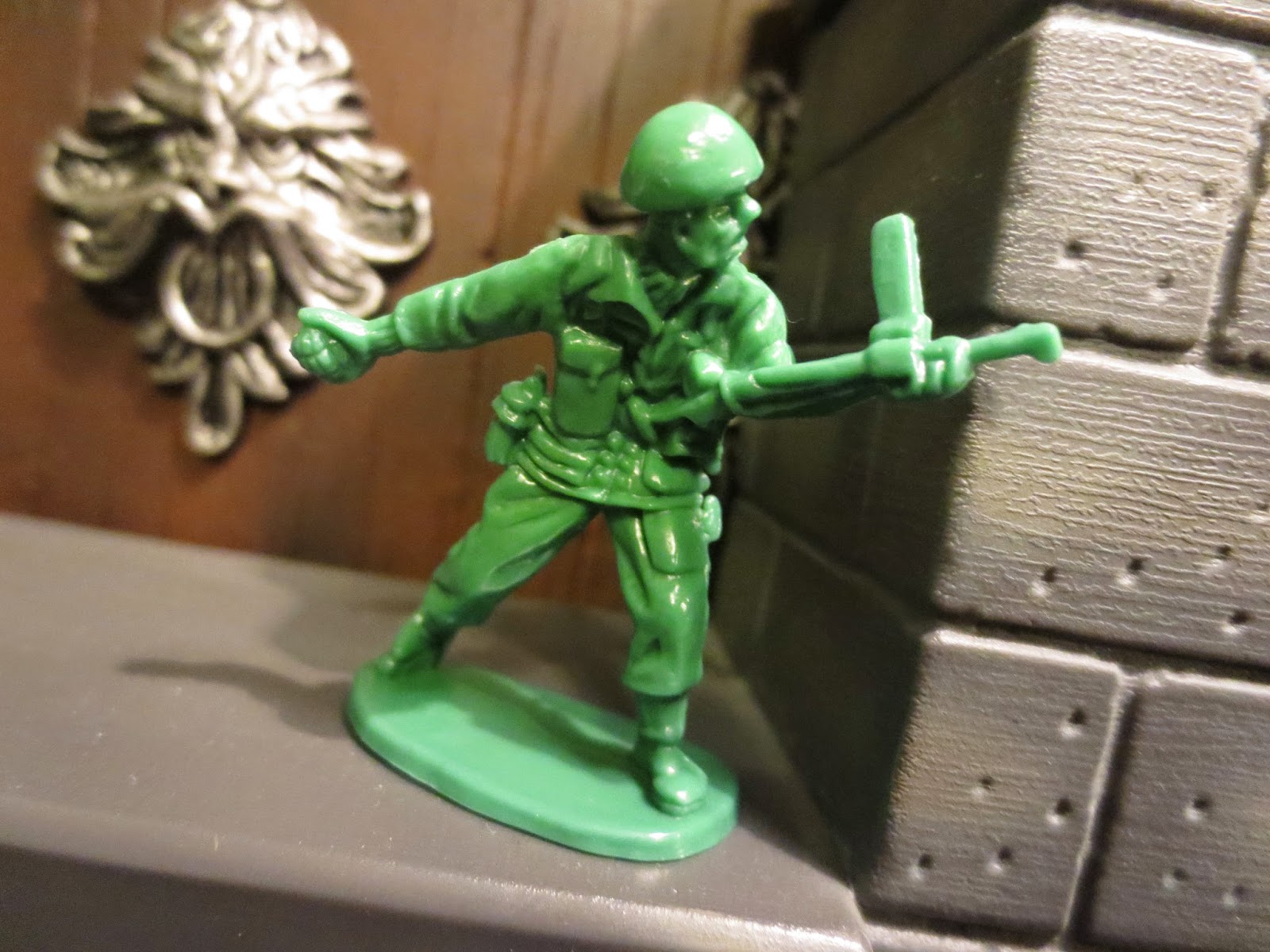 Kamikaze: Kamikazes run towards the player firing three shot bursts and throwing grenades. Dodge their weapons and attack them from behind for the best results! 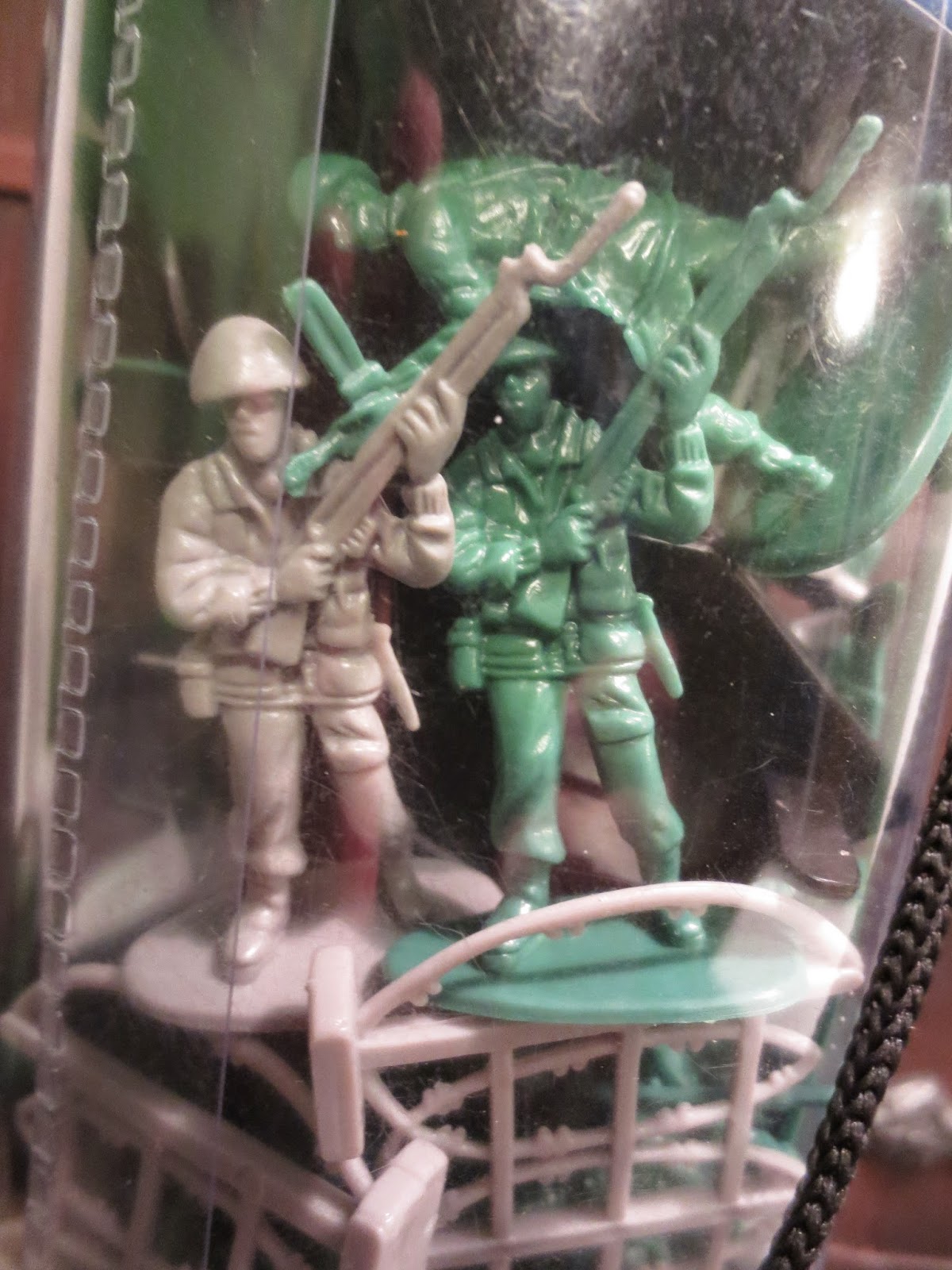 I think I've seen everyone of these army men sculpts before. These aren't the best army men, as they're a bit "flat" in places, but they're not the worst, either. I have some older sets of army men from my childhood that have many of these same sculpts. I've always loved the grenade throwing guy with the submachine gun (I called him Kamikaze) so I'm glad to see him included in this set. As a kid, whether I was playing with ninjas, army men, scuba divers, pirates, or any other plastic figure, I always thought about them as the pixellated characters from video games, so it's been fun imagining what would be written about these guys in an instruction manual. For $6 bucks, this isn't a bad little set. I'm not sure why the flag has only 45 stars or why the bombers have no wheels but for less than 10 cents a piece, you can't go wrong with these. I'm giving them a Good and a 1/2, because how can you really go wrong with plastic army men?

I've reviewed another tub of plastic minifigures: Monsters by Hing Fat
Posted by Barbecue17 at 2/02/2015