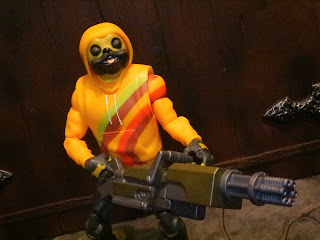 More Fortnite: Legendary Series figures have dropped! It's weird how randomly these come out, but then again I kind of like that. Today I'm checking out Doggo who is a dog. Or someone dressed as a dog, maybe? Honestly, I have no clue. Doggo definitely seems like a anthropomorphic dog rather than a person in a costume due to how expressive his face is. He also reminds me of a 1980s Taco Bell due to his colors, which is just amazing. Ready for a hoodie wearing dog in vintage Taco Bell colors who is carrying a minigun? Then join me after the break... 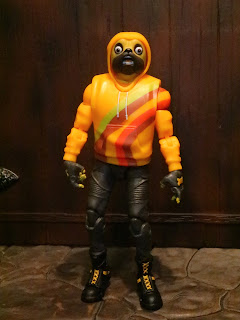 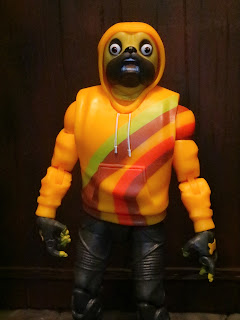 * Doggo is a dog in a really bright hood. He's not the most interesting figure in the line but, in hand, there's something really cool about him. What the heck is his deal? With last year's Overwatch Ultimates series I was compelled to dig into the game's lore and learn about the characters (despite having never played the game) but with Fornite having little actual story for characters I'm compelled to imagine a backstory for them. Why does Doggo wear a bizarre hoodie over tactical clothing and fight? The hoodie is actually a separate piece over his torso (the articulation is hidden underneath) and there are little dog bones on the back of his tactical gloves. Nifty! 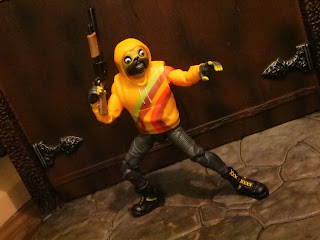 * Doggo has fantastic articulation. He is another very well articulated figures in the Fortnite: Legendary Series line. Everything works well, even his hinged hands, which is something that's been a real problem with most other figures in the line. 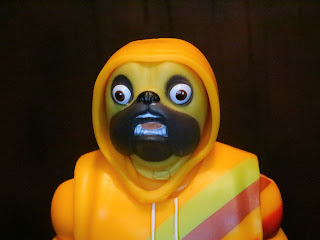 * Doggo has interchangeable face plates and they're really quite funny. The seam between the head and face plate is also nicely hidden by his hood, so they look even better. I love this surprised face. It's very expressive, just like he's barking because he heard the mail carrier go by. 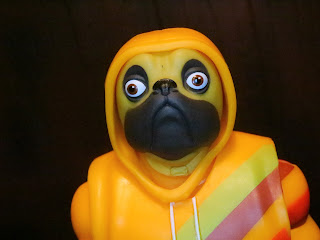 * Doggo's next face is kind of a neutral expression. Maybe he's just chilling out or maybe he's just watching some squirrels. He looks pretty mellow for sure, though. 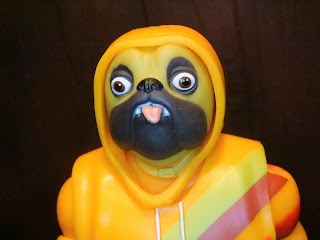 * Next up is a tongue out pose! Our adorable newest dog, Zoey Swift, likes to stick her tongue out briefly and then pull it right back in. Maybe that's what Doggo is doing? 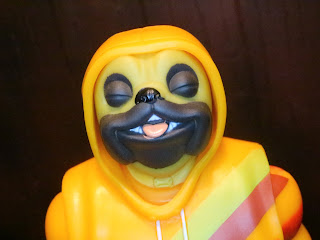 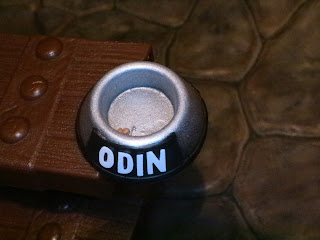 * Doggo comes with a dog dish that is actually a Back Bling, or backpack, for the character. It has a peg on the back that plugs in Doggo's back. This is a metal dog dish with a few leftover pieces of food dripping down and the name Odin on the bowl. Is that Doggo's real name? Or did Doggo steal another dog's bowl? I wouldn't put it past him. 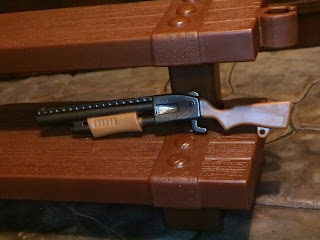 *  To prove that his bite is worse than his bark Doggo comes toting a Pump Shotgun, which is modeled after the Common, Uncommon, and Rare versions of the weapon. It's a pretty standard shotgun design although it certainly has the boxy look to it that most of the Fortnite weapons seem to have. We've seen this a few times before (with Peely and Rust Lord) but it's a good accessory and I don't mind having another. 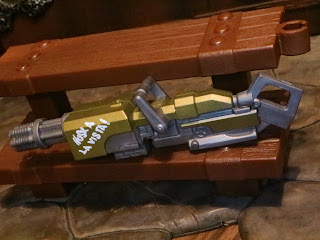 * For those times when you really want to let the dogs out Doggo comes equipped with a minigun. This thing is sweet. It's big, boxy, has six barrels, and it has "husk a la vista" written on the side. Doggo can carry this with ease and he looks awesome holding it. 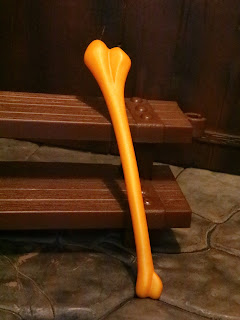 * Dogg's melee weapon is called Chew Toy. It appears to be a oversized gold dog bone. It's not the most elaborate Harvesting Tool in the line but Doggo can hold it well and he looks pretty funny carrying it. 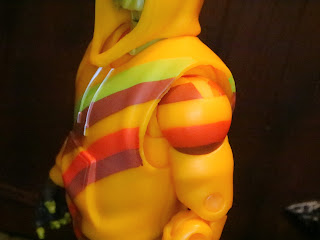 * The sleeve holes on Doggo's hoodie are pretty large and they look kind of odd from the side. It's just a little bit visually unpleasant I guess you would say. 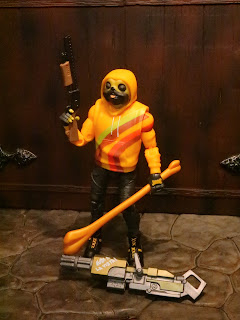 Doggo was actually not one of the figures I was most looking forward too, and I still think his outfit is a bit dull, but darn if he isn't an incredibly solid toy. Four interchangeable face plates and some cool accessories (seriously, the minigun is pretty sweet) really help complement a well articulated toy. If you're a dog lover this guy is pretty irresistible. He's a Great and a 1/2 figure and another entry in this series.

It doesn't have anything to do with Doggo but I do want to bring up how strange it is that Jazwares has only released one female figure in this line, Valkyrie. I can't think of any modern action figure line with this few female action figures in it. What's even more strange is that the 1/18th scale series by Jazwares has dozens of female characters, so why not in the 6 inch line?