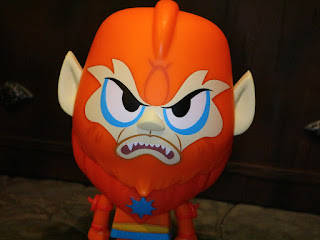 I haven't done a Barbecue's Bonfire for... sheesh, a couple years, but I'm going to try to bring it back. It's my place for lots of weird little things that don't fit within my usual review structure. What to talk about?

First, have you noticed the newest character to get their own review archive? It's Beast Man! Beast Manor is the new home for all of my Beast Man reviews! OK, well it's not super new (I opened it in May) but it's the newest and worth pointing out.

Second, I've been working on 2020's 31 Days of Toy Terror countdown since July 1st! That's why I didn't do a Masters of the Universe themed series for this month. I probably won't until November, either, just because getting Halloween stuff together takes some serious time. This year I'm going to focus on "horror" toys made before the year 2000 (though I can be incredibly loose on the definition of horror). What lines or individual characters from before the year 2000 would you recommend I check out?

The last thing I want to check out today is the current list of my most popular articles. It's interesting to see what attracts the most attention among readers. For ongoing most popular we've got:
Nocturna from He-Man/ New Adventures- My guess is there probably are few other reviews of this guy out there so when someone does look for him this is where they go.

Scarlett and Snake Eyes from G.I. Joe Classified Series- I'd wager that this is currently the hottest line out there right now and many folks are still trying to track down the first series, not to mention the impossible to obtain Target exclusives.

Fishstick from Fortnite: Legendary Series- While he's one of my least favorite recent Fortnite releases people seem to love Fishstick. He's got some cool accessories, though, and a really cool vibe about him. He's just chilling, you know? My Fortnite reviews always seem to do really well, probably because of the popularity of the game and the smaller number of reviews of this great line.


Well, back to the regular reviews. I'll try to aim for one of these again next Friday!