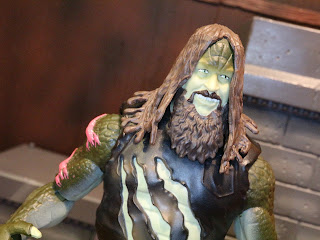 How crazy is it that we're living in a world where I've now reviewed five Bray Wyatt action figures and I'm getting ready to look at a sixth (there are a few others out there, but they weren't unique enough for me to bother grabbing them)? Bray Wyatt is one of my favorite WWE Superstars and his horror vibe always makes for a cool toy. Today I'm looking at a crazy release from the WWE Mutants sub-line and it's Bray Wyatt as an alligator. I actually traded a Goldust figure to a friend for this guy, and you know what? This is not the second Alligator Bray Wyatt figure in my home. Earlier this year when these first started showing up my 3 year old decided that she wanted this action figure in her Easter basket. She received him for Easter and still loves to play with him (you know how 3 1/2 year old girls are with their mutant alligator wrestling figures based on a crazed backwoods cult leader), but since we already had one in the house I decided to hold off. When the possibility of a trade arose, though, I couldn't exist. I now have my own alligator mutant Bray Wyatt and I decided the time is right to review him. Check out this absolutely insane action figure after the break... 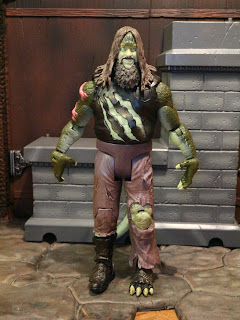 Accessories: None (although the tail comes packaged separately, but isn't removable once assembled). 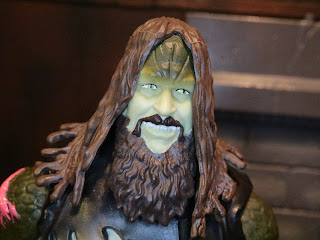 * This is a really awesome headsculpt. It's clearly Bray Wyatt but much more sinister looking. His beard seems longer and more unkempt and his hair seems stringier, falling with the appearance of being wet. There's also clearly some alligator like scales on his forehead and a maniacal grin across his face to reveal his sharp teeth. I love the appearance here as it actually makes this a pretty terrifying action figure. 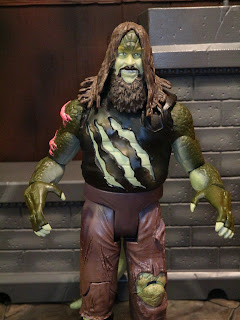 * Unlike the WWE Zombies (with their mixture of new and reused parts), the WWE Mutants all seem to have unique sculpts to better convey their unusual mutant appearances. Bray has a similar build and outfit to his non-mutant self, but his clothes have been torn to shreds and he's covered with scales. The paintwork is pretty good on the body (less so on the clothing) with some excellent texturing and detail work. While more "serious" wrestling collectors might not be able to fit these into their collections, I guarantee superhero and TMNT collectors can find a place for a human/ alligator hybrid man. 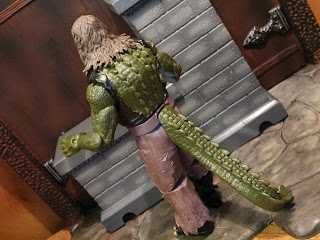 * Turn Bray around and you can see that he's sporting a serious alligator back and tail. Imagine this guy swimming around in a swamp and you've got some prime nightmare fuel running through your head. He just feels really cool in hand thanks to the various bumps and ridges. 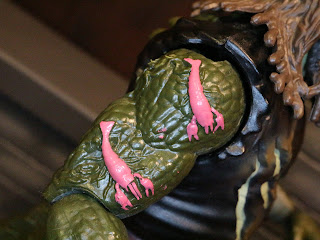 * On Bray's right arm are some crawfish. I have to admit that this actually makes me kind of hungry as I love crawfish, but they're not a real common food around North Carolina. They're delicious though and you should give them a try. While the sculpt here isn't amazing, it's a cool detail and it reminds me of the crazy detail work often found on the original Playmates Teenage Mutant Ninja Turtles action figures. 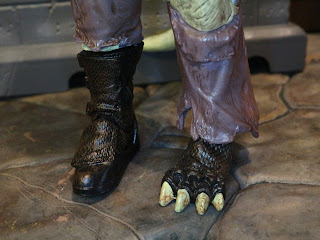 * To show the effects of his mutation, Bray is actually sporting two different feet: While his right foot is still in a swamp boot, his left foot is sporting alligator like claws and has burst through the material of his boots. He's also got some great tears in his pants, especially on the bottom left pant leg. I like how this piece just looks like it's hanging down. 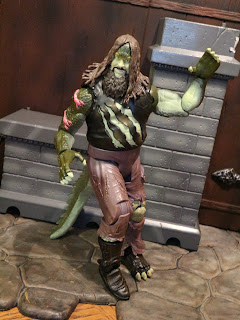 * Mattel essentially has two different WWE product ranges: Basics and Elites. Elite figures have more articulation, like a Marvel Legends figure, while Basics are missing the mid-torso hinge and have less leg articulation. While these Mutants figures are essentially basics (Bray is also missing a swivel bicep), they still have a lot of nice movement and feel like solid, durable figures. They look great on display and are really fun to play with.They're far above most other figures in this price range that you'd find at retail. 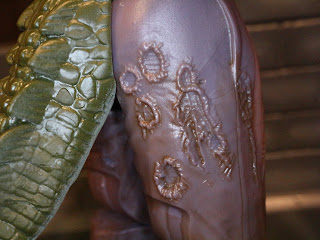 *Bray's pants are sculpted with lots of rips and tears, but most of them have received no paintwork. The parts of his flesh peaking through are the same shade of purple as his pants (the color his legs are molded in). 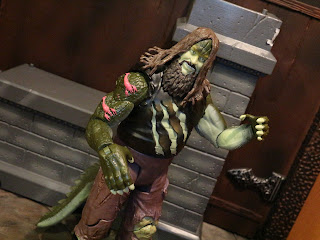 I gotta admit that, as someone who enjoys both WWE and unusually crazy toys, I love what Mattel is doing with the WWE license. They are still releasing plenty of serious and accurate WWE action figures, but they're also really branching out and doing some fun stuff with the line. Are kids eating these up? I don't know. I know I am (and my daughter, too). While professional wrestling doesn't seem as outlandish as it used to be, these toys make me long for more truly ridiculous elements to make their way into the sport. Bray's a Great toy, plain and simple.

I've also reviewed a couple of other WWE Mutants, including: