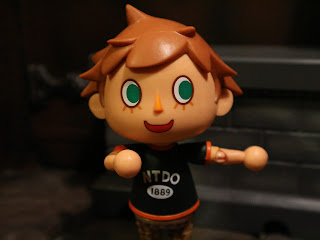 Today I'm checking out another World of Nintendo figure from series 2-3 which, with series 2-4, sneaked out at the end of the year and has just started to saturate the market. Well, as much as World of Nintendo figures can saturate the market, anyways. The Villager is from Animal Crossing and, like yesterday's Inkling Boy, it's another Nintendo game I've never played. I'm only passingly familiar with it and it's never quite seemed like a game I'd spend much time with. Being a huge fan of this series of figures, though, I was happy to give the Villager a home due to his Mii-styled vibe and his cool Nintendo t-shirt. He's a completely unique sculpt, so that's worth a look at least, right? Let's check out the villager a bit more closely after the break... 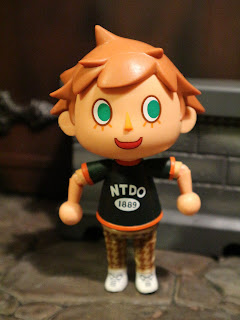 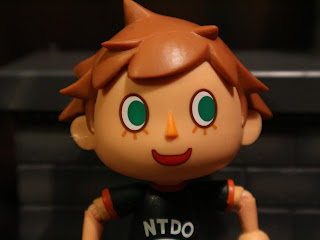 *I really like the villager's headsculpt and funky hairdo. It's kind of generic, but that seems to fit in with the character's role in Animal Crossing; he kind of stands in for the player (there are female versions, too, so maybe Jakks will release one at some point). The paint work is nice and, once again, Jakks has done a nice job of translating the Nintendo style into a three-dimensional action figure. 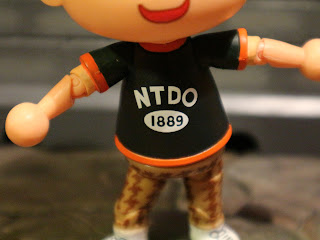 * The Villager's shirt is really cool. It's a black ringer t-shirt with orange trim and the words "NTDO 1889" across the front. That obviously stands for Nintendo, with the 1889 representing the year of Nintendo's founding (September 23rd, 1889). 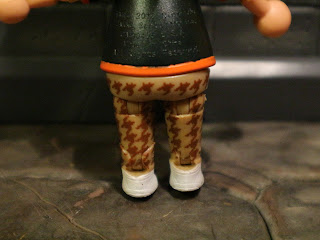 * Is the Villager borrowing Enzo Amore's pants? Because that's what it looks like. I love these funky colors! 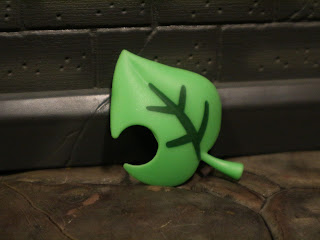 * The Villager's lone accessory is a leaf. This is different from the leaf included with Tanooki Mario as it's a bit larger and looks more like an actual leaf. I have no clue as to the significance of the accessory, though (although there is a game called Animal Crossing: New Leaf). 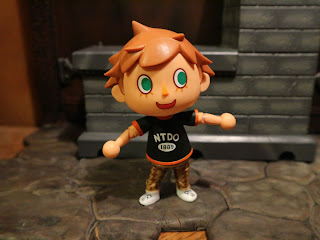 * The articulation on the Villager is really strange. The hips are oddly placed right at the bottom of the waist while the shoulders don't actually fold down against the torso; they pretty much just jut out from the torso. Articulation can be the biggest weakness of figures in this line and the Villager suffers for it. 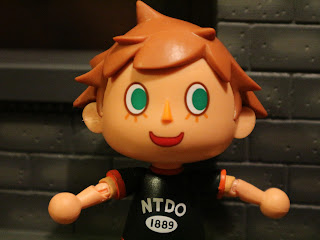 The Villager isn't a figure I would have asked for in this line but his inclusion is rather interesting. He's not an incredible figure but the headsculpt and t-shirt are quite nice. It's odd that Jakks chose to include the Villager as a completely original sculpt in place of other characters from more prominent properties like Super Mario Bros. or the Legend of Zelda. This is a Good figure but now one of the ones I imagine most collectors will really be tracking down as I'm not really sure how this guy fits in alongside of the other characters in the line.

This is the only Animal Crossing based figure I've reviewed thus far, but I have reviewed plenty of other World of Nintendo figures including: