Action Figure Review: Skeletor (Leo) from Masters of the Universe ReAction by Super7 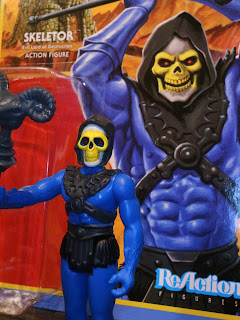 Today I'm doing a super quick review of the recent Leo Toys variant of Skeletor from Super7's Masters of the Universe ReAction. Like the Leo Toys Faker I reviewed last week, Skeletor is also based off an interesting color variant released in India in 1987 by Leo Toys. Super7 really seems to dig releasing unusual color variants, but that works since the fans seem to like them too. Honestly, this is a really cool looking version of Skeletor due to the darker colors. I've reviewed a few different ReAction Skeletors already, so there's not a ton of new stuff to say, but it's still worth a peek and a few pictures. Let's check out the Leo Toys Skeletor after the break... 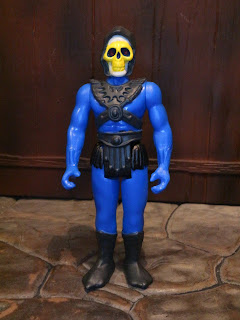 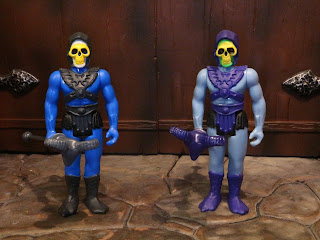 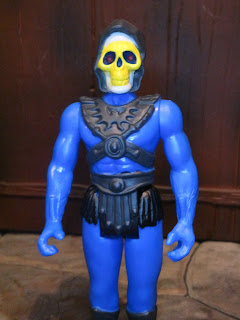 * As you can see, Skeletor has the same sculpt as the other versions before him but the colors are different. His skin is a much darker, deeper blue and it looks fantastic. Seriously, it looks very nice. His black armor also pairs well with the blue, making for a rather cool look for Skeletor. I love it. It's quite different so far as colorways go, and yet it still feels like Skeletor as well. 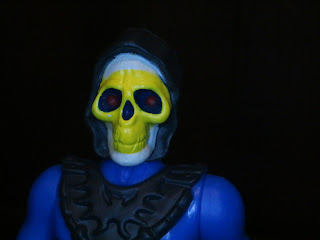 * The headsculpt is still fantastic, as usual, but the bright yellow skull looks very cool and evocative of some of the minicomic appearances or even the Filmation cartoon. There's a bit of lighter blue or grayish color on the top and bottom of his skull as well, which adds a little variance and is faithful to the original design. Of course, we get some deep set red highlights inside of Skeletor's eye sockets, too, which makes him look all the more evil. 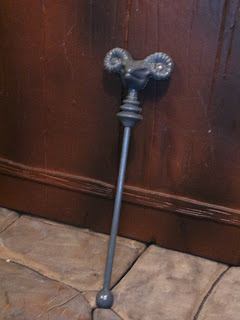 * Skeletor comes with his trusty and troublesome Havoc Staff, this time molded in charcoal grey rather than the standard purple color. 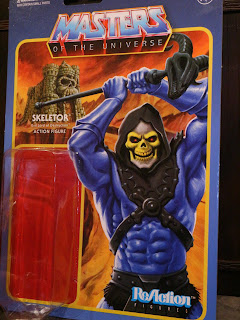 *  The card art on most ReAction figures released by Super7 is beautiful and their Masters of the Universe line is no exception. Skeletor features an awesome illustration of the character done-up in these variant colors.  To preserve the card I actually made a slit in the top of the blister so I can slide the figure in and out. It work great and allows the figure to be displayed inside and outside of the card. I've got mine hanging on a metal pegboard similar to what you'd see in a retail store! 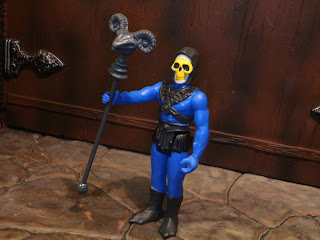 It's tough not to like a Skeletor figure and this is another Great one. Yeah, he's an obscure color variant, but he's a very slick looking one. Super7 has really been putting out some very interesting stuff in the ReAction line and since you can purchase each figure individually (you don't have to buy a full series like with MOTUC or Club Grayskull) fans can just grab the ones that appeal to them. This one definitely appealed to me and I'm thrilled to have him on my now rather sizable rack of MOTU ReAction figures.