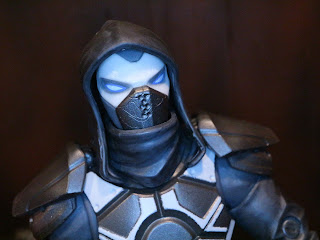 Today I'm checking out Enforcer, the final figure in Jazwares' first series of Fortnite: Legendary Series and I'm pleased to say that it's another very, very solid action figure. I reviewed the first figure I picked up from this series back in July and I ended up picking up the rest of the figures here and there. A second series has been announced and so far we know that Leviathan, Valkyrie, and DJ Yonder are on the way. Hopefully the line has a good long run as it's turned out to be one of the most fun I've picked up this year. For the $20 asking price (which, let's be honest, is the standard going rate for articulated, 6 inch scaled action figures), you're getting a lot. Multiple face plates, excellent articulation, and quite a few accessories. The quality is definitely here and these are some of the most playable action figures in recent memory. I'm curious how many collectors are like me and are picking these up with little to no knowledge about Fortnite. Good toys are just good toys, y'know? Let's check out Enforcer after the break... 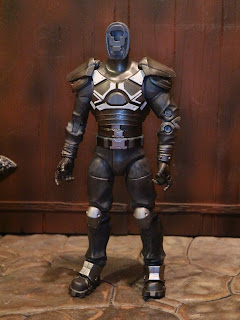 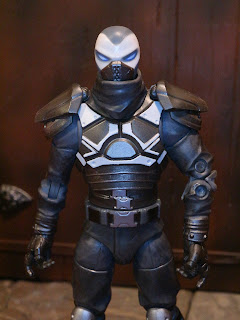 * The Enforcer has one of those generically cool looks that really just doesn't disappoint. He doesn't stand out necessarily, but you're not going to be disappointed once you check him out. His armored battle suit is really made with lots of cool armored panels and neat, clean paint applications. 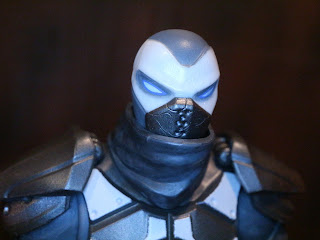 * I like Enforcer's headsculpt. He looks like Spawn to me. There are three face plates that can snap on and off of the head, allowing you to give Enforcer new expressions. The first expression, and probably the default is a standard angry expression. His eyes look like he's staring some villain down as if he's ready for battle. 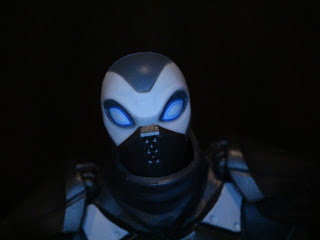 * The second expression is wide eyed. Yeah, while I assume this is a regular fellow wearing a mask, it's pretty funny how the eyes actually grow larger and change shape. Kind of like Deadpool or Spider-Man. 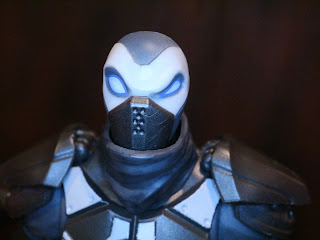 * The last expression is kind of quizzical. Enforcer has one eye wide open while the other eye is unusually shaped, as if he's not sure about what's going on. I'm assuming the characters are rather expressive in the game with this sort of focus on their facial expressions. It makes for fun displays and posing for sure.

* Enforcer comes with two pieces of headgear that come attached in the package, but they're both totally removable. The scarf around his neck and lower mouth and the hood are removable. Change things up if you like! 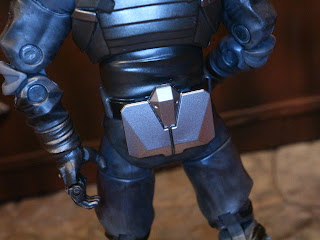 * There's an unusual piece of armor on Enforcer's lower back. Anyone know what it is? Maybe a portable laptop or data pad? Something to keep him from getting shot in the rear? lumbar support? 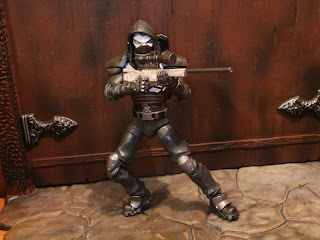 * Like the other five figures in the first series, the articulation on this guy is incredible. He feels sturdy, durable, and has articulation that feels like it could give Toy Biz's Marvel Legends line a run for its money. The inclusion of things like toe joints, lots of swivel hinges, double hinged elbows and knees, and butterfly pecs allow this guy to take some crazy poses and uses two-handed weapons with ease. 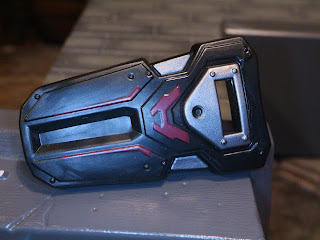 * The Subjugator is a "Back Bling" that looks like a riot shield. The Enforcer can wear it on his back for additional protection. It's a nice sculpt (a bit undersized) and features a few red and silver paint applications as well. 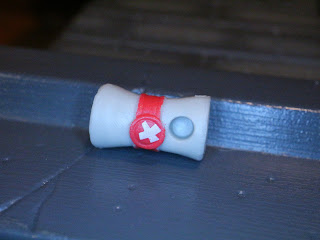 * To heal small wounds, the Enforcer comes with a set of Bandages. They're essentially a roll of bandages with a little white cross logo on them to indicate they're a healing item. They also have a small hole in the front so the Enforcer can grip the accessory securely. The thumb can fit in there, allowing for a better grip. 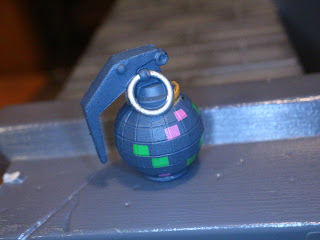 * The Boogie Bomb is a grenade that makes the other characters dance. It's a cool looking weapon that looks like a grenade mixed with a disco ball and it actually even has some colored panels on it. The Rabbit Raider had the same accessory, just FYI. 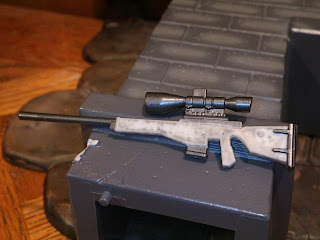 * The Bolt Action Sniper Rifle is a cool looking weapon. The Fortnite weapons have a sort of boxy, almost cartoonish looking feel to them, but the paint weathering and crispness of the sculpt still makes them shine. The designs for some reason make me think of how the weapons looked when you viewed them from Bond's watch in GoldenEye007. 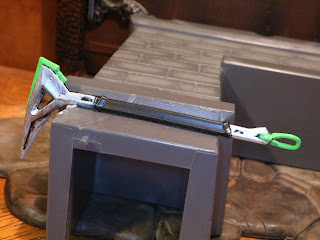 * The Caliper is a Harvesting Tool that looks like some sort of mountain climbing device. The green highlights on the blade and the loop at the bottom are cool, though. There's also some really nice weathering on the metallic bits. 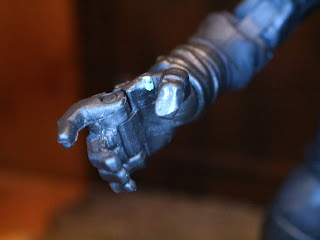 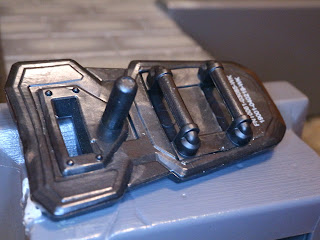 * The Subjugator riot shield is mainly designed to be worn on the Enforcer's back, which is a real shame. Seeing the handles here, I really wish it had been designed to be usable to the figure as an actual shield he could carry as well. Seems like a missed opportunity. 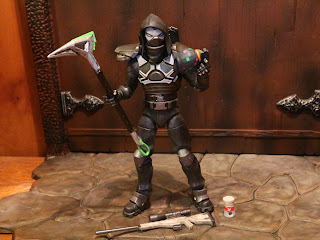 Enforcer is another Epic figure in this line. Seriously, Jazwares has greatly impressed me. They really seem to have put everything they have into this line and it really shows. I don't really collect much in the 1/18th scale anymore, so while I admired the 1/18th scaled Fortnite figures I never picked any up. These are now instabuys, though. If the quality is as good on Series 2 as on these guys, Jazwares could have an excellent, long-running line on their hands. If you support action figures with multiple portraits, great sculpts, and lots of unique accessories as reasonable prices, pick these up! They're brilliant.

This is the first figure of the Enforcer I've reviewed. For more figures from Fortnite: Legendary Series, check out the following:
Havoc
Rabbit Raider
Skull Trooper (Purple Glow)
The Visitor
Wild Card
Posted by Barbecue17 at 9/02/2019