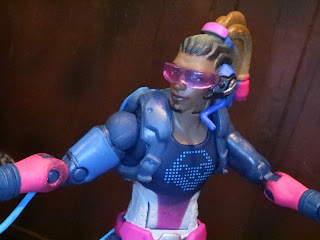 Back in July I reviewed the standard Lucio figure from the first series of Overwatch Ultimates and I ended up giving him an Epic rating: He's a really good figure! Today I'm checking out the GameStop exclusive version of Lucio in his Bitrate costume. This is a simple repaint (no new sculpting) and it just started making it's way to GameStop stores over the past month. This is one of the reviews where I'm mostly showing off what the repaint looks like since I've already reviewed the main figure. Is Bitrate Lucio as good as standard Lucio? Not quite, but he's not bad either. Read on and learn more after the break... 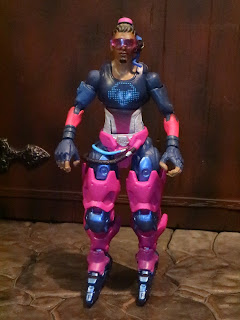 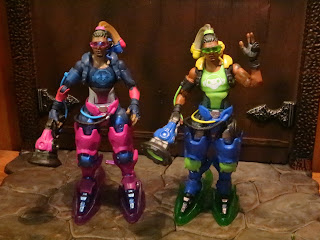 * On the left is Bitrate Lucio while the standard Lucio is on the right. I really like the standard figure better due to his color scheme being much more vibrant and, frankly, just more interesting, too. Largely they have the same pluses (great articulation, nice sculpting) and minuses (the cord for the sonic amplifier can fall off of Lucio's arm pretty easily). 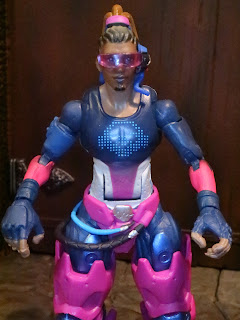 * Lucio still has a pretty bright appearance although this time we've got blue and magenta. Rather than a tank top, Bitrate Lucio is wearing a fitted shirt with a detailed emblem on the front. 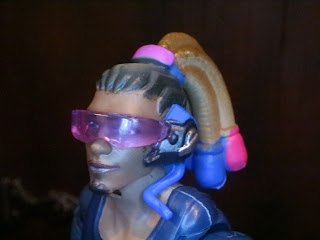 * Lucio's headsculpt looks great and the character features lots of cool little extras such as his cool visor, an earpiece, and his dreadlocks. The dreadlocks even have a swivel at the base, so you can pose them a bit. Cool, huh? 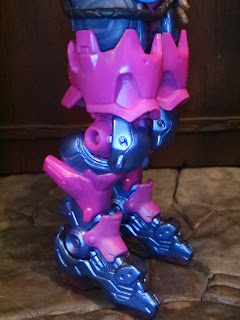 * I love Lucio's armored legs. I'm not sure if they're cybernetic or just heavily armored boots that his hard-light skates require but they look incredible. I'm really digging the detail and the color of these things. They definitely help make Lucio one of the most interesting looking characters in a line filled with interesting characters. 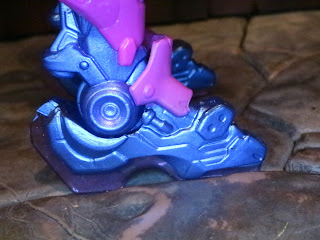 * The hard-light skates look incredibly cool. Not only do that have a great sculpt but they have translucent purple blades. How cool! 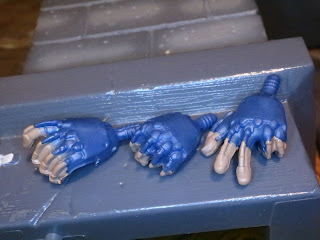 * Lucio has three alternate left hands that can be swapped around. One is a standard pistol grip, one is a fist, and one is a more expressive pose with the thumb, index, and middle fingers extended. They swap easily and give you a few more options for displaying Lucio on your shelf. 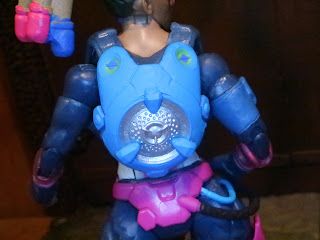 * Lucio has a cool backpack which I assume is supposed to be an amplifier of some sort. It is removable (it comes already on the figure in the package) and it looks very, very cool. I love the sleek, futuristic look of it. 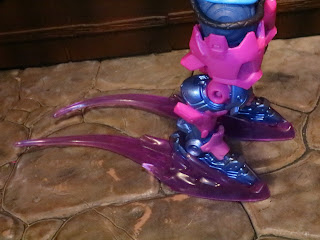 *  One of my favorite things about the figure are the hard-light trails that can attach to Lucio's hard-light skates. The trails are translucent purple and they look very cool, helping to mimic his in-game ability. The blades fit right into the base of the figure and serve as sort of a base for the figure, too. I love the energy and weapon effects that all of the figures thus far have included. I really hope Hasbro continues with these! 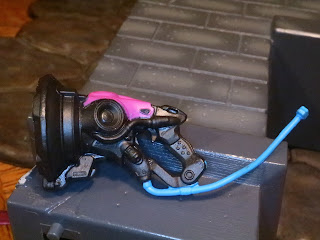 * Last, and certainly not least, Lucio comes with his Sonic Amplifier, which can be used as his offensive weapon. The Sonic Amplifier has a very cool sculpt and apparently can be used to direct sonic based projectiles as his enemies. It fits nicely in his hand and the cord attaches to a cuff on his right bicep. 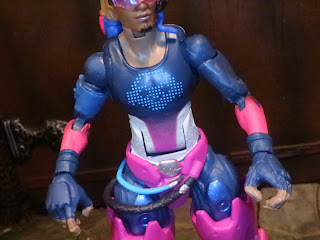 * I'm cool with the colors of Lucio's outfit, but I'm not liking that Hasbro just repainted him to look like he has sleeves on. You can still see the sculpted tank top, plus just painting his arms makes him look odd. 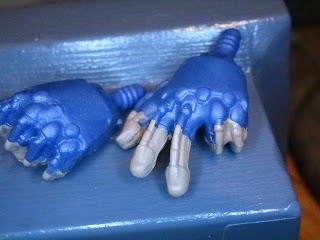 * I noticed his fingers while taking some pictures... What is going on with these? I imagine he's got some sort of fingertip devices with wires attaching to his gloves, but the details aren't painted here and these look really, really strange. 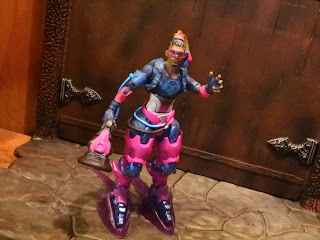 Lucio is still a Great figure, but I just don't like him as well as the basic figure. Some of the alternate skins are very, very cool, but this one's a bit of a dud. He's a GameStop exclusive as well, so you'll have to pay a little bit more, though they did have a killer sale last week with 40% off the Overwatch Ultimates figures. Dang! I wish I didn't already own everything released as that was one heck of a deal. Who are you hoping to see in an upcoming series? Let me know! I love chatting about these figures!

If you're a fan of Lucio I've also reviewed the standard Overwatch Ultimates Lucio from Hasbro.