Action Figure Review: Skeletor from Masters of the Universe by Mondo 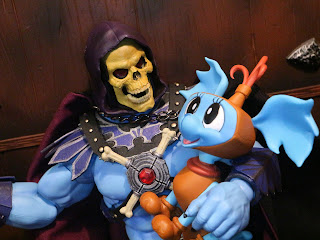 Skeletor is evil. He's a seriously evil being intent on taking over Eternia and, later, the entire galaxy. He's attempted to kill members of his own family, razed helpless villages to the ground, and even eradicated his own henchmen. But Skeletor was no match for two things... The Christmas Spirit and the love of a puppy named Relay! Guess what? I'm back with another review from Mondo's excellent line of Masters of the Universe 1/6th scale action figures and today I'm checking out the Evil Lord of Destruction, Skeletor! Skeletor has been making his way out over the past couple of months and I'm finally getting the chance to review mine! He's already found a play of honor in my MOTU collection next to the Sideshow statues of He-Man and She-Ra and the Mondo He-Man and he's even had a few battles against my daughter's new She-Ra dolls (he lost, by the way). Today, though, Skeletor is getting the full review treatment here at Action Figure Barbecue and I'm going to preempt this review by going ahead and stating that Skeletor is easily one of the best MOTU toys I've ever owned. Let me tell you, folks, I own a lot of MOTU toys, too. That's high praise! I love how Mondo manages to capture so many different facets of the MOTU brand and meld them all into one killer toy. Let's check out Skeletor after the break and see what all the fuss is about! 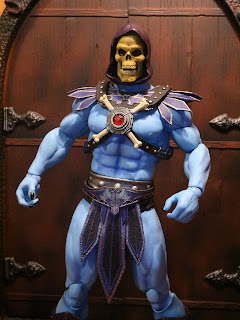 * Skeletor uses the same base body as He-Man, but that's nothing new for Masters of the Universe, is it? It's the colors and the armored bits that differentiate him and, boy oh boy, Skeletor looks fantastic. Seriously, he is one massive, chunky looking Evil Warrior! I love the extreme build on these guys and how well the armor blends together with the sculpt. There's some nice shading to the muscles here and the armor has a very realistic look to it. Like with He-Man, Skeletor looks like the design for a near perfect MOTU movie costume. As if a move design could look this good, right? 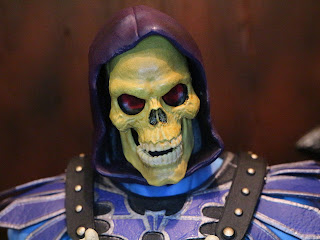 * The headsculpt is excellent. Skeletor's look doesn't change that often and this is a perfect blend of the classic look with a bit of a creepier, more realistic edge. I love the level of detail on the bone here and on the teeth. This is easily one of the best depictions of Skeletor in toy form I've ever seen. He looks so downright menacing! 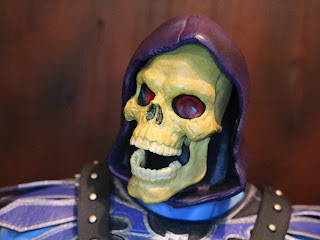 * Skeletor has something I don't know that I've ever seen on a toy before: An articulated face. Yeah, the hood is actually the main "head" for the figure while the face is attached via a balljoint onto the interior of the hood. This allows Skeletor's skull visage to move around. He also has an articulated jaw. Yup, this is A+ work right here. 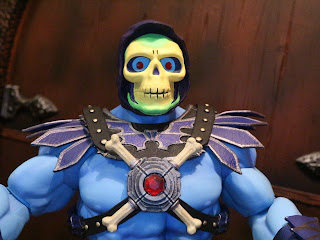 * Mondo has given both He-Man and Skeletor a vintage styled head as well and while I wasn't a fan of the look of He-Man's on the body, I actually think Skeletor's works a bit more. Maybe it's because it's a "non-human" headsculpt, but Skeletor's vintage styled portrait just looks better on this modern, updated body than the He-Man head did on his body. It's still a novelty piece, but it's a fun one. 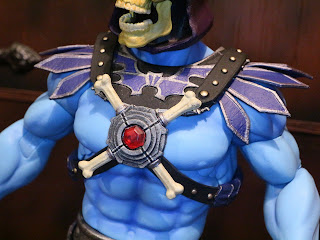 * Skeletor's armor is incredible. I love how many different paint applications it has, especially the red jewel in the center. It captures the best elements from so many different iterations of the classic Skeletor design but then ramps them up to the level you'd expect from some epic fantasy art. 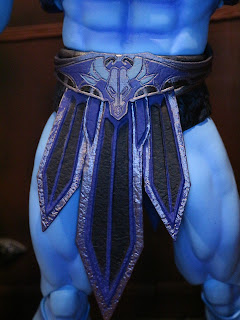 * Skeltor also has his Roman styled loincloth. Not only is there a very cool texture to this but there's also a rather intricately sculpted ram design on the belt. 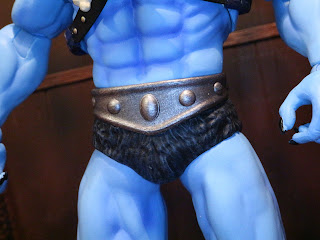 * Like with He-Man, underneath is the traditional fur briefs with the classic metal belt. I like the armor better on this figure and it's vintage accurate, but it's cool that they went with the vintage design underneath the traditional loincloth. Skeletor splits apart easily at the waist (it's a simple peg) and you can remove the armored loincloth or put it back on. 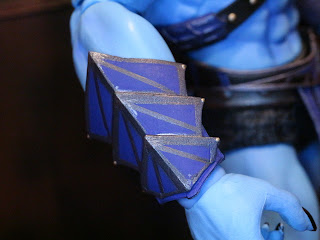 * Skeletor's armored bracers look like overlapping plates of metal. Evil metal, to be specific. They have a nice, battle worn appearance and can be easily removed. Just pop his wrist pegs out of the socket. 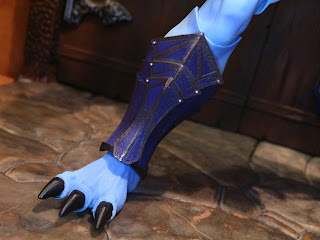 * Rather than boots, Skeletor has clawed bare feet and armored greaves that match his bracers. 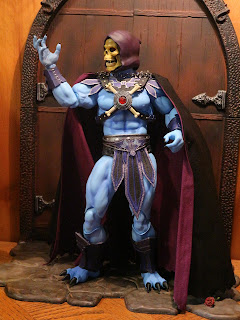 * To complete his look, Skeletor comes with an amazingly well tailored fabric cape. It's double sided, so he can have a purple cape with black lining or a black cape with purple lining, and it has an actual metal chain that slips over his head. This is a really stunning piece and it definitely changes the overall look of the figure. It makes him seem more regal, like the Frank Langella film version of Skeletor. 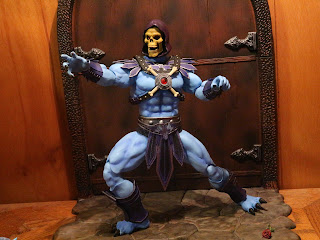 * Mondo's MOTU figures do not feel like your traditional 1/6th scale figure but more like oversized Masters of the Universe Classics figure. Skeletor is really heavy, but also very durable. I love how sturdy this guy feels. The more I handled him, the less I felt like there was the potential for breaking him. Mondo definitely has done a great job with the quality here which should inspire confidence in buyers. The articulation isn't bad, either, and Skeletor is extremely fun to pose. The joints stay together great but, if you push them to far, they do pop out rather than break. Customizers could have some fun with these, no doubt. 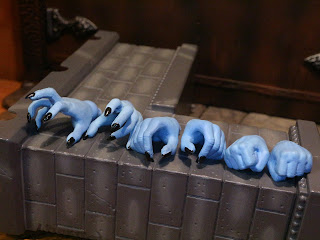 * Skeletor's hands swap out rather easily (they have really thick wrist pegs so no worries about breakage) and stay in place better than He-Man's. You can swap out between three pairs: Gesturing/ spell casting hands, traditional fists, and standard grips. The hands are actually fairly rubbery, too, making putting weapons in them so much easier. 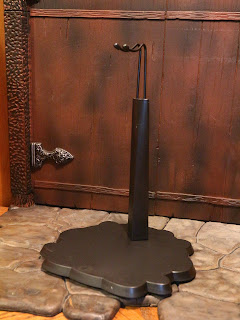 * While you probably don't "need" it, Skeletor does come with a black plastic display stand with a metal display stand that rests under his crotch to keep him standing. It's not the best design for a stand but it works quite well for a heavy figure like this. It's the same as He-Man's stand, so if you already have that figure you know what you're getting. 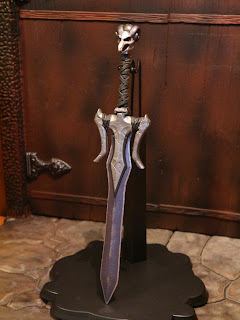 * Like the vintage toy, Skeletor comes with his own Power Sword. It's a lot more shad looking, though, and it is noticeably battle worn with darker colors. The Pommel is a ram's skull, just like the top of the Havoc Staff. The accessories in this line are gorgeous and pictures really don't do them justice. 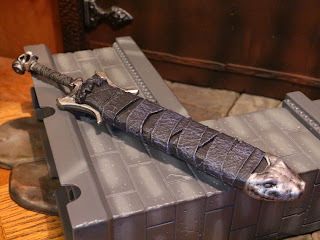 * The Power Sword easily fits inside of Skeletor's scabbard.The scabbard follows the design cues of the sword  and other elements of the figure by looking like a mixture of metal, wood, and leather. The leather straps wrapped around the scabbard have some killer paint applications while the bottom of the scabbard appears to be a metal decorative element that resembles a snake! That's a cool detail! The rear of the scabbard features two removable plastic clips that can attach the scabbard to Skeletor's harness. 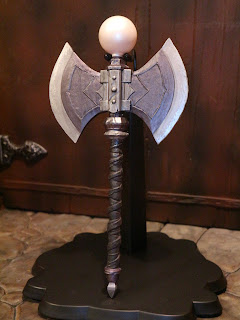 * Skeletor also includes an ax, just like He-Man. Well, not quite. While He-Man's ax has a spiked tip, Skeletor's has the Filmation styled orb on top, presumably allowing Skeletor to use it as a magic staff when his Havoc Staff isn't at hand. 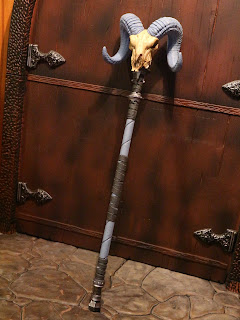 * Speaking of the Havoc Staff, here it is: It's incredible, isn't it? The Havoc Staff is easily one of the most impressive accessories I've seen this year. It is insanely heavy, too! 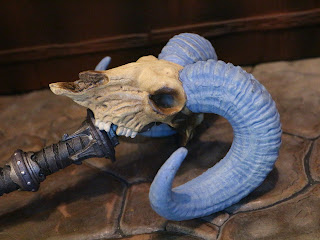 * Take a close look at the ram's skull on top of the staff. Creepy! The sculpt is so intricate that this is almost like the equivalent of another portrait included with the figure. * Skeletor's last accessory is the bone sword he uses in the Filmation series. Of course, it's been really amped up here and now it looks less like a costume store prop and more like something crazy Nicholas Cage might purchase to store in one of his castles. 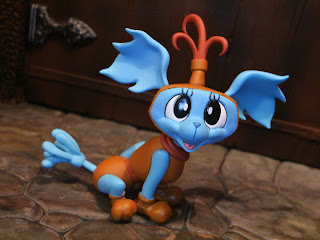 * Skeletor is already a very, very excellent figure, but Mondo went out of their way to make him even better: They included Relay! Relay is a Manchine puppy from the He-Man and She-Ra Christmas Special and, it turns out, he's a secret weapon who is able to melt Skeletor's heart. The sculpt is incredible and really captures the Filmation style. Yeah, it clashes with the hyper epic fantasy look of the Skeletor figure itself, but does anyone care? It's Relay! You can display him with Skeletor or, even better, put him with your MOTUC/ Club Grayskull figures, since he was never released in those lines. 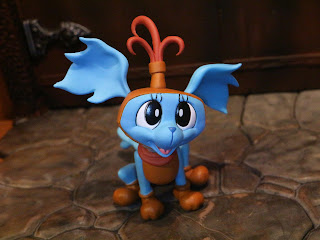 * Relay has a balljointed head and an incredible headsculpt. Isn't he adorable? 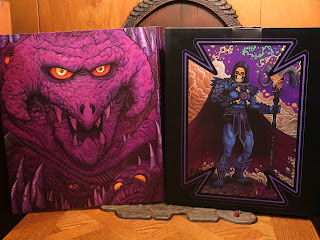 *  The box is not only collector friendly but it is also insanely gorgeous. The interior box is a five panel box with magnetic closure and has a gorgeous print of Skeletor on it. The plastic trays to hold the figure and accessories slide out easily. My favorite part, though is that the slip cover looks like the one of the faces on Snake Mountain. This box is definitely worth displaying as well. 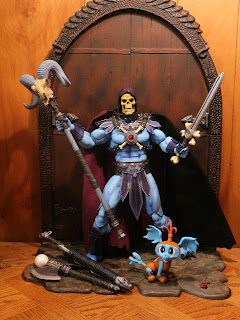 Skeletor is an even better figure than He-Man, who was already an Epic figure. Mondo is producing some seriously high quality toys here, and I'm glad that Mattel seems to be allowing them to continue. Yeah, they're pricey, but darn do they feel worth it. I've never been a big fan of 1/6th scale toys, but these are absolutely an exception. They really do feel more like larger action figures rather than traditional 1/6th scale doll-like figures. This might be the best Skeletor figure ever released. While he doesn't have the same level of Nostalgia as an actual vintage MOTU toy, Mondo has done everything possible to still tap into the same well of nostalgia while making one of the coolest action figures of all time. Plus, we get Relay! I love how MOTU can be this violent, barren swords and sorcery property and at the same time it can exists along the good natured, loveable, and goofy Filmation approach to the property. Skeletor captures all of these qualities oh so well!

This is the first figure of Relay I've reviewed!

For more Mondo Masters of the Universe reviews, check out the following:
He-Man
Posted by Barbecue17 at 9/08/2019