Action Figure Review: Skeletor (Midnight) from Masters of the Universe ReAction by Super7 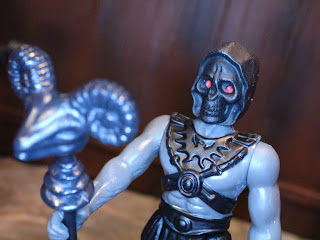 Earlier this week I reviewed the Cartoon Colors Orko, one of the figure the Castle Grayskull series of blind boxed Masters of the Universe series of ReAction figures and today I'm checking out a villain from the Snake Mountain: Midnight Skeletor! Like the heroic series the villainous series includes four characters (Skeletor, Trap Jaw, Merman, and Beast Man) each in two different variants. While the main figures (with a 2/12 rarity) come in their classic cartoon colors, the variants with a 1/2 rarity are a bit more unusual. This version of Skeletor is referred to as the Midnight variant and I gotta admit that he looks really, really cool. While Skeletor typically looks the same, he's a character who looks fantastic in alternate color schemes. This grey and black Skeletor with red eyes is absolutely striking. While he's just a simple repaint of the standard Skeletor, he's just too cool for school. Let's check him out after the break... 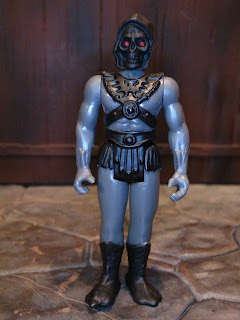 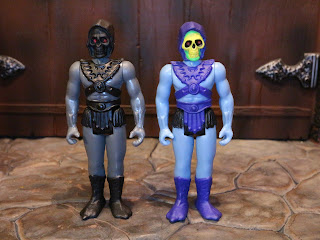 * On the left is the Skeletor (Midnight) variant while the standard Skeletor is on the right. As you can tell, these are simple paint variants, as is the Los Amos Skeletor I've reviewed previously, too. 
* If you want the full scoop on the sculpt, check out my review of the Los Amos Skeletor. It was the first version of this sculpt I reviewed, so I went the most in depth with it. This guy's just a repaint but he's a darn fine repaint for sure. That black and grey is just killer. I loved how the 200x line gave Skeletor some legitimately different color schemes so it's fun to see that continued here. 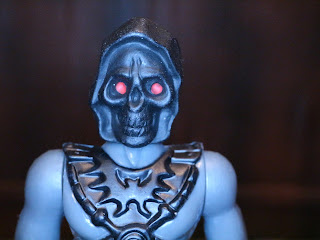 * This guy looks so, so creepy and cool with those red eyes. I love it! Again, it's simple but it is so darn effective. I love the evil look of Skeletor here! 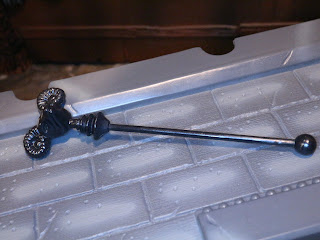 * Skeletor comes with the same Havoc Staff that the previous figures of the character have included but this time it's cast in all black, just like a Spinal Tap album cover. 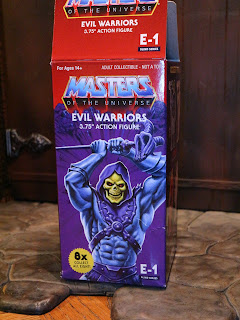 *  I really, really don't like the whole trend towards releasing blind bagged/ blind boxed items. Can someone explain to me the appeal of blind boxing  a $10 dollar item like this targeted towards collectors? Why can't I just buy all of the figures individually, as I very well might if I could buy them like nearly every other figure released. 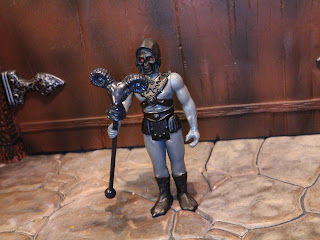 Midnight Skeletor might be a pain to find since he's a 1 per case of 12 variant in a blind boxed line but he is still very, very cool. I seriously love the look of this guy. A really good repaint can definitely change how you perceive a sculpt and this here is a very good repaint. It's definitely more of an art-piece than a standard character variant, but who cares, right? Heck, I'd be ok with this guy's color scheme on a MOTUC figure. That would be incredible. Midnight Skeletor is a Great variant and, while he's not as funky as Disco Skeletor, he's definitely a much more fierce looking variant.