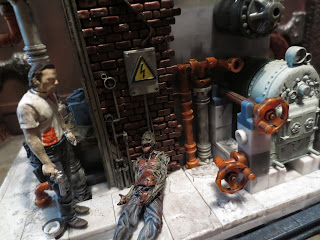 Today as part of 31 Days of Toy Terror Lives is a look at one of the The Walking Dead building sets from McFarlane Toys. Other than a few of these sets I picked up on clearance, I'm pretty confident it has been well over a decade since I purchased anything from McFarlane Toys. While those guys used to run the show when it came to action figures, they've really failed to produce anything of interest to me. I was pumped about their Walking Dead stuff when first announced but the odd scale kind of turned me off. They're making some great looking figures in their various ranges, though, but again, the scale. These are cool though because they're essentially lower-priced model kits that look fantastic on display. I've always loved dioramas! This set comes from the third season of The Walking Dead and represents Rick in the boiler room where....some very spoilerish things happened. Let's just say that since some of you maybe haven't watched that far yet, right? It's OK: I haven't watched beyond season 3 yet, either (I'm going to pick back up at some point). How about we take a closer look at this set to give ourselves a few chills on what is hopefully a fantastic October day... 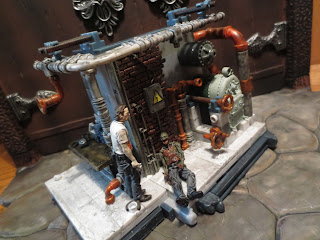 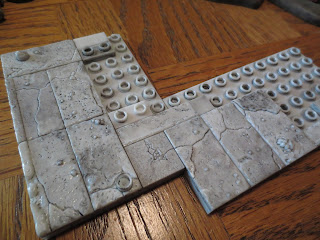 * I'm showing this set off in steps (typically I took a picture every 5 steps or so) to give you an idea of what the set looks like throughout. Here's the base being covered with tiles that have some excellent cracking and damage painted on them. They're all unique and you can pretty much arrange them however you want. I have to admit that I do like the building aspect of these even though they're not really sets you can use to build other things. These are more like model kits designed for a specific purpose. 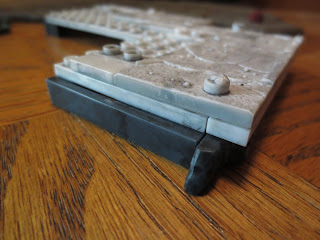 * The main base actually has some posts added underneath that raises it off the ground. From this angle you can really see how the marbled plastic of the various bricks really gives these sets that trademark grungy McFarlane look that kind of defined their style in the late 90s and early 2000s. I still love it. You can also see some of the pegs that the included Rick Grimes figure can attach to. 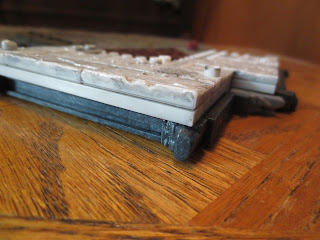 * Here's more of the base. I like that this isn't just a flat bottom but I have to say that building the bottom around this was frustrating. There were many parts, most noticeably the corner pieces of the girders, that just do not look the same as in the directions. This was the most frustrating part of the build to me. 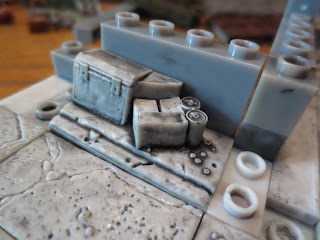 * The sculpted elements in these sets are always pretty interesting. This is some random junk that's sitting underneath the work bench. It's just a few stray boxes and canisters but it adds to the lived in and now decaying world of The Walking Dead. Some of the pieces like this are tough to attach to the studs but once you get them on they stay very tightly. 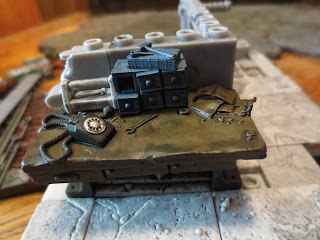 * With the top of the work bench on you can see a bunch of junk spread about: Parts bins, a small tool box, various tools and manuals, and the infamous telephone that causes Rick to question his sanity. The little blue chest of drawers and the grey toolbox are separate pieces plugged into the top but everything else is one solid, well painted piece. 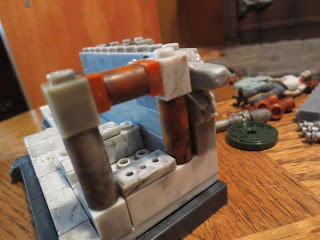 * The sides of the boiler housing and pipes are created using a variety of multicolored bricks. Those little 1x2 tiles with the three hols are interesting, huh? They don't really serve any purpose other than to look cool so I wonder what they're for? 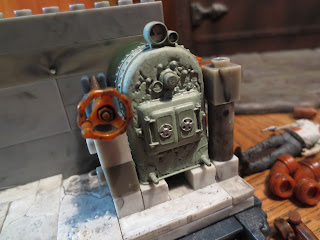 * Here you can see the boiler being built. Again, these sets have an unusual mixture of legit "brick built" sections and molded, sculpted accoutrements that simply connect to the studs. The boiler is a very strong sculpt and I love the valve next to it (the vale actually turns, by the way). 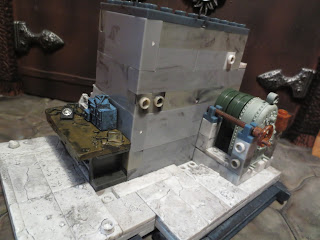 * Here you can see that the walls are coming up. The way the set is built on the sides of a corner is unusual but there is a fair amount to stand a figure or two. 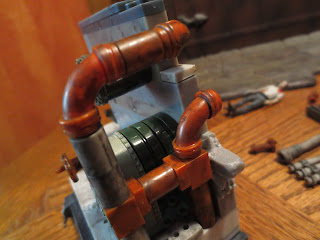 * Here you can see some of the pipes that connect off to the right side of the boiler unit. One thing I do really like about these sets is the marbled colors used in the various pieces. The various shades of copper mixed with black gives these pipes and old, rust eaten appearance that adds another layer of depth to the sets. 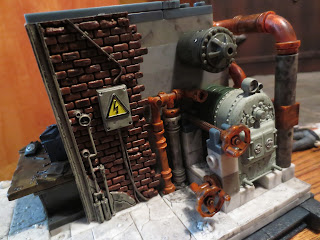 *Here's the boiler with the giant wall piece attached and plenty more pipes and tubes. This thing looks really slick and I love the level of detail. While Lego sets relish in the blocky, geometric style of the bricks themselves, McFarlane's sets want you to forget they are brick built sets. You basically build a base then place non brick-like pieces over them. Different philosophy and somewhat strange, but I love the look when they're completed. 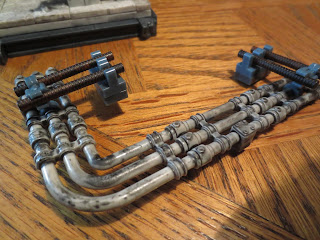 * Working on the pipes that hang above the boiler room isn't nearly as difficult as it looks. Sometimes working on pieces like this reminds me more of assembling a mid 1980s G.I. Joe vehicle rather than a Lego styled set. The sculpt is great on these and it's a well thought out addition to the boiler room. 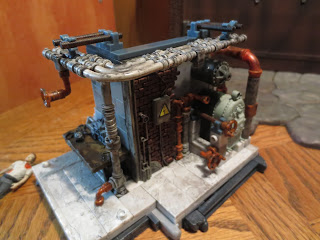 * And here the completed set! It's an interesting diorama like piece and, as I've already mentioned, I'm all about any kind of toy that has a diorama like quality to it. They remind me of my beloved McFarlane Monsters playsets in some way and that's a huge plus. 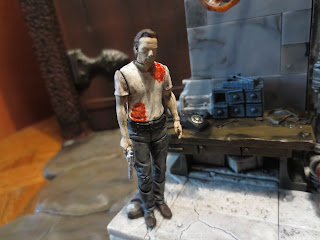 * And here's the first figure from this set: Rick Grimes. Rick is wearing some bloody clothes and has a decent sculpt with above average paintwork for this scale. He also has some articulation. The figure comes in 7 parts that snap together with the joints serving as articulation points of a sort. You can't do much but you can turn Rick's head or move his arms so he's pointing his revolver at one of the walkers. Speaking of which... 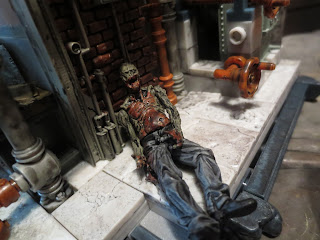 * Here's the nasty gorged walker. He's built from five separate pieces and can move at the head and shoulders. That's about it, though: While he's nasty and creepy looking, he's really just designed to sit around with his back up against the wall. The arms can be tough to attach so be careful trying to put them in! 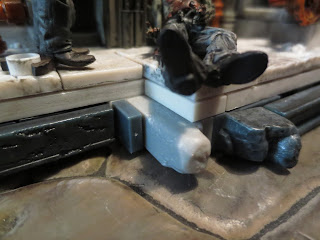 * While I really like the color variations on the bricks, sometimes it makes building these frustrating because you don't know what to look for. In this pic you can see a grey uneven brick next to the blueish base. The brick looked blue in the instructions and I honestly thought it was missing until I finished the set and saw this gray brick that seemed to match. Frustrating! 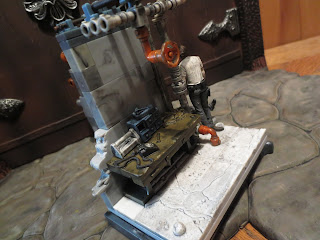 * I'm not sure how much of a negative I consider this but I do find it odd that the set was built at an angle like this. It seems to look fairly accurate to the show but it still seems odd for a display piece like this. Why not design this as a more traditional square room? 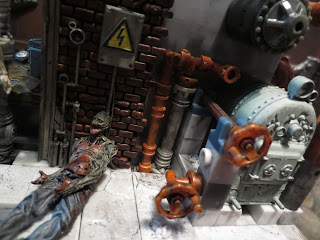 My views on this set might be slightly skewed because I only paid $5 dollars for this at a Wal-Greens. I'm not sure how popular these sets really are nor if they're going to continue. For fans of horror dioramas, though, these are really, really cool. For the price I paid I think this is really a Great set. My only real frustration is that the instructions and the colors of the pieces don't always match up, leading to some real frustration. Get this set together, though, and you're in for a real treat. It looks great and brings me back to the days when McFarlane Toys was a big deal. These days they're too busy pissing off their fans with awkward and ill-conceived scale changes and reluctance to articulation.

I reviewed two more of these sets last Halloween during 31 Days of Toy Terror Returns: Daryl with Chopper and The Governor's Room.

Keep checking back here every day in October for more Toy Terror! Also, make sure to check out the Toy Bloggers United contest being hosted here this month! For more 31 Days of Toy Terror, check out my Hokey Halloween Horror page for spooky fun from 2016 and years past!
Posted by Barbecue17 at 10/03/2016