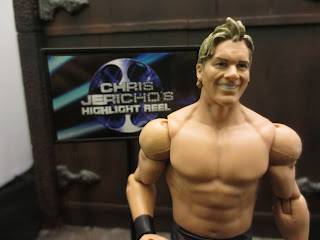 Early last week I had to go to the dentist, which really sucked, but I did end up having some time early in the morning to run around and hit up some stores in a nearby town and boy did I have one heck of a toy run. The first thing I picked up while out and about is a figure from a recent Wal-Mart exclusive series from Mattel's WWE line called "Then, Now, Forever" (I actually picked up the DC Multiverse Aquaman that same day, but it was after I snagged Jericho). These are essentially "basic" WWE figures but they've turned out pretty nice. Plus, it's been a few years since there was a modern, Elite Chris Jericho and since he's been a pretty big presence over the last few months I decided to grab him. Plus, I'm totally digging the Highlight Reel accessory as it's been a major plot point again over the past few weeks during his feud with Dean Ambrose. Maybe we'll get a jacketed Dean Ambrose next year with an "Ambrose Asylum" sign and a Mitch accessory! How cool would that be? Anyways, let's take a look at this new figure of Chris Jericho shall we? Join me after the break ("the walls down")! 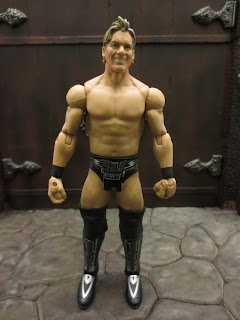 Accessories: Jeritron screen and base. 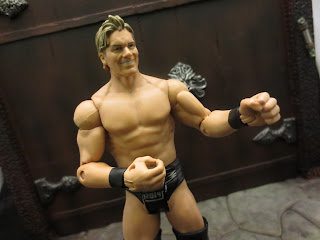 * This is a "Basic" figure, which means it features neither a mid-torso hinge nor ball jointed hips. Still, for a figure that I purchased for right around $10, there's a lot of quality articulation here. I really love the quality, the feel of the plastic, the sturdiness of the joints, and just the overall production of Mattel's WWE figures. I really wish they'd build their DC figures in the style of their WWE figures. 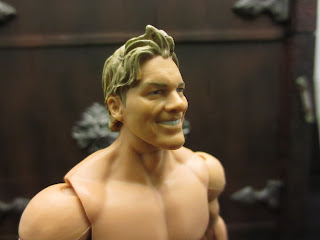 * This is an incredible headsculpt. I'm not sure if Mattel has used it before but it looks just like Y2J. The Bon Jovi styled hair, the arrogant smile; Mattel really nailed it. I imagine any wrestling fan could pick this figure up and know exactly who this is. It's the Man of 1,004 Holds! 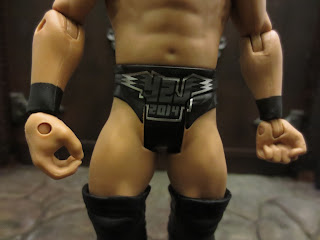 * I don't know if these trunks are specific to a certain event or period (a quick bit of Google-fu shows Jericho wearing this at Night of Champions 2014) but they look good. The black and silver look great and the print on the front and back is neat and clean. I wonder if some of the kids watching wrestling today even know what Y2K even was? 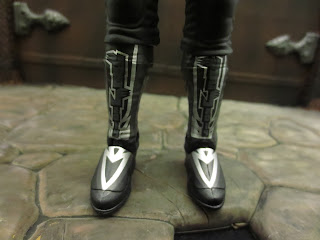 * Christ Jericho's boots also look pretty sweet. They're black and silver and say "Y2J2014" on them. That's pretty cool, right? If you found one of these boots, you would be able to easily track down the owner. 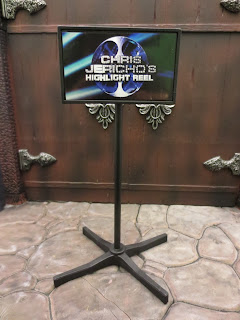 * The Jeritron accessory is a really cool, fun accessory. It's nothing too fancy, just a plastic TV on a stand, but it's nicely done. The screen is a sticker and the pole that holds the Jeritron rotates at the base. It comes in two pieces in the package and connects together pretty easily. It definitely seems like one of those "one time assembly" pieces, though, so don't try to take it apart unless you want to damage the integrity of the plastic. 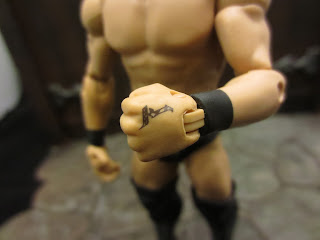 * Chris does have the "F" tattoo which represents his band, Fozzy, but that's it: He's actually missing a number of tattoos on his left arm (and his wife's name at the bottom of his left ring finger). Usually Mattel does an awesome job ensuring that even the basic figures have accurate tattoos but here they seem to have dropped the ball a bit. 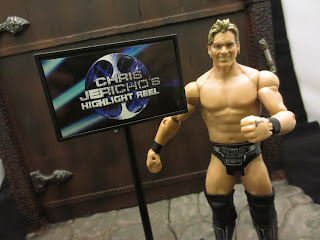 While I mainly collect Elite figures, I'm always willing to pick up a solid Basic figure to add to the collection and Chris Jericho is indeed a solid Basic to add to the roster. While his missing tattoos seem like a pretty big oversight on Mattel's part, the excellent sculpt and the fun Highlight Reel screen accessory really make this guy standout. Heck, I think this screen is a better accessory than some Elite figures have received recently. He's a Great and a 1/2 Basic figure and if you find yourself in a Wal-Mart, you should hunt this guy down.


I haven't reviewed any other Chris Jericho figures on here yet but I have reviewed plenty of other WWE figures from Mattel: