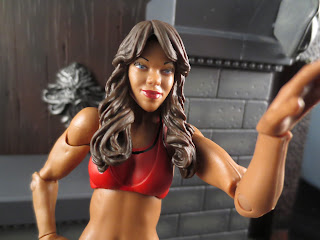 Alicia Fox has been with WWE since 2008 and this former Divas champion has had a few figures based on her likeness during her time with the company. Within the past year she joined in the Diva's Revolution as part of Team Bella and participated alongside Nikki and Bella. Things have been pretty quiet for Alicia Fox lately (honestly while the women's division has some incredible talent right now they have a tough time ever finding stuff to do for more than a handful of performers) but I found this figure on Amazon for retail price and decided to jump add to her to me display alongside Nikki and Brie to recreate Team Bella. She's currently part of team Total Divas and has had a handful of matches here and there. Of course, pick up this figure and you can put her in whatever matches you want? Ready for a closer look at Alicia Fox? Then join me after the break... 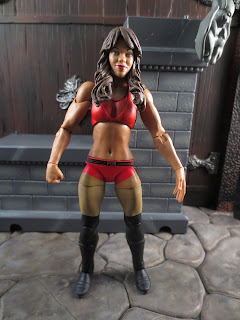 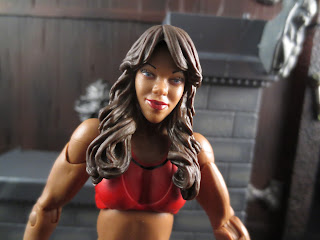 * Say, this is a pretty good likeness of Alicia Fox! It looks a bit caricatured to me, but I think that's true of a number of Mattel's WWE figures. The face manages to capture a number of Alicia's unique features such as her chin, her defined cheekbones, and her hairstyle. It's pretty nice, overall. 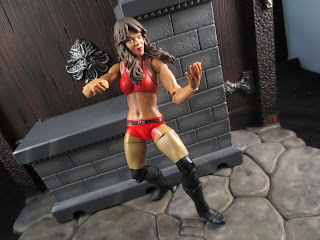 *One of the great things about the female figures in Mattel's WWE lines is that even the basic figures still have the "Elite" styled articulation. Alicia Fox is quite fun to pose and feels incredibly sturdy. It's not as refined as some current figures but it's still pretty decent. 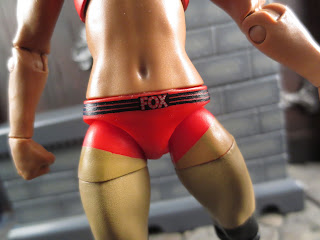 * The printing on Alicia Fox's trunks is petty sharp. I like the color of her trunks and the neatness of her name printed on them. They look really, really good. 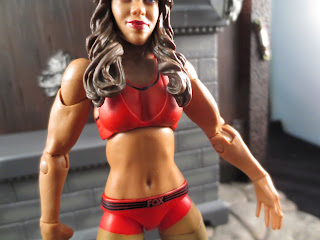 * One of the things that drives me crazy with the female figures is that Mattel seems somewhat reluctant to create new torsos for them. I mean, rather than give her an accurate top, Mattel just painted the top over a bikini style top. You can see how odd this looks from the photo! 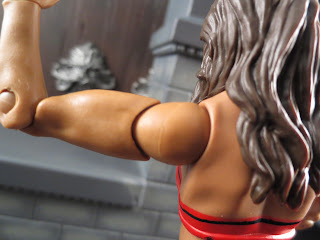 * Like many of the other female figures released in the WWE line, Alicia Fox has some really weak biceps. Fortunately some of the newer figures like Sasha Banks seem to feature better, stronger bicep swivels but Alicia Fox is from 2014 and still features the older design. 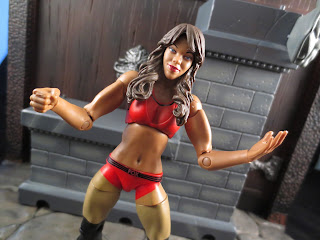 Alicia Fox is a figure I've picked up a year or two after her release so she's not as good as most of the current product but it's still not at all bad. Alicia Fox is a Good figure that delivers about everything you'd expect from a basic series Mattel Diva. The articulation is fairly solid, the likeness is swell, and there's some decent colors and printing here. Who knows if we'll ever see another Alicia Fox figure anytime soon as the women's division has been flooded with new talent, so you might still want to pick this one up if you want to add her to your roster while you can still find her for retail price.

I haven't reviewed any other figures of Alicia Fox but I have reviewed plenty of other WWE Superstars from Mattel, including: