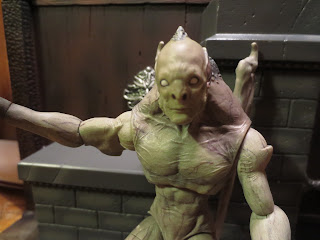 Don't you love when a movie based toyline releases a completely out of left field character who gets only a fraction of a second of screen time? You have to admit that it's interesting to see what secondary (or lower) characters make their way into a toyline and I think you'll be hard pressed this year to find an action figure based on a more obscure character in a recent movie line than the Bat Creature from Batman v. Superman. This guy was a pretty big surprise, especially considering that he's a hallucination in a brief dream/vision sequence fairly in the film. I respect Mattel for picking a fairly toyetic character although I do wish that this spot had been given to Lois Lane. Or Bruce Wayne. Or a Parademon. Alfred. Or Diana Prince. Or Anatoli Knyazev. Or Zod's corpse. Seriously, any of those characters had more screen-time than this guy. Still, that doesn't mean it's a bad figure does it? Let's take a closer look and see what we can see, after the break of course... 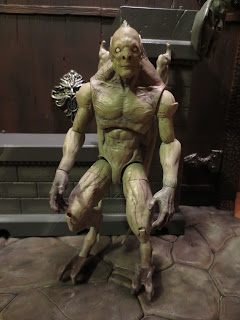 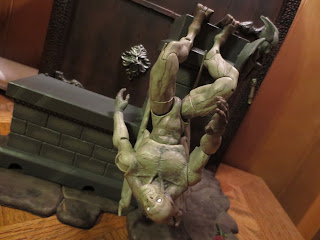 * One of the positive things about this figure is that the legs are filled with some pretty useful joints, particularly the feet. The feet are clawed in such a way as to allow the bat creature to hang around somewhere. He does look cool being displayed like this! 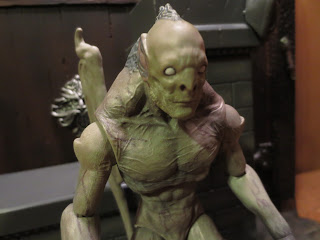 * The sculpt is pretty nice on this figure. It might be a bit soft in places but it does a good job of resembling the bat creature from the film. I'll admit that having seen the film only once so far, I'm really trying to recall what exactly occurred during this scene. I think Mattel probably should have went with a fiercer, crazier look, but all things considered this isn't bad. 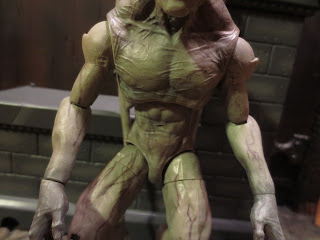 * The paint work on this guy is pretty solid with a number of smaller details and paint tricks. Honestly, he's pretty darn impressive. He's much closer to being NECA quality than your typical Mattel quality from a movie based line. Those milky white eyes are just creepy, too! Even if you're just someone who likes horror toys, this guy might be worth checking out as he reminds me of something out of Bram Stoker's Dracula. 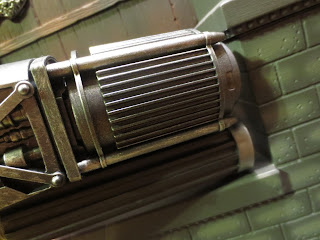 * At this point I'm only missing one piece to the Collect & Connect Grapnel Blaster (it's Wonder Woman's piece, by the way) so I went ahead and put the thing together. I'll get around to reviewing it completely once I score the final piece but in the mean time let me just say that this has turned out to be a fairly nice prop replica. It's not "movie quality" or anything but it looks good. The Bat Creature comes with the "barrel" of the Grapnel Blaster. 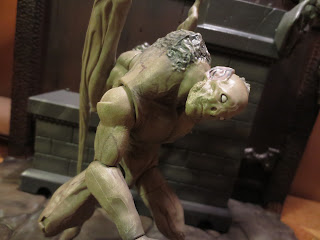 
* While there are a good number of joints here (a really good number, actually) some of them just seem really limited. I definitely think the elbows needed a wider range of motion as does the head. There's a true ball joint there but the range of motion is quite constricted. 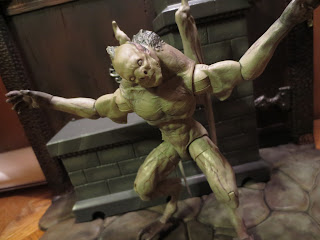 * Another downer here is that this guy feels kind of weird and hollow. He just doesn't have as sturdy of a feel as other Mattel DC figures and that kind of bothers me. I'm sure it's a cost saving measure but it really does hurt the product. 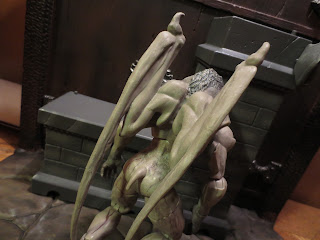 * These wings just look so....awkward. Yeah, awkward is the right word. They come unattached in the package and you simply plug them in to the two holes in the Bat Creature's back. The paint and sculpt is nice but they just don't look like bat wings to me. Maybe it's because there is no wing actually visible here? Anyways, I'm a but underwhelmed by them. 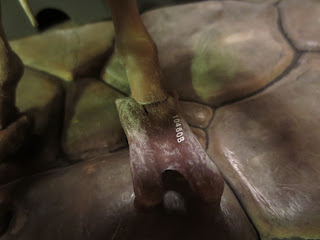 * What is this? I know Mattel prints bizarre little product numbers on some of their figures, but on the TOP of a figure's foot? Even if you pose this figure in a straight up vanilla pose where he's facing forward, this will be displayed right out in the open! That's ridiculous! 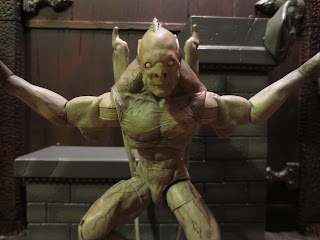 Again, while this guy doesn't necessarily make me think of "Batman" when I see him (even though he does pretty strongly resemble the creature from the film) he is kind of a cool figure. I mean, what an odd and unique surprise for this line, huh? Unfortunately, there's just a lot of really weird decisions that were made here. While the sculpt and the paint are pretty impressive, the limited range of motion, inability to stand, hollow body, and questionable wings kind of erode those high points. This guy overall is just kind of an average figure. Honestly, he gets an Eh and a 1/2 rating from me. He looks great but little problems keep rearing their head little by little. Who knows if you'll find him, though? I'm getting concerned about finding a Wonder Woman and she's one of the three main leads (Heck, Superman was tough to find, too). This guy and Lex Luthor have Phantom Wave written all over them. Good luck in tracking him down to complete the Grapnel Blaster!


The Bat Creature is a unique character (well, hallucination really) from Batman v. Superman so I haven't reviewed any other versions of this specific Bat Creature. I have reviewed figures and toys of other bat creatures such as Man-Bat in the Lego Batman: Man-Bat Attack set, the Arkham Knight Man-Bat, and the Imaginext Man-Bat.  I've reviewed some other bat creatures such as the generic bat minions that came with the Lego Monster Fighters Vampyre Castle, and Batros and Lord Dactus from Masters of the Universe Classics.

If you're looking for more reviews from Mattel's 6- inch DC Comics Multiverse line, I've got those too: