Action Figure Review: Vultak from Masters of the Universe Classics by Mattel 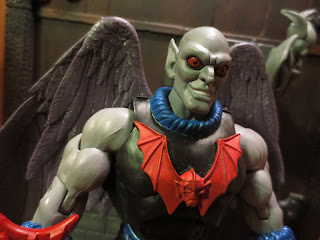 Can you believe that it's been over three months since I last reviewed a Masters of the Universe Classics figure? This has been one of my favorite lines for quite a few years now but my gosh is the new team at Mattel taking all the joy out of it. Don't get me wrong, the new Filmation inspired figures look good (I'm not collecting them, though) but the constant delays, zero contact with the collector base, and bizarre business practices have made this line far more frustrating than it ever was under the leadership of former brand manager Scott Neitlich. Fortunately, the product itself is still pretty good and I'm excited to have my hands on Vultak! I just received him in the mail a week or two ago (he's the March figure, but didn't ship until the end of April. BTW, the two May figures have been delayed until June and September.) and I'm glad to finally get a chance to review him. Ready for a look at this never before made Filmation baddie? Then join me after the break... 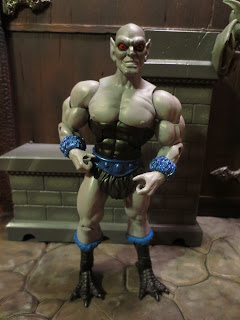 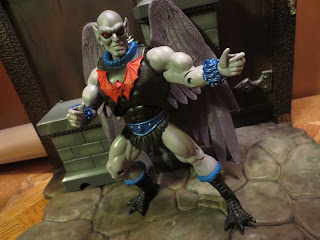 * As has been the case with MOTUC for quite a few years, these are some solid, sturdy action figures. Vultak reuses a number of parts from previous figures but that's OK as he is tons of fun to play with. All of his joints feel nice and sturdy and he has that chunky, durable quality that makes the figure feel definitively MOTUC. He'll fit in just fine with the rest of your collection! 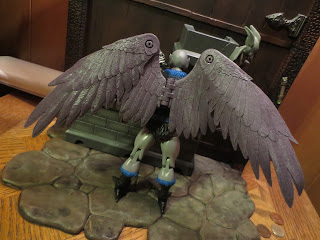 * Check out these wings! They look awesome! I love how dark and creepy they are! The sculpt is shared with Angella and is very intricate (I think they might be based on the older DCUC Hawkman wings) and really works with the figure. They also have some useful articulation as the swivels at the top allow the wings to spread out so Vultak can take flight. 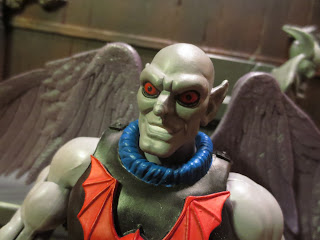 * While having a little bit of a Filmation style, Vultak manages to both blend in with the other MOTUC figures and to look really, really creepy. Seriously, this guy is odd looking. Imagine if Panthro from Thundercats became a Doctor Who villain: This is what you'd get. Those big red eyes, point ears, and massive chin just creep me out. I'm really digging this guy. 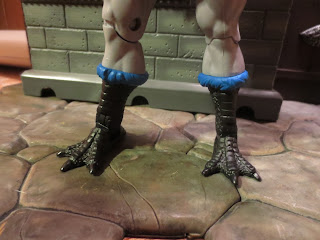 * I love Vultak's creepy bird feet. If these are a reused part I'm not recognizing them. They seem new and they manage to really fit the character while still having that classic MOTU vibe. The sculpted detail on them is quite excellent, although it is a bit odd that they have furry "boot tops" on them. What's the story there? 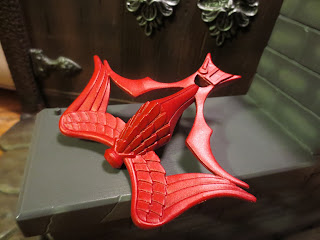 * One of the coolest things the Four Horsemen have done when crafting these figures is creating a unique crossbow for most members of the Horde. Vultak has his own unique crossbow that looks like it has wings and feathers. It's a great angry red color and looks pretty incredible. 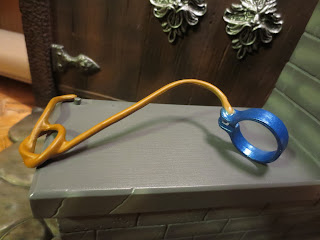 * Vultak's second accessory is a leash. In the Filmation series he captured Kowl with this item in order to fill some sort of evil menagerie for the Horde (the Horde didn't always have the best plans, to be honest). The rope is kind of under-detailed but the collar is great. It has a metallic paint job and actually opens so you can have Vultak capture anyone you want! 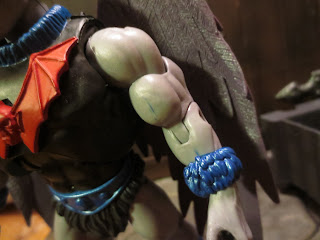 
* The only problem I have with this figure is that there are some errant metallic blue paint slop up and down his left arm. What happened here? 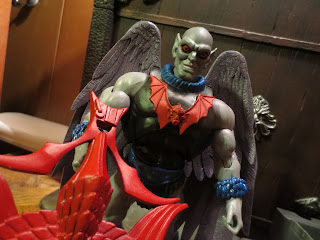 It's been a few months since I received a new MOTUC figure and while it's been frustrating collecting this line lately, the quality of the product is still pretty high. While the character selection is definitely beyond the A, B, and possibly even C-list figures, I still find that a variety of random warriors just works really well with MOTUC. Vultak is an excellent figure who fits in perfectly with the rest of the Horde, so what is there not to like? He's a Great and a 1/2 MOTUC figure, particularly due to his massive wings and two sweet accessories.


This is the first Vultak figure ever released! If you're interested in more Masters of the Universe Classics reviews, I've got you covered: