More May the Fourth Be With You Madness! 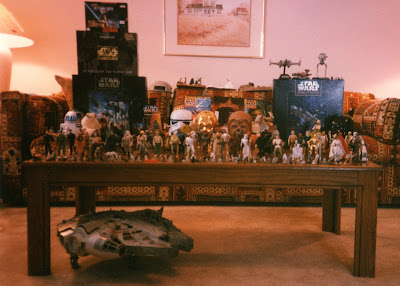 Here's another picture of my Star Wars collection I took at some point. This is another one from early 1996. If you have an eagle eye (like me) you can see that the figures shown only go up to the second series of Power of the Force II figures as the TIE Fighter Pilot, Yoda, Han Solo in Hoth Gear, and Dagobah Training Fatigues Luke are absent. There are also some more vintage figures that I acquired at a local flea market, a BP Station that sold collectible figures, and through an online retailer (the first time I ever discovered you could order toys online or through the mail!).

Take notice of the couch in the background, too! This couch was the "family room" couch for many years when I was growing up and it is incredible! Later it got moved into my room (well, the love seat did- I can't remember where the couch was stores for a couple of years) and then my wife and I took it to our first apartment in 2005 when we were married. It was our couch until my wife decided it needed to be replaced, so I moved it into our spare bedroom. When that became my little one's nursery in 2013 it moved down into our new spare bedroom. It's still there and to this day it strikes me as a comfortable, beautiful piece of furniture.