Action Figure Review: Angella from Masters of the Universe Classics by Mattel 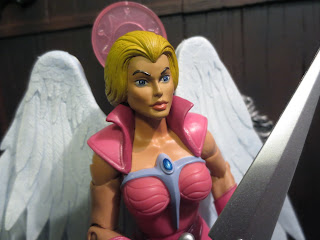 Masters of the Universe Classics is still trucking along and I love this line as much as I ever did! What's amazing is that now we're completing factions and vintage release years with almost every release. Today I'm looking at the April 2015 Club Eternia release: Angella! Angella is the queen of Brightmoon, a leader in the Great Rebellion, and Etheria's resident hot mom. She's also the last figure from the first series of Princess of Power figures to be released in MOTUC so her inclusion here means another year of figures has been completed. Congratulations POP Class of 1985! 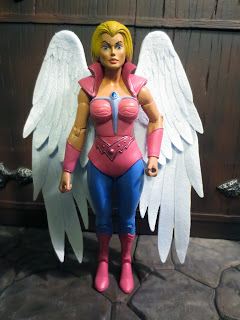 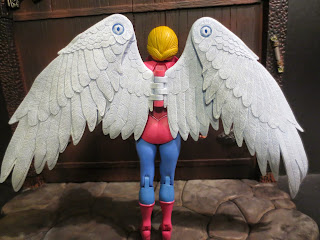 *Let me address the first thing: Angella's wings are awesome! It seems that Mattel has repurposed the wings from the DC Universe Classics Hawkgirl and they look as awesome here on Angella as they did on the original figure. Maybe even better! They're very nicely articulated, have some excellent feather texture work, and are even given a subtle blue wash that brings out the little details. They're just gorgeous and quite regal! 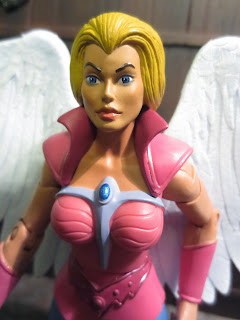 *Here's the second thing worth addressing: Queen Angella has a very beautiful head-sculpt with some nice paint work. Some Angella's have shown up with wonky eyes but mine looks just fine. I love her tasteful hairdo and her very composed facial expression. She looks like the kind of person who can keep her cool no matter what the situation is! 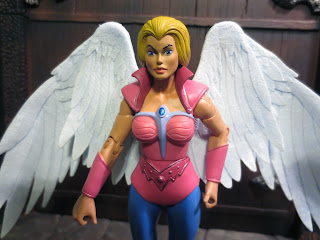 *Angella has a great outfit. It's simple and trendy. I mean, it is totally 80's, but it still looks good. There are some great details that really help it to look unique such as the details on the bodice and the belt. The colors really just pop and look great with the massive wings. 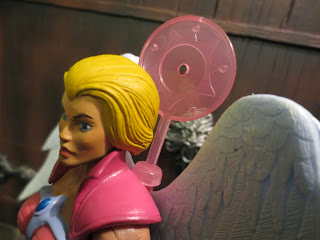 *As a throwback to her vintage toy look Angella comes with a detachable halo. It's molded in a translucent pink plastic and looks really nice. It's definitely more fitting with the aesthetic of the vintage toyline than with the She-Ra Filmation series but it's a cool extra. I kind of like it and will use it as some sort of protective spell that Angella uses. It fits easily over the top of the hinge joint that holds the wings. 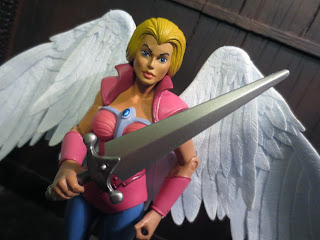 *Angella also comes with a sword! In fact, it's actually a sword from The Secret of the Sword movie. It's a basic looking sword with a nice paint app that gives Angella a tougher edge. I'm always up for more sharp, pointy things. 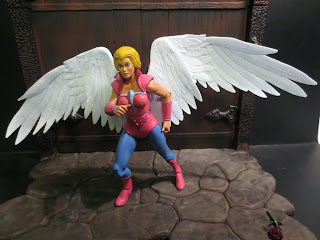 *So...Angella is a bit short. Typically that wouldn't be a huge deal since MOTUC has been pretty consistent with heights and a little variety would be nice but she's shorter than Glimmer. Noticeably shorter. Glimmer is Angella's daughter and all throughout the Filmation cartoon was portrayed as being shorter than her mother. Honestly, Glimmer should have been shorter. In and of itself the height difference doesn't bother me but, when mixed with expectations, it's a bit odd. 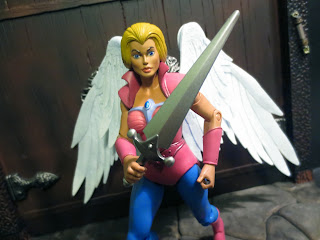 *Angella is also missing her boot swivels. This has been a recurring trend on some of the more recent female figures and it isn't a welcome one. It seems like with the unique boots Mattel would rather make one "lower leg" piece rather than a boot and an upper shin swivel piece. The ankles are also the older ankles without as much lateral motion as some of the better figures that actually have full lateral hinges. 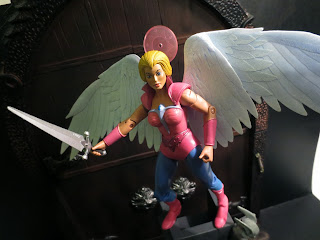 While Angella is a bit too short and is missing the boot swivels, she's still a really good figure. I mean really good. She has an awesome look to her that feels very unique and fresh. The wings look awesome and her accessories are both winners, too! Angella has been on my top 25 most wanted figures list since January of 2012 and it's great to finally have her. If you got an Angella with a poorly painted face I'm sure your love for this figure will definitely be a bit cooler than mine is but, as mine is pretty perfect, I'm happily giving Angella a Great rating. I'm really excited to have a complete series one of the vintage Princess of Power line redone in MOTUC now! Oh, and they finally managed to give a female figure wearing a leotard a pretty decent crotch piece. Pretty cool, huh?