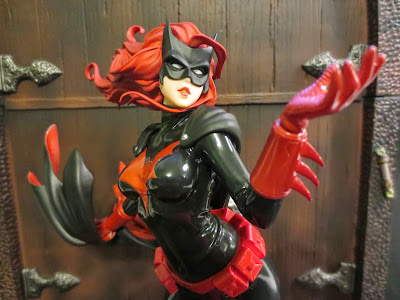 Ever since I picked up their Batgirl statue I have been a big fan of Kotobukiya's DC Comics Bishoujo series of 9 inch statues. They're colorful, durable, fairly inexpensive (so far as statues go), and feature beautiful renditions of DC's terrific cast of female characters. Other than Batgirl related items this is the most "high end" line I collect and I'm always excited for each new release. I was incredibly excited for this release of Batwoman, though. First of all there just isn't much Batwoman merchandise out there. There's only ever been one figure from DC Collectibles back in their "52" line and one from Mattel in their ill-fated 1/18th scale Infinite Heroes line. Secondly, I really like Batwoman. I read trade paperbacks rather than single issues, so I'm a bit behind, but from everything I've read from Batwoman up through volume 4 (volume 5 is sitting on my desk right now waiting to be read), Batwoman was probably the most consistently well done title in the New 52. Only Batman rivals it. Kate Kane is a truly interesting character and it's amazing to me how unique and disturbing her own personal corner of Gotham manages to be. With Batwoman (and many other titles) ending due to the aftermath of Convergence, it'll be interesting to see what happens to Batwoman. Hopefully her story will continue as she's one of the best DC characters in modern history (and yes, I know there was an older Katherine Kane, but they're clearly not the same character). Anyways, I was extremely excited to pick up this new statue of Kate Kane as Batwoman for my shelf. Ready to check her out? Then join me after the break... 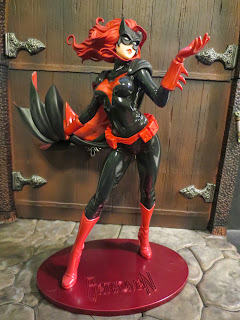 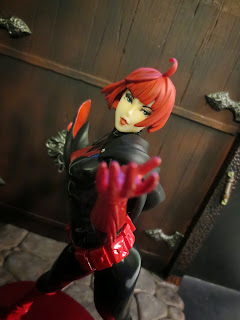 * I really love the style of these figures! I put the entire line on my best of list for 2012 and last year's Starfire made my top 10 list for 2014 as I've been a fan for quite some time. They have a beautiful design aesthetic that mixes traditional comic costumes and styling with an anime flair. These aren't overly stylized or redesigned like DC Collectibles' Ame-Comi: They're quite accurate and faithful to their source material. This is a great New 52 (and pre New 52) styled Batwoman. The more of these statues you have, the better they look! Batwoman's design here is credited to artist Shunya Yamashita. 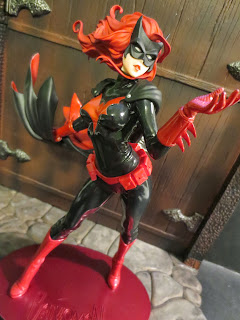 *Batwoman has a cool pose that looks great. She's definitely not in a standard action pose but she's definitely dynamic. She's showing off her flowing cape and gesturing with her left hand. I'm not 100% sure what she's doing with her hand but I like it. It's equal parts fun and menacing (and believe me, with the kind of crazy villains Batwoman fights she knows a thing or two about being menacing). The permanently attached stand keeps her standing securely; there doesn't seem to be any risk of this statue falling over. 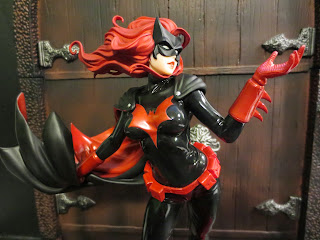 *Kotobukiya really delivers some excellent sculpts! They manage to sculpt every element of Batwoman's costume and possibly deliver the definitive Batwoman collectible released. Seriously, I don't think DC Collectibles has released a Batwoman statue that is as good as this. Kate's definitely curvy but she's also quite sleek. Her outfit looks great, particularly her boots and gloves. I love the effect of the bunched up cape, the subtle folds and wrinkles in her bodysuit, and ribbed texture of her gloves. 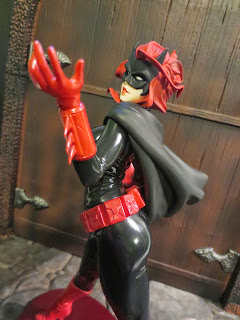 *Batwoman has an awesome costume design but it's the color scheme that really sells it. She's not the first Batman character to wear black and red but she definitely pulls it off the best. Honestly, this is one of the best superhero costume designs ever. It manages to retain the shadowy, dark appearance that a Gotham hero needs while using crimson to make a bold statement. I love how shiny Kate's bodysuit it and how the red of the costume almost has a metallic sheen to it. This really looks like a pleather or latex material rather than plastic. There's also no stray paint or slop that I can detect. Amazing! 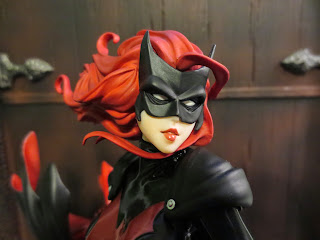 *The Batwoman headsculpt is beautiful. One of Batwoman's signature elements is her long flowing red hair (which is different from Kate's short hairstyle) and it looks great here rendered in plastic. There are multiple defined strands flowing about and the hair has a nice subtle dark wash. The mask also looks great, particularly the eyes. They're extremely well done. 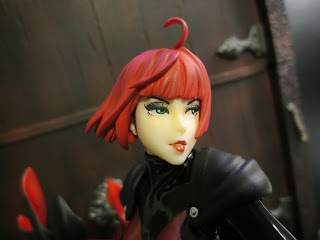 *Most statues don't have accessories but this one does! It actually includes a second Kate Kane portrait! The heads swap easily, allowing us to have Kate on display rather than Batwoman. Kate is gorgeous and her dark red lips, stylish bob, green eyes, and alabaster skin make her instantly recognizable. I'm not sure what led Kotobukiya to decide to include this secondary portrait but I'm glad they did! 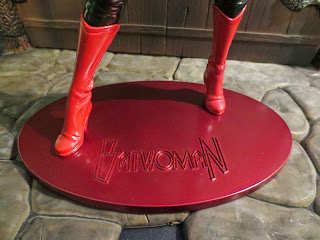 *Kate's base is a little plain. Some figures have had very detailed bases (Poison Ivy, Batgirl, Wonder Woman, and Starfire come to mind) while others have been a bit plainer. Kate's in the middle, as her stand is in a beautiful metallic red with the name "Batwoman" as a relief on top, so it isn't too bad. 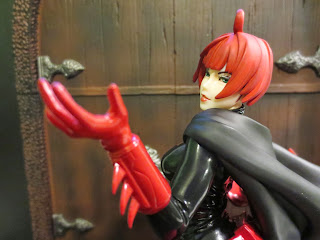 Batwoman is another amazing entry in this series. In fact, she might be the best yet. I don't know, it's tough to say.  I have all of the regular statues except for Supergirl and Catwoman (I didn't pick up any of the paint variants or the second Wonder Woman) and the only ones that I think could give Ms. Kane a run for her money are Poison Ivy, Wonder Woman, and maybe Power Girl. Still, this is an Epic piece and worth picking up for any fan of these statues or of Batwoman. I'm thrilled to have her on my shelf. I really can't pick out any faults with the piece and once again I'm amazed by Kotobukiya's excellent craftsmanship and attention to detail. Kotobukiya puts out bishoujo statues in from a few different properties, but fortunately they seem to really take their time on them. Next up in the DC line is Zatanna. There is also a Black Canary they keep teasing that should be coming out sometime in the future. There are still plenty more DC characters Kotobukiya could get to, so let's hope this line lasts well into the future! 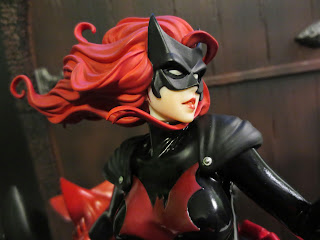 By the way: If you have the Kotobukiya Bishoujo Catwoman or Supergirl and you're interested in selling or trading them, shoot me an email at barbecue17 @ actionfigurebarbecue.com (just leave out the spaces). I'd really like to complete my set!