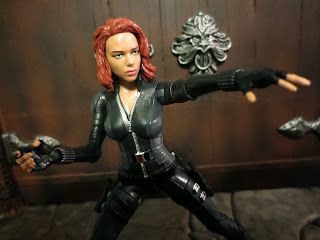 Last year I had the chance to review a few of the figures from the Captain America: The Winter Soldier tie-in series of Hasbro's Marvel Legends Infinite Series since The Reel Brad Bell had picked up a few of the figures and allowed me to borrow them for a few days. I was impressed by the line but never ended up purchasing any myself, partially due to the fact that I could never find Black Widow. Well, I finally found her. I found her online at a decent price and jumped on the opportunity to add an articulated version of Scarlett Johansson's excellent portrayal of Natasha Romanoff to my ever growing collection of 6 inch super heroes. While Black Widow hasn't gotten her own movie she's definitely a major player in the Marvel Cinematic Universe and it's good to see that Hasbro has been supporting her to some extent (although they've really dropped the ball for Avengers 2). Ready for a closer look? Then join me after the break... 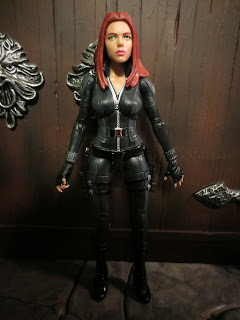 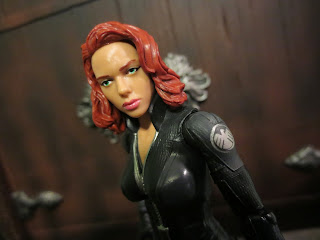 *So far Natasha Romanoff has appeared in four films in the Marvel Cinematic Universe and has had four unique outfits: Iron Man 2, The Avengers, Captain America: The Winter Soldier, and Avengers: Age of Ultron. This figure, representing her Winter Soldier look, was the first movie-based Black Widow figure to be released in the 6 inch Marvel Legends scale (an Age of Ultron version is coming soon in an Amazon.com exclusive set). While it'd be great if we got all of her costumes, Hasbro did do something really cool by including swappable portraits with her shorter, wavier hairstyle from The Avengers and her long straight hair style from The Winter Soldier. The heads swap easily, have a pretty decent resemblance to Ms. Johansson, and are a passable way to have a Black Widow figure to stand alongside your original Avengers cast. I'm partial to the wavier hairdo myself, although my favorite is her look in Iron Man 2. Too bad we never got that figure in the 6 inch line. 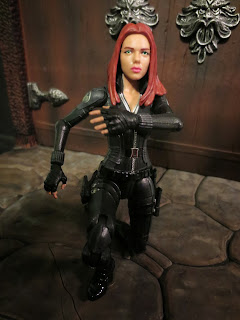 * The articulation overall is pretty swell. The figure feels rather sturdy and features a few joints that work fantastically such as her double jointed knees, her swivel/hinge ankles, and her mi-torso joint. Black Widow has some pistol holsters attached to her belt which you might think would hinder her articulation but guess what? Just like all of the people who hate on Iron Man 2, you'd be wrong! Hasbro wisely chose to make the holsters separate pieces that are attached to the thighs and not to the belt. The hips aren't restricted by them at all. Clever! 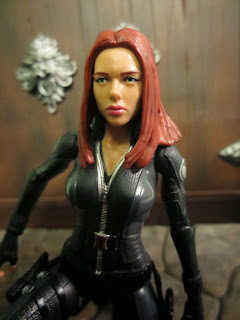 *Natasha's outfit is great! Her jumpsuit looks to be made form a variety of materials and that's absolutely reflected in the texturing of the sculpt and in the paint work. A mixture of glossy and flat surfaces really helps to convey the impression of the different materials and, with the nice, clean paint work (particularly on the S.H.I.E.L.D. emblem on the shoulders, things look great. 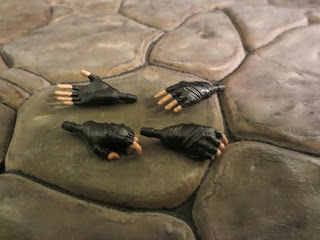 *I'm always happy to see swappable hands on a figure in the 6 inch scale. It really adds a lot to a figure, especially when the hands feel sturdy and there's no fear of breakage. These work wonderfully. 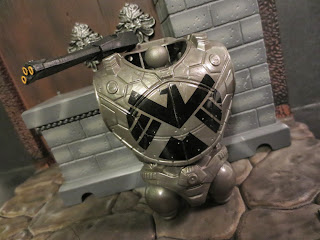 *I probably won't get the chance to build Mandroid but the pieces look cool. I'll probably try to trade them to someone. Still, they're a big extra if you're someone who wants to complete a full series of figures. 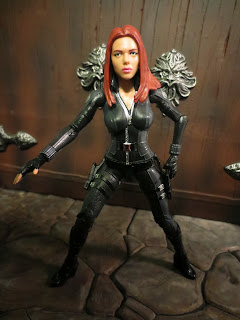 * Overall the articulation is pretty standard for a Marvel Legends figure but I'm a bit bothered by the limited movement of Black Widows hips. For someone who is an excellent martial artists and should be able to deliver flying kicks and roundhouses like younger, more attractive Chuck Norris, Black Widow's hips are rather restricted. I like the look and feel of the "T-bar" hips that Hasbro has been using lately but the range of motion is just too limited to pull off more extreme poses. It's also odd that Hasbro chose to give her swivel wrists with no hinge joints on them. Maybe it's because they're swappable? 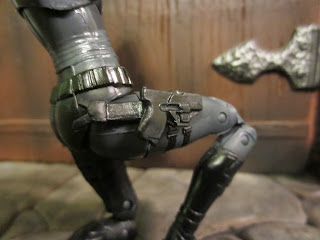 *So..Black Widow has holsters on her hips with pistols molded into them. They're not removable and she includes no additional pistols. What? If there is someone who absolutely should come with some firearms, it's Black Widow. She's a trained Assassin and an agent of S.H.I.E.L.D.! Why wouldn't we want her to be able to use her guns! Unless you have a ton of spare 6 inch scale pistols sitting around in your parts bin you'll be a bit aggravated by this. It kind of makes the alternate pistol grip hands she comes with seem pointless, y'know? I've seen promotional shots of Black Widow carrying the shoulder gun from Mandroid, but that just seems silly. 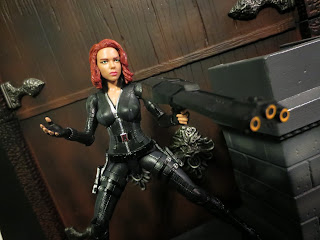 I really like this figure. I put the Marvel Legends Infinite Series (as a collective) on my best of 2014 list and while I didn't own Black Widow last year, having her in hand now definitely reinforces in my mind that I made the right call. I think the likeness is very good, particularly for a mass market 6 inch figure, and the sculpt and paint of Ms. Romanoff's costume is excellent. The articulation is a bit of a mixed bag and the lack of usable pistols is definitely a negative but the inclusion of two separate portraits definitely helps me to overlook some of these problems. Overall I'm pretty glad that I finally sought out this figure and added her to the collection. She's a Great figure and well worth tracking down while you still can. I really want the upcoming Avengers: Age of Ultron set that comes with a a new Thor, Hawkeye, Dr. Bruce Banner, and Black Widow in her new costume, so hopefully it won't take me a year to or more to get around to reviewing that set!

As for other Marvel Legends, I've reviewed: