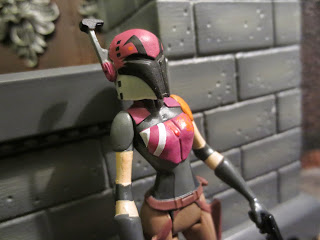 The distribution for Hasbro Star Wars: Rebels line has improved over the past couple of months and I've finally been able to find more of the figures I've been looking. Today I'm checking out another Mission Series 2 pack that features Sabine Wren and a Stromtrooper. I like all of the crew members of the Ghost in Rebels but Zeb and Sabine are my two favorites. I reviewed Zeb quite a few months ago and I've been looking for Sabine for quite sometime, so I was incredibly thrilled to find her in a Kohl's while they were having a sale. I paid a bit more for her than I would have paid at a standard retailer but the price was worth it to pick up Sabine. She's an incredibly cool character both visually and personality wise and it's great to have her on my shelf alongside Zeb and Ezra. Of course she also comes with a Stormtrooper so she has someone to fight. Let's take a closer look at these figure, shall we? More Mandalorian mayhem after the break... 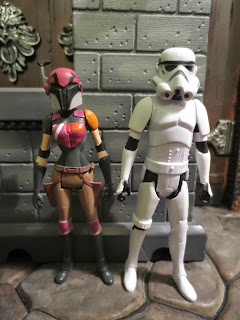 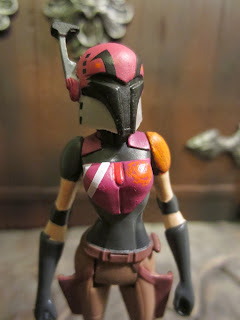 *Let's be honest: With her funky hair Sabine is without a doubt one the most unique looking "human" in Star Wars Rebels. She's a cool, confident lady who knows how to handle herself in a fight and never fails to stick it to the Empire. She's a Mandalorian with a slick uniform that just looks awesome. Sabine is an amazing character and this figure looks really good. It nicely captures the animated aesthetic of Rebels and seems to get Sabine's smaller frame just right. 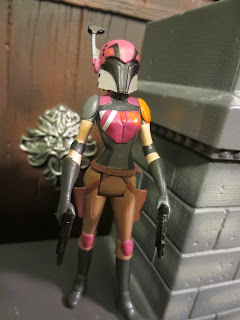 *There's some nice detail work on this figure. The sculpting is swell but the paint is excellent. Lots of little details such as the wicked detailing on the helmet, the logo on her chest plate, and the assortment of arm pads and knee pads on Sabine's limbs all look really good. I love that the back of her hair is sticking out from the bottom of the back of her helmet. 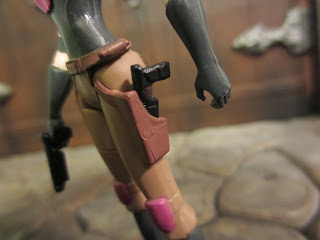 *The set of two figures comes with three accessories: The Stormtroopers E-11 blaster rifle and Sabine's WESTAR-35 blaster pistols. For being fairly small the weapons have some crisp detail on them and fit the character's well. I love that Sabine actually has holsters for her pistols. They're not terribly snug but they definitely fit. 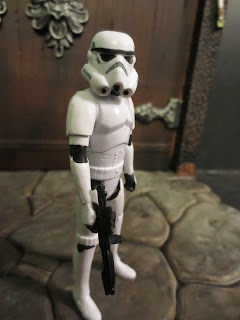 *It's gotta be said that both of these figures do feel nice and sturdy. If kids do manage to grab these they'd be able to play with them with little fear of breakage. 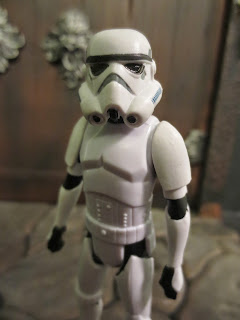 *This Stormtrooper is the exact same figure that was included with Zeb, so I've basically already reviewed it. That's not a negative in and of itself but what is a downer is the fact that Stormtroopers have been done so many times (and so well, too) that getting this stripped down figure with the minimal articulation is somewhat disheartening. It's tough getting a figure of a character that is absolutely less impressive than what has come before it in the same scale. 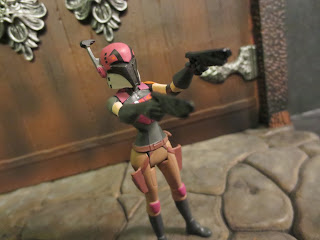 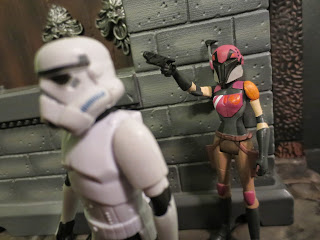 I think at this point in time six of the figures on my most wanted action list are highly articulated, collector grade versions of the Rebels crew. I've really come to like this cast and I'm eager (and perhaps also a bit anxious) to learn what happens to them over the next season. If  had to pick one Rebels character that I'd like to see in Star Wars: The Black Series, though, is would be Sabine. Everything about her is just pure win and I'd love to have a fully articulated version with working holsters, a removable helmet, and killer hair to proudly display on my Star Wars shelf. As it stands this is a good set of figures. The Stromtrooper's a bit weak but I do like the fact that kids buying these (if they can find them) are getting the chance to army build). The Stromtrooper is definitely the weaker figure in the set, however, as Sabine Wren is a very good figure. She reminds me of the work that Hasbro was doing around 1998 with the Expanded Universe subset of Power of the Force II which isn't a knock. She seems like an older figure to me, but a well done one. She's not the best Sabine I could imagine but, for right now, I'm happy to have her. Overall I'm giving this set a Great rating due to the strength of the Sabine figure. Now I've got Zeb, Sabine, and Ezra. Oh, and I just picked up another figure of the Rebels crew that I'll be reviewing in the next day or so. Want a hint? This crew member of the Ghost is mentioned in the new Star Wars book Lords of the Sith by Paul S. Kemp. Stay tuned!