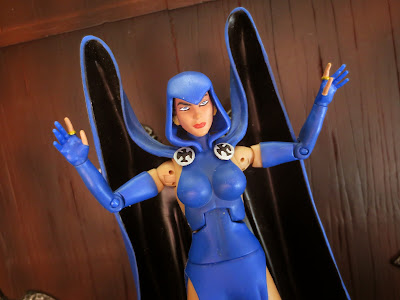 Since I've been doing an informal look at the evolution of Marvel Legends articulation based on some various Toy Biz and Hasbro Marvel Legends figures I've recently acquired, I thought it might be interesting to look at a DC Universe Classics figure from Mattel. Starting in 2008 as a successor to Mattel's earlier DC Superheroes line (which itself was an evolution of Mattel's even earlier evergreen Batman line), DC Universe Classics owes a great deal to Marvel Legends. It's style, inclusion of build-a-figures, use of character variants, diverse character selection, and even it's name were all evocative of the Marvel Legends formula that Toy Biz had found great success with and that Hasbro had taken over by 2007. Today I'm looking at Raven from DC Universe Classics' 15th series that included a build-a-figure- of Validus. Since I ordered this Raven loose she didn't come with the part, but I'd probably never pick up the other figures anyways so it's no skin off my back. Ready for a look at Raven? Then join me after the break... 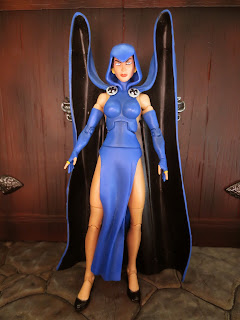 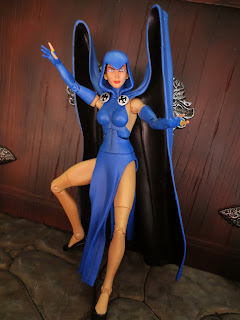 * With their earlier DC Superheroes line and DC Universe Classics I really believe that Mattel almost hit the nail right on the head when it came to articulation. Raven feels solid and is very easy to pose yet her articulation doesn't seem to overly affect the aesthetics of the sculpt. While I wish Mattel had added swivel/hinge wrists onto the figures and had worked to improve the ball jointed head range of motion, overall Raven is another example of the great articulation that was standard for this line. Raven poses wonderfully and looks great in a variety of mystical maneuvers! 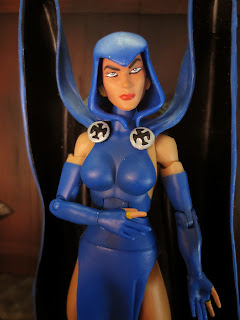 * Utilizing the Four Horsemen really helped to give DCUC some beautiful sculpts and a nice, cohesive look to the line. While Mattel (like Toy Biz and Hasbro before them) was all about reusing bodies, Raven is one of those figures where there is an almost seamless integration of new and reused parts. The hood over hew headsculpt looks nice and Raven herself has an attractive but severe appearance. While many of the details of her costume are painted on, the paintwork is clean and the addition of the robe around her waist really helps to sell her costume. 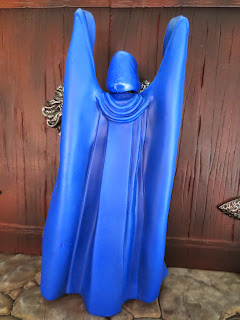 * One of the eternal collector debates will always be plastic versus cloth capes. DC Universe Classics almost always used plastic for the capes in the line which often created problems in posing characters. Raven's cape definitely does not contribute to her poseability but can you imagine a cloth cape being able to mimic the appearance of her cape in the comic panels? The way this cape flares up at the top really gives this figure a lot of character and personality and helps Raven to stand out on the shelf. It also helps her to stand up but doesn't give off the appearance that she's leaning on it. 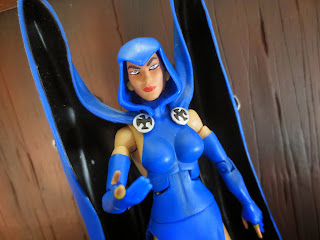 *I really don't have any. Raven really impressed me! 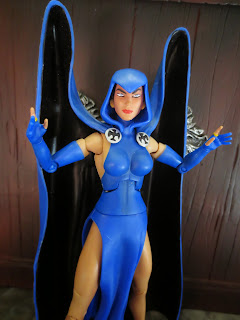 Overall I'm a much bigger fan of DC Universe Classics than I am of Marvel Legends. Of course I'm a bigger DC fan, but DC Universe Classics always felt more consistent when it came to articulation and sculpting. Of course, Marvel Legends still exists because not only did Hasbro adapt the line to fit new trends (movie based waves, different sized waves, etc.) but Hasbro also seems to have less trouble releasing newer characters where DC Universe Classics (and it's spin-off lines) tended to focus on older characters. Anyways, Raven is a gorgeous figure and I'm glad I snagged her. If you're interested in trying to complete a DC Universe Classics Teen Titans, you can still snag her fairly easily on the secondary market. I'm giving her a Great and a 1/2 as she definitely stands out in the line!

As DCUC was winding down, Mattel tried to focus more on Batman with Batman Unlimited. Of course, the line didn't find much success as it was almost all Batman with a few repaints thrown in.
Beware the Batman
The Dark Knight Returns Batman
Planet-X Batman
Vampire Batman

Young Justice: Invasion by Mattel
Batman
Posted by Barbecue17 at 5/24/2015