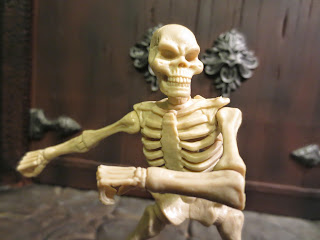 Yesterday I reviewed Baron Dark, the first figure in October Toys' new revival of 1994's Skeleton Warriors. Today I'm looking at one of the generic army builder figures in this line: The Bone Titan Skeleton. October Toys' Skeleton Warriors figures utilize the Glyos system which means they can easily be disassembled and used with other Glyos compatible toylines. It also means that basic parts will be able to be reused multiple times in the future to create new Skeletons. The Bone Titan Skeleton is a more generic skeleton that shares most of his body with Baron Dark but lacks all of his adornments, paint apps, and his unique headsculpt. While the Bone Titan Skeleton is available on October Toys' website it was also an additional add on during last year's Kickstarter campaign. Ready for a look at this bare bones figure? Then join me after the break... 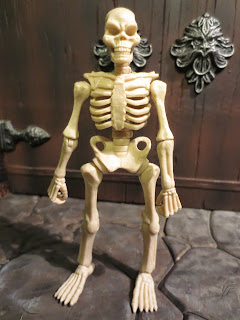 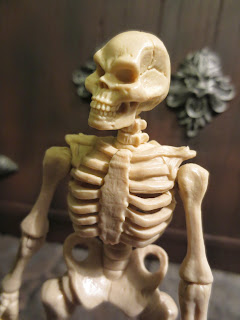 *George Gaspar is a great sculptor and, once again, I'm excited to see his work in this larger scale. This is an excellent toy skeleton sculpt. It's detailed enough to be menacing but it has a nice, toyetic quality about it that keeps it fun. There's a lot of nice, fine details on the bones that you might not even realize are there until you look closely. Places like the spine, fingers, and toes have great definition while the head sculpt is killer. I'd love to see this headsculpt with a nice dark wash. It's very impressive! The head sculpt, shins, front rib cage, and feet are different on this figure from Baron Dark. 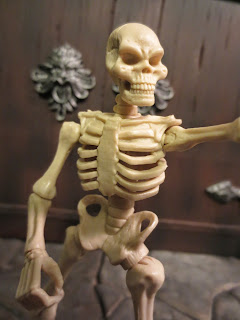 * I imagine the point of this figure is to help justify the costs of the molds for the Baron Dark figure, so the fact that this is an unpainted and reasonably priced figure keeps the lack of paint from feeling like a negative. I'll admit that I really like the bone color this was molded in. They nailed the color of what imagine a decrepit old in a fantasy world would look like. 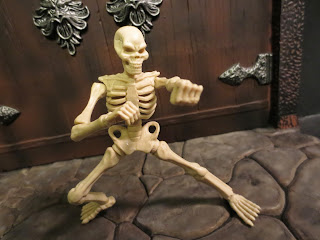 *The articulation is great. This guy is loaded with swivel/hinge joints and can assume a number of crazy poses. Watching this guy move around definitely makes me think of the Deadites in Army of Darkness. He's equal parts fun and sinister! I'd love to see someone make some stop motion videos with this guy! 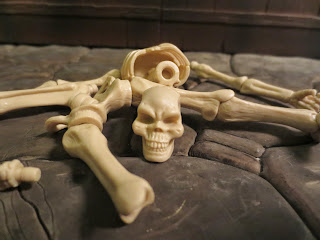 *While I'm not sure that the Glyos system added much to Baron Dark (he's a named character and I don't really want to take him apart) I can see the ability to dismember this figure being much more of a draw. Customizers, diorama builders, and perhaps even tabletop gamers could definitely find some great used for random removable bones. You can build even greater monstrosities, create scenery for your dungeon diorama, or kit-bash this figure with others. 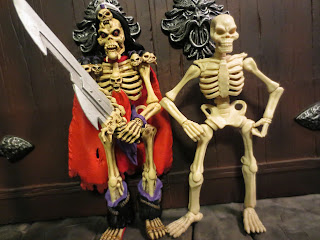 *I mentioned this in my review of Baron Dark but, once again, I'm a little perplexed as to what scale this line is actually in. Baron Dark stands almost 5 1/2 inches tall, the Bone Titan Skeleton stands around 4 3/4 inches, and yet the side of Baron Dark's box calls him a 1/18th scale figure. Is the Bone Titan Skeleton an average sized human in this line with Baron Dark being larger? Is this supposed to be a larger skeleton (hence the Titan in his name) and we'll have smaller figures down the line? I'm still confused. I guess I'm also a bit surprised that October Toys didn't go with a 1/18th or 6-7 inch scale skeleton. One of those scales seems like it would have been far more desirable to the majority of collectors as the skeletons would have had multiple lines that they were compatible with. What lines these days are around the five inch mark? I can only think of McFarlane's The Walking Dead, Halo, and Assassin's Creed lines. 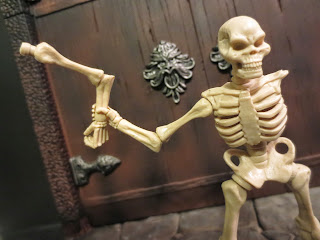 *I would have liked for this guy to come with some kind of accessory. A generic sword or spear would have been nice. As he is he's a bit...bare bones. Bare bones. 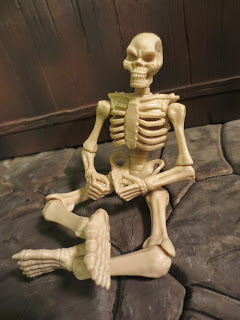 This is a fun toy and well worth the $10 asking price. He looks cool hanging out on your shelf or providing Baron Dark with a little extra muscle. I guess my biggest concern is that I'm just not clear what scale this line is going to be in. Granted, that doesn't affect my enjoyment of this figure much, but it's still gnawing at my mind. As a toy, though, this guy is fun. He's a great desktop toy: Pose him, disassemble and reassemble him, and put him in wacky places. I'm giving him a Good and a 1/2 rating as he's better than your average action figure and definitely something I could see myself buying in different colors over time. I'm sure we'll see some cool variants, too. Even if you're interested in Skeleton Warriors this guy definitely needs to be on your radar.

I reviewed Baron Dark yesterday. I haven't reviewed any other Skeleton Warriors toys but I have reviewed other October Toys releases: