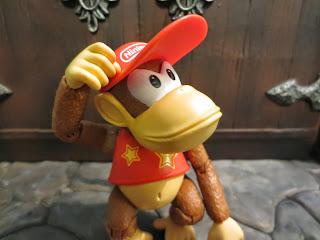 In the newest series (1-2) from Jakks Pacific's World of Nintendo line we get a few sidekicks: Luigi, Toad, and Diddy Kong. It's Diddy who I'm reviewing today! I still remember picking up the amazing Donkey Kong Country shortly after Christmas of 1994. I didn't play many video games when I was in grade school that I can remember (renting a video game was a special and infrequent rare treat) but the Donkey Kong Country series managed to become must buys every year. In all honesty, though, my favorite Diddy Kong game is still Diddy Kong Racing. I'm never been much for racing games but that game was amazing an the adventure elements really appealed to me. I'm thrilled that Donkey Kong already has his little nephew to pal around with as they explore, break bananas, and fight bad guys! Ready for a look at this cheeky little monkey? Then join me after the break... 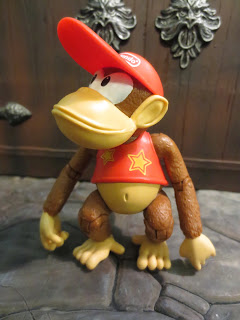 Accessories: A bushel of bananas and a cardboard banana box. 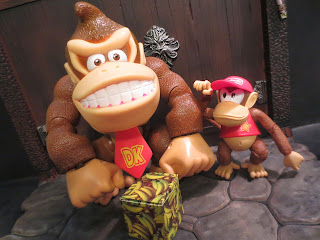 *Diddy looks awesome with Donkey Kong. The styles go together so well that it's almost like Diddy completes DK. These are definitely figures that look better when displayed as a group! They're too much fun! 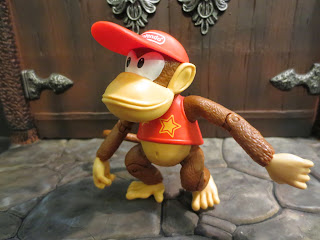 *Diddy's articulation is actually better than the larger Donkey Kong's. It's really not that he has more articulation but that it's a bit more well thought out and tighter. Diddy can stand on his own perfectly and can take some really fun poses. The quality of this toy is just excellent and feels very durable. 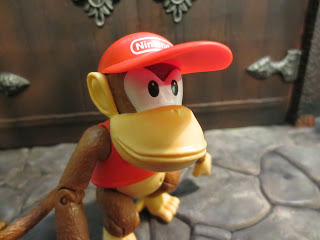 *Diddy looks like Diddy. Seriously, the figure is very well designed. His monkey parts look furry and have some soft but decent detailing on them while his hat and shirt are separate pieces. They're permanently attached but they're not part of the same sculpt as the body which gives them a more realistic and mixed media-esque appearance. The face is spot on, too. It can be tough to turn Nintendo's characters into decent looking toys but I think Jakks is really getting the hang of this. 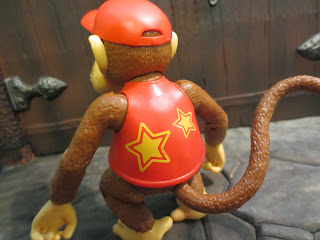 *Overall, there isn't much paint here as most of the parts are molded in their respective colors. What does stand out, though, are the stamped stars on Diddy Kong's shirt and the Nintendo logo on his hat. These are both really neat and clean. 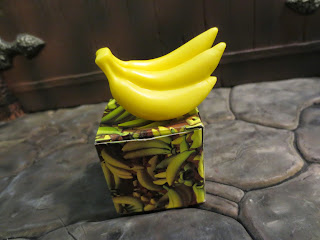 *Diddy Kong comes with a mystery accessory like the other basic figures in this line. He gets a bushel of bananas which is pretty fun. I mean, the Donkey Kong Country games are basically all about bananas right? 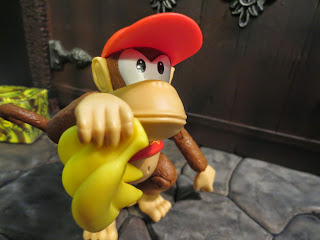 * Well, this is Diddy Kong. Don't get me wrong, I like Diddy Kong, but he is kind of lame.

*The bananas are fun but a bit of green paint on them would have made them standout a bit more. They're pretty flat since they're just molded in yellow plastic. 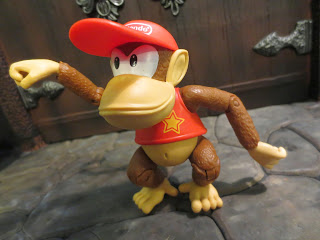 Diddy turned out...really well, actually. Seriously, he's not my favorite Nintendo character by any stretch of the imagination and yet I still have a nostalgic soft for him. This figure looks pretty good, is well made and well articulated, and is rather fun to play around with. He's another hit in this line and, while there are other figures I like better because of the character, I think that as an action figure Diddy deserves a Great and a 1/2 rating. Seriously, I feel like I should drop a giant banana near this figure and clap for it. I'm not sure if Donkey Kong Country is popular enough for Jakks to make other figures, bit I'd love to see Dixie Kong, Funky Kong, Candy Kong, and Cranky Kong in this scale (Jakks has a smaller Cranky Kong already out). What do you think? Do you want more DK characters? Do you want a Donkey Kong Rap boxed set? Share in the comments!

I've reviewed all of series 1-1 and part of series 1-2, including:
Bowser
Donkey Kong
Link
Mario
Samus
Wario
Yoshi
Posted by Barbecue17 at 5/04/2015