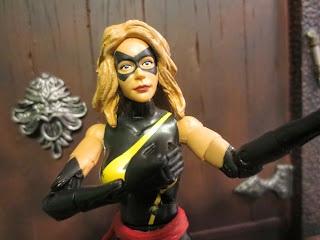 So....I accidentally bought this figure. After reviewing the new Marvel Legends Captain Marvel, I decided I wanted the Ms. Marvel version of Carol Danvers as well. Target had a decent exclusive three pack that came out late last year that seemed to be fairly inexpensive. A quick E-bay search let me to see the Marvel Legends Ms. Marvel for a very, very reasonable price. I had done a quick check to see if there was any older Toy Biz Marvel Legends Ms. Marvel and came up empty-handed, so I decided to order this one assuming it was the newer Hasbro figure (the picture wasn't that great). She arrived a few days later and, to my surprise, I was looking at a figure that is almost 10 years old. Yup, this is indeed a Toy Biz Ms. Marvel, but guess what? Toy Biz didn't call her Ms. Marvel. They called her Warbird using the alias Carol Danvers used in the 90's when she went to rejoin the Avengers. Anyways, I figured I'd keep her around since it was my mistake and it was interesting to look at a Toy Biz Marvel Legends figure from this era. I actually only ever bought a few Toy Biz Marvel Legends from back in the early years of the series (all of series IV and a few scattered figures from series V) and didn't end up picking anymore up until Hasbro took over in the late 2000's, so a figure from the middle/end of Toy Biz's run is a bit of a novelty to me. Warbird was part of 2006's Wal-Mart exclusive Giant-Man wave. ready for a quick look at an older Toy Biz Marvel Legends figure? Then join me after the break... 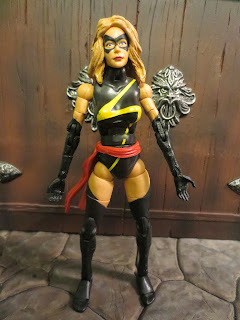 Accessories: Giant Man lower torso Build-a-figure piece and Avengers Annual #10 comic book (both missing from mine as I bought her loose). 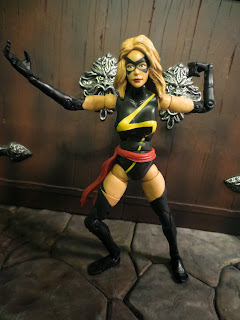 *There is so much articulation here! I never really collected Marvel Legends back in their heyday although I was familiar with them. Still, getting one of these figures in hand is definitely an interesting thing. While there are plenty of joints I could do without (the fingers and toes come to mind) I'm definitely amazed at how well things like the rocker ankles and the hinged shoulders function. I mean, the hinged shoulders I'm talking about actually extend out of Warbird's torso so if you want to move her arms out from her side or put her arms above her head in a flying pose, you can! I'd love to see this joint become more commonplace. It's basically like the lateral shoulders thhat NECA's Gears of War 3 figures used to allow them to hold a variety of weapons with both hands. 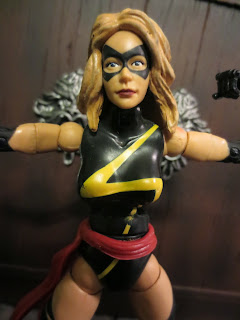 *I like the headsculpt. It's probably not as nice as a modern figure but it doesn't look out of place. Toy Biz sometimes had some trouble getting female faces to look correct. Carol doesn't have that same problem. While it might be a bit plain it's still rather attractive with some excellent paintwork. 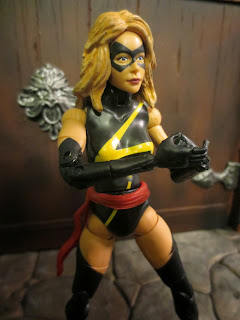 *So, here's the thing that most stands out as a negative to me: Ms. Marvel looks incredibly segmented. While the articulation is incredible, it really does make the figure look awkward. Finding the right balance between useful articulation and an aesthetically pleasing sculpt is definitely a challenge when making an action figure and I think it's clear in hinge sight that Toy Biz was really focused on articulation. Ms. Marvel's arms are truly bizarre. They're far too slender and look awkward as all get out. In my mind I can hear a little Jeff Goldblum speaking about toymakers being so preoccupied with whether or not they could offer all that articulation that they never stopped to think if they should offer it. 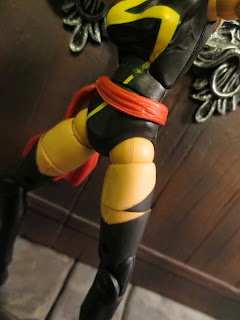 *Being that this is an older used figure, it's tough for me to know what paint flaws can be attributed to Toy Biz and what are scuffs and wear from the previous owner. The lightning bolt on Carol's costume is a bit scuffed in places but I have no logical way to know whose responsible for that? I do know, however, that the awkward way her thigh-high boots were painted on definitely hinders the look of the figure. Carol's boots have a flair to them on top and the tops are cut in half by the thigh swivel. When these joints aren't aligned properly, things look really strange with the tops of the boots and the skin of Carol's thighs. Awkward! 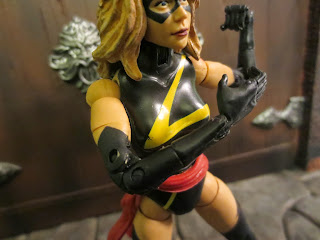 *The red sash that Ms. Marvel/ Carol Danvers/ Warbird wears around her waist in this costume is always an awesome accent piece but rather than leave free floating and separately molded, Toy Biz tried to glue it on. When I got this figure the glue had come loose revealing the adhesive filled holes on Warbird's waist. In hindsight, a free floating piece (like on the new Captain Marvel figure) would have been the way to go. 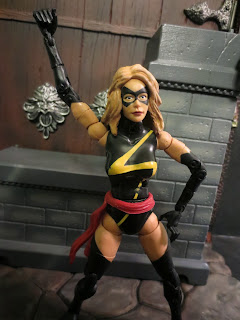 To reiterate: This is an almost 10 year old figure that I didn't mean to purchase. Rather than review this figure because I'm expecting to either buy it or skip it based on my critique I'm simply throwing out some thoughts. When I eventually write a book on the history of action figures, there's no doubt that Toy Biz and Marvel Legends will be given a ton of credit for their contributions in action figure history. While superhero figures weren't uncommon before Toy Biz came along, Toy Biz really worked to make them not only a dominate force in the market but also continued to cater to the burgeoning collector's market of the early-mid 1990's. With Marvel Legends (having grown out of Spider-Man Classics) Toy Biz really ushered in the modern era of action figure collecting. So many of the elements that Toy Biz introduced with Marvel Legends are still being done by companies today. Looking back at Warbird herself, I imagine at the time of her release in 2006 she was a fairly impressive figure and probably would have garnered a Good and a 1/2 rating, so that's what I'll give her. For history's sake.