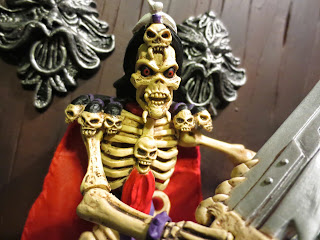 Over 10 years ago OAFE.net wrote this great piece on the beautiful failure of a toyline that was Skeleton Warriors. Skeleton Warriors came out when I was around 10 or 11 and while I didn't have all of them (I only remember having Shriek, Aracula, Grimskull, and the Skull Cycle) I do have some fond memories of how cool they were. They were definitely a key part of the revolution in toys that occurred in 1994 and 1995 when action figures grew up quickly. One day I was playing with bright, colorful Teenage Mutant Ninja Turtles, 90's era G.I. Joe figures, and Mighty Morphin Power Rangers and the next I was playing with Skeleton Warriors, Legends of Batman, Spawn, and Star Wars: The Power of the Force II. While Skeleton Warriors were definitely the black sheep among those toylines that seemed to up the bar for what was possible (and acceptable) in action figures, they definitely made an impression on me. Over the years I've considered picking up the vintage figures but I've always opted for other things. Last year, however, October Toys announced that they had managed to obtain the Skeleton Warriors licence and were bringing the line to Kickstarter. The toys would be a bit smaller than the originals but would be sculpted by the always exceptional George Gaspar and would be compatible with the Glyos range of products. Since I like Skeleton Warriors, October Toys, and Kickstarter funded lines, I jumped on the bandwagon. Just a few weeks ago my Baron Dark figure arrived and I'm finally getting around to reviewing him. Ready for a look at Baron Dark? Then join me after the break... 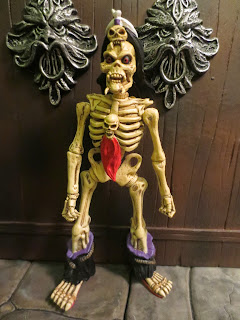 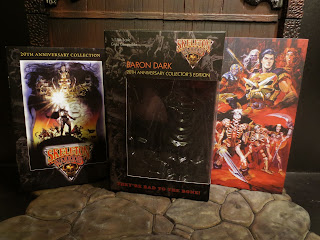 *Rarely do I talk about packaging but I want to mention the packaging here since it's really nice. October Toys went with the window box look that has become so popular lately with lines like Star Wars: The Black Series, DC Collectibles, NECA's Video Game figures, Marvel Legends Infinite Series, and Funko's Legacy lines like Game of Thrones and Magic the Gathering. It's a great look, is very collector friendly, and shows off some beautiful design. This may be just because I ordered through Kickstarter but my figure also came with some cool extras such as a small Skeleton Warriors informational book and an art print by Claudio Mazzoli. 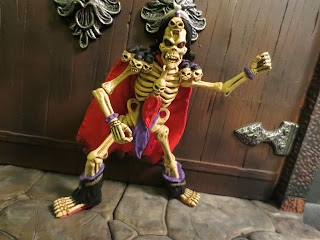 *The articulation is excellent. It's plentiful and feels much sturdier than I initially thought. For me, other than the head, the Glyos system doesn't add much but maybe as more figures get released this feature will come to be more relevant. All of the Glyos joints are easily removable when pulled with firm, even pressure but they still stay in nice and tight. 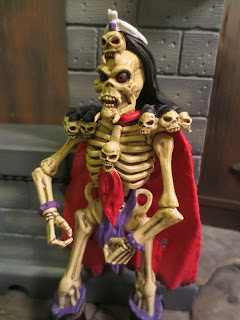 *The sculpting and paint are also rather impressive. I've been a big fan of OMFG! and OTMF! for a few years now but it's awesome to see George Gaspar's work on something larger and more intricate. This is one of the best looking figures I've seen this year as the sculpt and paint perfectly mesh together to give the figure the right feeling of being menacing and unearthly while still having some toyetic qualities. The base skeleton body is excellent and the highlights and wash given to the bones look phenomenal. Little details like the jewel hidden in Baron Dark's rib cage, the intricate detailing of the face, and the separate pieces such as the stained loin cloth and the ragged cape definitely escalate this figure beyond the originals. This looks like great comic art or a fantasy painting come to life. 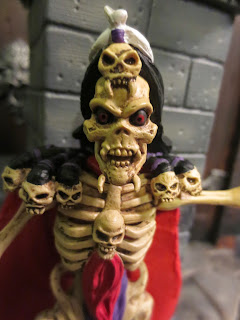 *Good grief! This head sculpt is freaking epic! Seriously, look at this guy! 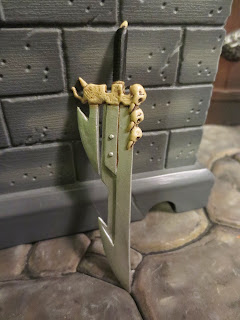 *Baron Dark's sword is excellent. It's definitely one of the coolest looking fantasy weapons I've seen in quite some time. The paint apps are incredibly impressive, right down to the skulls on the guard of the blade. Initially it seems like the sword doesn't fit too well in Baron Dark's hands but the guard has some ridges that slip over his fingers for a nice tight grip. 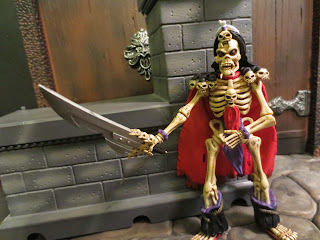 * I want to talk about the scale of the figure for a moment. Baron Dark should be taller than the humans in the line, so his being taller than 5 inches is not a problem, but I'm not sure what exactly the scale for these figures is going to be. The side of the box says that Baron Dark is a 1/18th scale figure and that seems to be how it's been billed, but I'm more inclined to believe that October Toys actually has made these in a 5 inch scale. Otherwise, Baron Dark is going to look really, really huge next to 1/18th scale figures. Maybe I'll feel better about the scale when I see another figure released. I'm a little surprised that October Toys went with this smaller scale since it seems like these would have been popular with Masters of the Universe Classics fans. I do find it odd that these are actually smaller than the vintage figures; that's a bit of a rarity, don't you think? 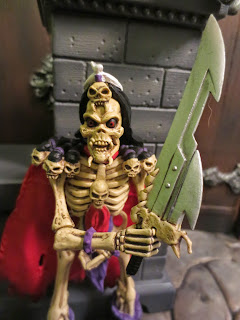 *I cannot get Baron Dark to stand for the life of me. I've tried and tried but, unless you remove his cape, Baron Dark is not able to stand on his own. The cape is heavy and the bottoms of his sandals are slick. 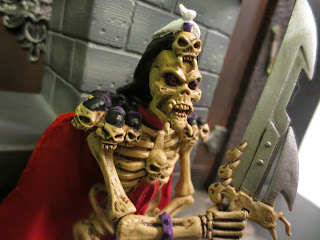 I'm really happy with how Baron Dark turned out as an action figure. My biggest complaint is really about the scale: I'm just not sure that I like the scale of these figures as I would have preferred that they be in scale with 6-7 inch figures rather. Still, October Toys has really put out a fine action figure. The beautiful packaging is truly the cherry on top of what is an excellent action figure. They really care about this license and it shows in every detail. I'm interested to see what happens next with this line. How big of a fan base does Skeleton Warriors actually have? Hopefully fans of October Toys and fans of cool toys in general can help to make the future of this line a reality. In all honesty I imagine most folks would be happy if we got all eight of the figures from the line and the never produced Talyn redone in this new series. That seems like a manageable goal and with an initial figure that is definitely Great, I think it can happen. 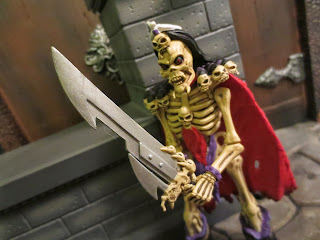 I haven't reviewed any other Skeleton Warriors figures but I have reviewed a few other things from October Toys: