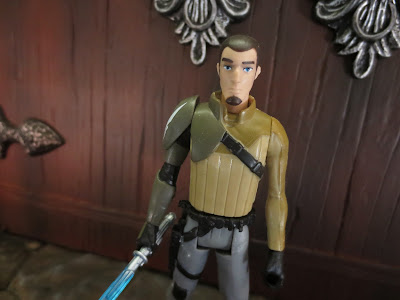 Now that I've finally picked up Kana Jarrus I have five of the six crew members of The Ghost from Star Wars: Rebels. It's been a bit tough to find most of the one's I've found (except for Zeb who definitely seems to have been abundantly produced) and I fear that unless Hasbro rereleases Chopper at some point that I'll never own him. The combination of his scarcity and popularity definitely has contributed to the high price he fetches on the aftermarket. Anyways, this review is about Kanan so I probably should talk about him a bit. I didn't get the opportunity to start watching through Rebels until after Christmas so my first exposure to the character was actually through A New Dawn. Hasbro definitely expects Kanan to be a pretty popular character because they've released this exact same figure multiple times! You can get him in the Reveal the Rebels Toys R' Us exclusive pack, as a pack in figure with the Phantom Attack Shuttle, as the second figure in a Mission Series set with Ezra Bridger in his Imperial Cadet uniform, and as the single carded figure from the Saga Legends line that I'm looking at today. Ready for a closer look at Kanan? Then join me after the break... 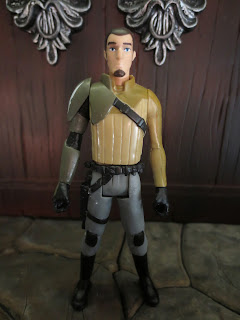 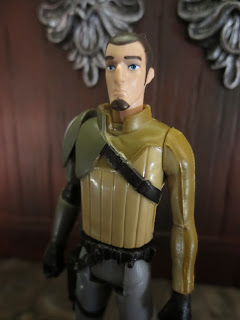 * I like Kanan's sculpt. Rebels has a great animated style and that has absolutely translated over to the action figures. While Kanan is a bit less visually interesting than Sabine, Hera, or Zeb, he does have some interesting design elements that call to mind other Star Wars rogues such as Quinlan Voss, Kyle Katarn, and early Ralph McQuarrie sketches. There's a nice amount of detail in the sculpt. I really like the gadgets on Kanan's belt, the ribbed texture of his shirt, and the armor on his right arm and shoulder. 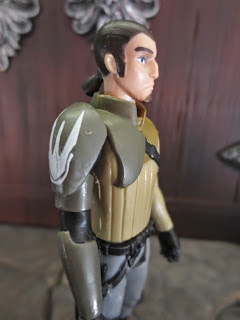 *The paintwork is nice as it's very simple but very clean. Kanan's wearing earth tones so he's not as vivid as the other Rebels cast members, but he looks good. I really like the crispness of the emblem on his shoulder pad. 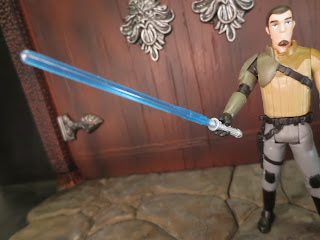 *Unlike Ezra, Kanan actually comes with his lightsaber. It's nicely sculpted, has a painted hilt, and fits well in either of Kanan's hands. Not too shabby. 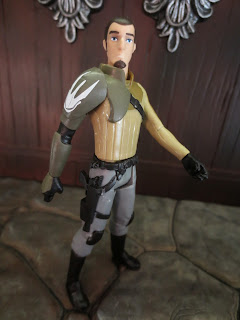 *I'm done complaining that these figures are only given the most minimal of articulation: They are what they are and they're priced in such a way as to reflect that. What does irk me, however, is that Kanan's hands are actually separately molded pieces. That's right: Hasbro actually molded the hands separately (with a little force and maybe some how water they are removable). They spent the time to make separate hands but didn't bother with making them swivel? That's ridiculous, particularly for a Jedi character who comes with a lightsaber. 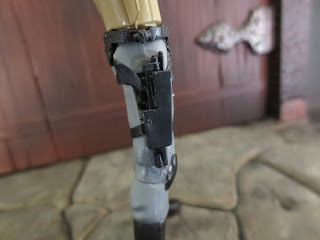 *Kanan has what looks like a DL-18 blaster pistol in a holster on his right hip. Unfortunately, it's not removable. In this day and age I definitely think that's a major step backwards, considering other figures in this same line have removable blaster pistols with working holsters. It's a cool detail but it's frustrating. 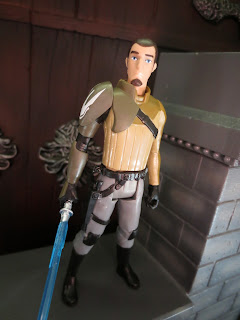 I actually had passed Kanan up a time or two as he came in sets or with a vehicle that I just wasn't interested in.  I'm glad I grabbed him this single carded version when I finally found him, though, because he's a really nice figure. Yeah, it's rather bizarre that Hasbro would actually go through the trouble of molding separate hands for him without articulating them and the non-removable blaster pistol just irks me but overall I have to say that I'm quite satisfied with this figure. The presentation is really nice and Kanan really looks great in this format. He's honestly about as nice as any of the other figures in the line. I'm giving him a Great rating as he really does bring to mind for me some of the best figures in the Power of the Force 2 years. A great, detailed sculpt and an excellent design.