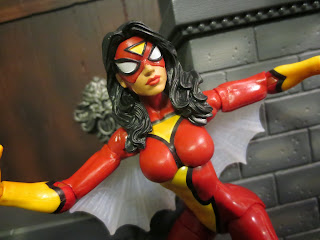 I don't usually dedicate my reviews to anyone but this time I'm making an exception: This review goes out to my good friend Terry who loves Spider-Woman quite a bit. The man even reviewed Spider-Woman stamps back when ThEpic Review was still a thing! Hope you enjoy this one, Terry!

Rumor has it that Hasbro's newest series of Marvel Legends Infinite Series figures should be out within the next month or so which means that in the first half of 2015 Hasbro will have released 4 build-a-figure waves, an Amazon exclusive set, and the Toys 'R Us Agents of Shield back. Oh, and there is that cool Guardians of the Galaxy set coming out, too. While other properties are floundering at retail, Marvel Legends seem to be doing just fine. Today I'm looking at a cool figure from the Thanos build-a-figure wave: Spider-Woman! Originally appearing in 1977's Marvel Spotlight #32, Spider-Woman (AKA Jessica Drew) was initially created at the request of Stan Lee simply to keep any other comic book company (i.e. DC) from using the name Spider-Woman. Thanks to the excellent work of Marie Severin and Archie Goodwin, however, Jessica Drew became a significant character in the Marvel universe. While Toy Biz released Jessica Drew in Marvel Legends back in 2006 it's definitely time she received an update so this new figure is a welcome addition in the newest, somewhat Avengers: Age of Ultron themed series. Ready for a closer look at Spider-Woman? Then join me after the break... 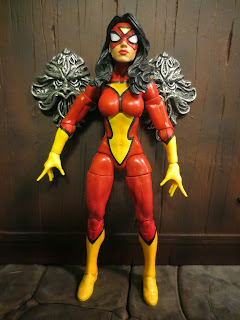 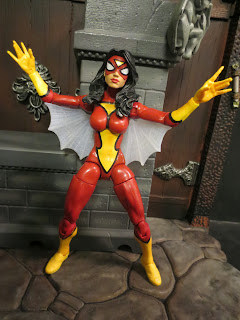 *When someone mentions Spider-Woman, this is without a doubt the costume you think of. Jessica Drew wore this outfit for over 35 years and only recently has she changed it any. It's a great look that nicely accents the vibrant red and yellow of the outfit with some black edging. I imagine that for most collectors, this is the Spider-Woman figure they're wanting to see in Marvel Legends (although her new costume would be sweet to see in a year or two if it sticks around). 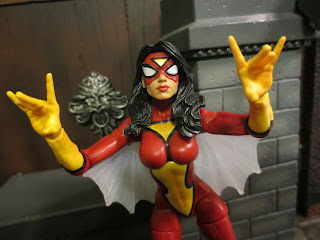 *Jessica's upper body is very nicely articulated. Her ball jointed torso gives her an excellent range of motion and her arms are perfectly designed for poses a plenty. I love her expressive hands! Having the fingers spread out definitely makes her more interesting than if she just had standard gripping hands or fists. Like most modern Marvel Legends figures she feels sturdy and well built. 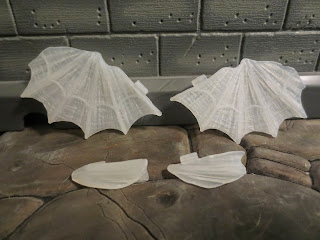 *One of the trademarks of Spider-Woman's costume are the webbed wings that connect from her back to her biceps. They look excellent and dynamic when draw or when rendered in cosplay but things like that can be tough to get right when rendered in plastic. Fortunately, Hasbro has found a rather ingenious way to pull off Spider-Woman's web wings: They've included two sets of removable wings in different positions. One set is open while the other set is retracted. They look great, minimally hinder the articulation, and stay in place securely. They're tough to switch but they stay put, which is nice. They're molded in a translucent white plastic that does give off a webby essence. 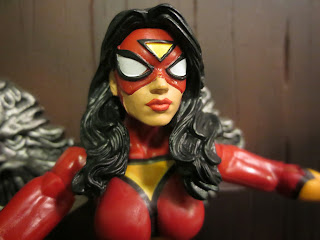 *I like Jessica's head sculpt: Her hair looks great and it actually looks like she's wearing a mask rather than having detail just painted on. Her lips are together and her facial expression suggest that perhaps she's about to either smirk or grimace in battle.  There's room for some interpretation in the expression, which I like. 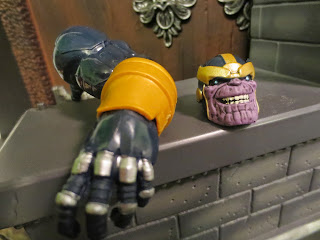 *While Thanos' head and left arm won't be much use to anyone not planning on collecting this entire set (I'm not) I can definitely see the value in including them. Hasbro has delivered some nice build-a-figures over the past couple of years and figures like Thanos, Ultimate Hobgoblin, Odin, and the upcoming Hulkbuster Iron Man seem like some of the best yet.

*Let me get this out of the way: Like with many other figures, and not just the females recently, Hasbro didn't put Spider-Woman's name on the front of the box! She gets a generic title (Fierce Fighters) that she shares with Hellcat. Please Hasbro! Just stop this nonsense! Spider-Woman has been around for almost 40 years, has had her own comic title multiple times, had a cartoon, and has been a member of at least three different Avengers teams. Just put her darn name on the box! 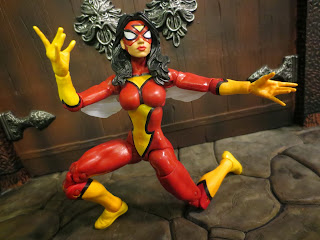 *I praised the upper body articulation of Spider-Woman above but here I'm going to knock the lower body articulation. Well, mostly the hips. The newer Marvel Legends figures (at least most of the females anyways) use ball-jointed hips that are attached to a t-bar (if anyone has a better name for this setup, let me know). Unfortunately they severely limit hip movement and that's a big problem for an athletic, acrobatic character like Spider-Woman. 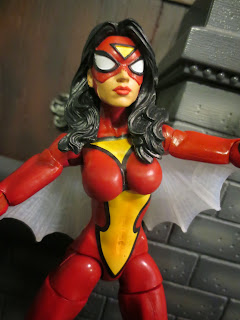 *Jessica Drew has a very striking costume. It's also a pretty simple costume that Hasbro was able to render with paint more than sculpt. Yeah, Spider-Woman's costume is simply painted on the base body. It looks decent but the yellow paint applications over red plastic really look a bit rough. Yellow paint is tough to get right as it is but over red paint it really starts to look orange. The yellow stripe on her stomach is the worst as it also looks a bit gloppy. 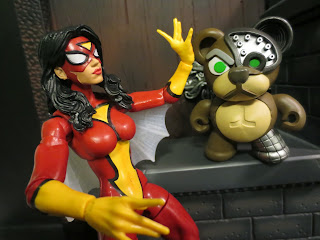 If the paint were a bit better and her hips had a bit better range of motion I'd easily be giving Spider-Woman some very high marks. Still, even with those faults, she's a good figure. Hasbro has definitely upped their game with the Marvel Legends Infinite Series and Spider-Woman is another solid figure. I'm sure that fans are glad to see her back on the shelf since she's such a prominent character and hasn't been available for almost a decade in this line. I like Hasbro's clever method for improving her web-wings as well. As it stands, I'm giving her a Good and a 1/2. She definitely seems like the most difficult figure to find in this series and I'm glad I was able to grab her off a retail shelf rather than having to pay a higher price online (which I probably wouldn't have done). Anyways, if you're a Spider-Woman fan (I'm looking at you, Terry!), plan on building Thanos, or don't yet have a figure of Jessica Drew in your collection, you'll definitely want to grab her. Casual fans, otherwise, might be happier picking up some of the other Marvel Legends figures that have been released lately.

I've reviewed quite a few Marvel Legends on the site, including: