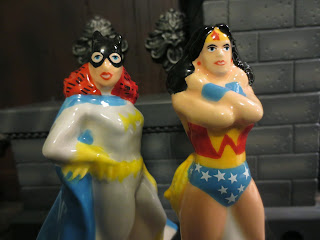 While I collect a number of things (You read the site: You know.) one of my favorite things to collect is Batgirl related stuff. While Batgirl has been seeing a resurgence in popularity (there are multiple high-end statues coming out this year as well as her downloadable content for Arkham Knight) when I decided to start collecting Batgirl stuff in 2007 there just wasn't as much out there. Still, for the most part it's manageable to grab everything I want with Batgirl. That wouldn't be true with Batman, the Joker, or probably even Harley Quinn these days, but with Batgirl it's still manageable and is actually part of the fun. Sometimes I have to actively look for new Batgirl stuff and that's how I stumbled across this salt and pepper shaker set from Westland Giftware. Yes, the set includes a Batgirl salt shaker and a Wonder Woman pepper shaker that connect together via magnets. This is one of those odd things that I stumbled on and just knew that I had to have for my collection. Ready for a look at some super powered salt and pepper shakers? Then join me after the break... 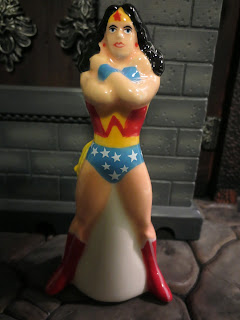 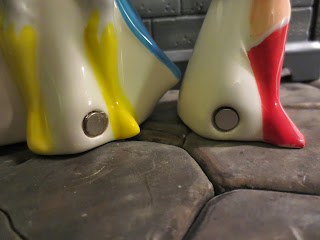 *I have to admit that I really like the magnetic feature of these. At first I didn't get it but the more I looked at these the more realized that not only does it make the shakers display better (which is always the first concern of salt shakers) but it also keeps them more stable. It's a metaphor, really: Batgirl and Wonder Woman are stronger when they stand united! 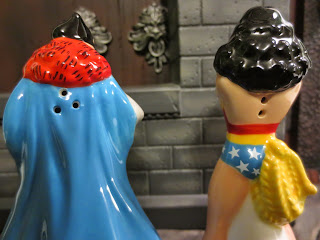 *The salt and pepper...spouts, I guess? I'm not sure what you call the holes, but they're on the characters' backs. I'm glad Westland Giftware went with this design because otherwise the designs would be affected by having to incorporate holes into the heads. By the way, Wonder Woman is the pepper shaker and Batgirl is the salt shaker. I'm kind of glad that Batgirl is the salt shaker because that means she's more popular. I like pepper better and rarely use salt though so, if I were using these, I'd have fewer opportunities to use the Batgirl shaker. 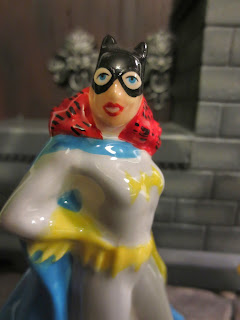 * I'll be honest: These look really, really silly. The first thing you'll notice is the paint work. The paint work on the bodies aren't bad but the faces? Umm...No.  Remember that poorly restored painting of Jesus from an old Spanish church that was all over the news in 2012? Yeah, that's what's going through my mind when I look at these. Look, I knew these were going to be a silly, kitschy kind of collectible but I didn't think they'd be this ill-defined. 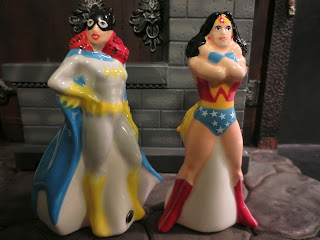 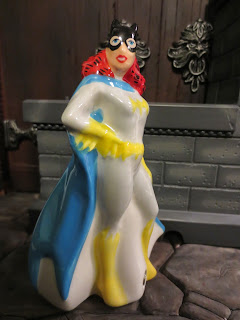 *Batgirl should have been the pepper shaker. I just like pepper. 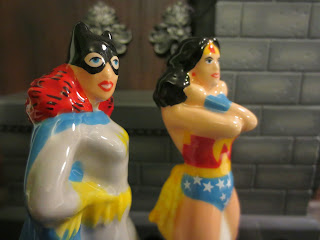 If you really like Batgirl, Wonder Woman, or pepper, you'll probably at least get a kick out of these but they're not good. Seriously, don't pay much for these. They're goofy but not in a good way. I had some of those G.I. Joe birthday candles as a kid that were molded into the shapes of various G.I. Joe characters. Even after they were lit for a bit and started melting, my little candle looked more like Sgt. Slaughter than these salt shakers look like Batgirl and Wonder Woman. The magnetic feature is nice but that's really about it. I'm giving these an Eh. Unless you're a Batgirl or Wonder Woman devotee who wants random stuff like this, just skip these. Unless you're buying them for a housewarming party and want to make someone feel as awkward as possible. Then buy them. But only then.

I've reviewed a ton of Batgirl stuff, including: 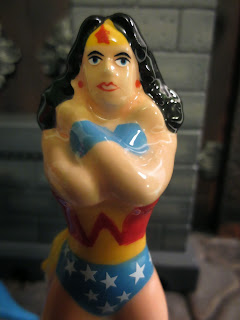 
I haven't reviewed much Wonder Woman stuff on here yet. Just this two-pack from DC Collectibles:
Wonder Woman versus Katana
Posted by Barbecue17 at 5/07/2015