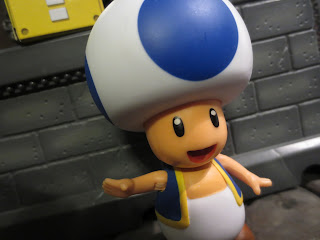 Today I'm looking at Toad from Jakks Pacific's World of Nintendo line. Well, if you want to get technical I'm looking at Blue Toad. Yeah, he's apparently different from the normal Toad pretty much everyone thinks of that has the red dots on his head. Blue Toad has appeared in both New Super Mario Bros. Wii and Super Mario Bros. 2. Yup, in the original NES version of Super Mario Bros. 2 the dots on Toad's helmet were blue (that got changed to red in Super Mario All-Stars and other re-releases). Anyways, no matter what color he is Toad is a pretty significant Nintendo character and it's need to have him around. Still, one only has to look at this guy to see how small and simple this figure is. Is he worth picking up? Read on and learn more after the break... 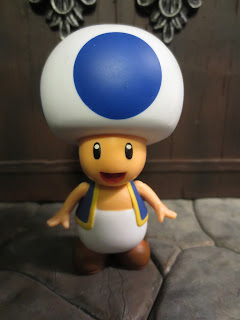 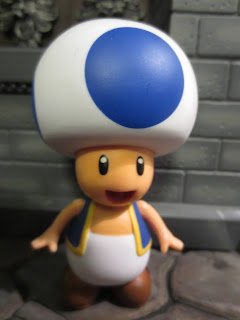 *Well...this figure does look like Toad. It's a very simple toy but I think it does accurately capture Toad's likeness. The paint is simple and clean, too, which keeps things looking sharp. Interestingly the eyes are sculpted and not just painted on. There really isn't that much to say about this figure. 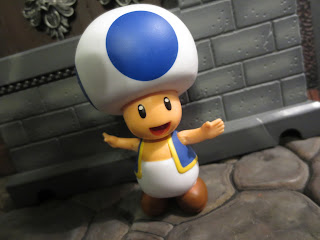 *Toad is really simple. He only moves at the shoulders and his neck. I guess he's not the most articulated of figures but why not at least a ball-jointed head or ball jointed feat? Seriously, there's just not that much here. Toad maybe should have been a pack in with one of the larger figures rather than a standard figure on his own. 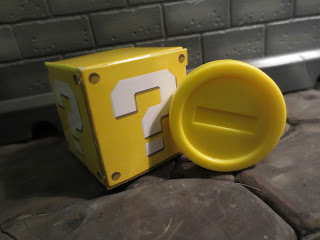 *It's not really a negative that Toad comes with a coin but, since we've already seen this same accessory packed with Wario, it is a bit disappointing since the coin is billed as a mystery accessory. Considering how small and simple Toad is, perhaps he should have came with something larger and cooler. 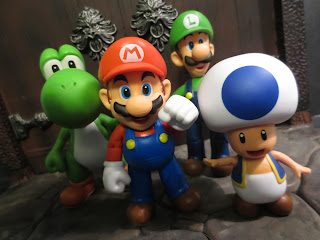 Toad looks good alongside the other figures in this line but he's just so darn small and under-articulated that you're definitely going to feel underwhelmed by him. I mean, compare him to any other World of Nintendo figure released and you'll definitely feel like Toad is a far inferior figure. I have a K'nex Toad that I found in a Geocache that has more articulation than this figure. Of course, will probably get this figure repainted in red (and possibly yellow) again later down the road. Overall, I'm giving Toad an Eh and a 1/2. He's not bad in terms of sculpt, paint, or quality control; he's simply just not up to par with the rest of this line. If you're a major Toad fan or a completest on this line you'll probably want him. If you're just dipping your toes into the water to see what World of Nintendo has to offer, however, just stick with almost any of the other characters.