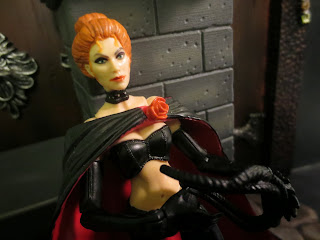 Yup, I'm reviewing another older Marvel Legends figure again. This time it's a figure from Hasbro's first series of Marvel Legends: Black Queen! I'm not fully up to par on my X-Men history, so forgive me, but my understanding is that this is the Phoenix entity in the guise of Jean Grey who has joined the Hellfire Club. Is that right? I was actually looking for the newest Marvel Legends Emma Frost (considering the price that figure is going for I'm done looking) but I stumbled across the Black Queen at a ridiculously low price. Black Queen was a Toy 'R Us exclusive back in 2007 and is largely a repaint of the 2006 Emma Frost figure with a new head sculpt. The figure is pretty cool looking and gives me another chance to look at how the articulation of Marvel Legends figures evolved over the years. Ready for a quick look at Black Queen? Then join me after the break... 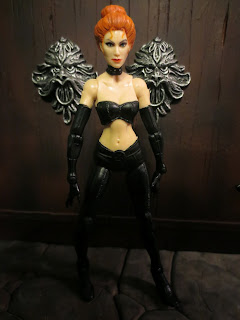 The Facts:
Height: 6 inches (including her hair bun)

Accessories: Whip and a removable cape. 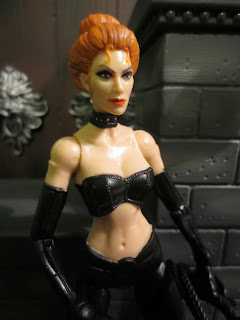 * One of the peculiar debates you'll find among action figure fans is that some like figures that feature toys predominately molded in the appropriate colored plastics while others prefer the painted look. Usually this comes up with heads because some people like the look of the figure's face better one way or the other. One of the thing that strikes me about Hasbro's earlier Marvel Legends is that they seemed quite a bit brighter. There was less paintwork (most of the time) and a glossier overall appearance. I gotta admit, I kind of like the look. 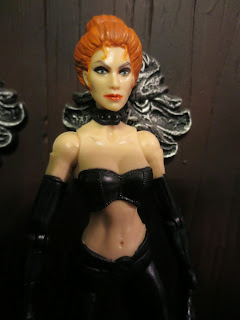 *While it's not the best looking headsculpt ever, I have to admit that I really like Black Queen's headsculpt. The hair has a nice amount of light shading and I'm getting a bit of a Jane Seymour vibe here (that's a good thing). I wouldn't recognize this figure as some form of Jean Grey if I didn't know that's who it was supposed to be but I can see it now. The body sculpt is reused from Emma Frost but I like it. It's a bit different than the Black Queen's typical costume but it works. 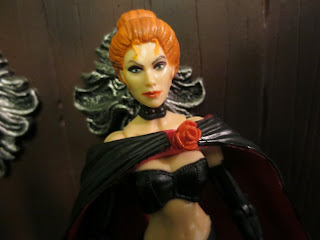 *It's amazing how much the cape does to improve the figure's appearance. The red and black of the cape really makes the rest of the figure just pop! 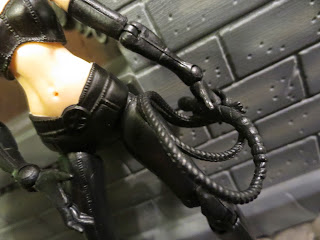 *While neither hand is really designed to hold an accessory Hasbro worked around that by creating a hand loop for Black Queen's whip. It's a decent looking bullwhip that's coiled up and easily slips over her left hand. 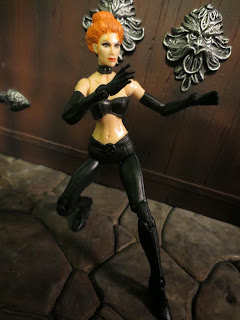 *Black Queen is kind of ... gangly? While she's not quite as segmented as some of Toy Biz' Marvel Legends figures she definitely has some awkwardness going on. Her legs are very odd looking, particularly her hips, the double jointed knees, and her giant wrist hinges. Taking a look at this figure will definitely make you appreciate the steps Hasbro, Mattel, and other companies making super-articulated action figures have made in better incorporating articulation into the sculpt. 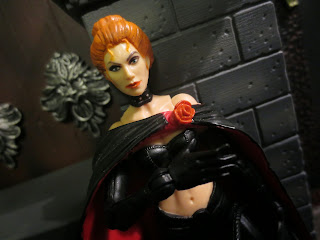 There's nothing amazing about this figure but she's still fairly solid. It's interesting to see how different she is from a figure like Warbird, though, who was released in 2006 (only one year prior to Black Queen). Hasbro really changed a lot when they took over Marvel Legends. The articulation definitely plummeted but overall the figure feels sturdier and looks a little more coherent. Compare this figure with a brand new release like Scarlet Witch or Captain Marvel, though, and you can really see the progress Hasbro has made. Of course, we could also be discussing how older Marvel Legends figures from the first few Toy Biz series came with elaborate bases and sometimes even mini vehicles. If anyone wants to do a study of how the toy business changed from the late 1980s until the modern era, Toy Biz and Hasbro's work with Marvel figures provides an excellent source of study. Marvel Legends, in and of itself, definitely shows the ups and downs we've seen in the action figure aisles in the last 15 years or so. As a figure, I'd give Black Queen a Good and a 1/2. The articulation is definitely wonky, particularly those hips and those horrendous wrists, but the figure looks decent enough overall.

I've reviewed quite a few Marvel Legends figures lately, including: