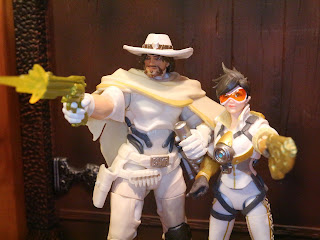 Series 2 of Hasbro Overwatch Ultimates is just starting to trickle out and I was quite surprised last week when the 2-pack of Tracer in her Posh outfit and McCree in his White Hat outfit shipped. Hasbro has a few different SKUs for Overwatch Ultimates and they've definitely been putting out some cool 2-packs so far, pairing together two characters from the game. This is an interesting 2-pack that some folks will love because of the slick color scheme and other will skip because both of these figures are available individually in their standard looks. Since the Overwatch Ultimates line uses new sculpts for each character, Hasbro is definitely going to be using repaints to help balance costs. So far I've been a fan of all the repaints shown and this one is very, very cool. Let's check out Tracer and McCree in their white outfits after the break... 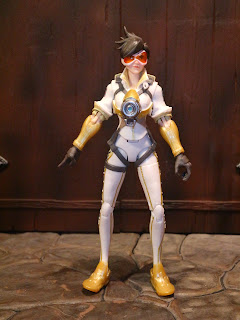 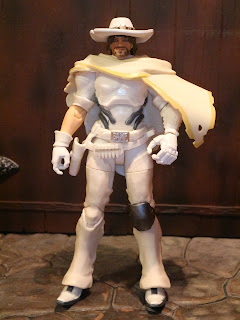 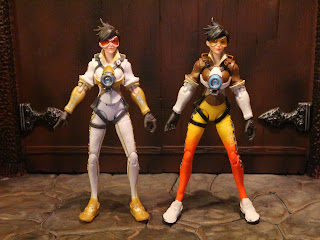 * On the left is the Posh Tracer while the standard Tracer is on the right. They definitely are the same figure just with a new paintjob. I'm mostly going to be pointing out the differences here and the accessories, so check out the standard review for the full scoop. 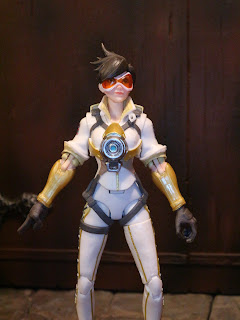 * I really like the white outfit with the gold and grey highlights here. The Posh outfit is one of Tracer's Epic level skins and it's nicely recreated here. The sculpt is still sharp and most of the details from the regular figure, such as the patches on the shoulders, are present and accounted for. 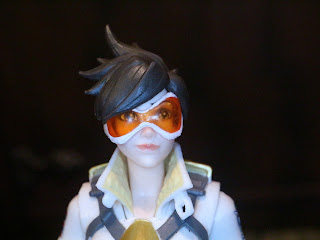 * Tracer's headsculpt is excellent. She's adorable and has fantastic hair! Her goggles are actually a separate piece. They're not removable but you can adjust them a bit to adjust things if needed. It's the same sculpt as the standard figure but the hair is a bit lighter brown and the lenses of the goggles are orange rather than yellow. 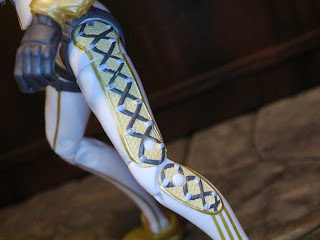 * While Tracer's Posh pants don't have the orange-yellow fade and her name on them, they do have a rather complex painted pattern down the side. The paint applications on Tracer are tight! 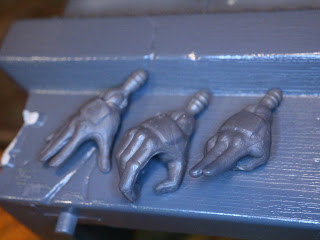 * Tracer has three alternate right hands that can be swapped out for different poses. She has two fingers extended to allow for a stylized salute, her fingers splayed open for striking a pose, and a right handed pistol grip for holding one of her two Pulse Pistols. They swap easily and I had no concerns about any breakage.The color is just a little lighter than on the standard figure, FYI. 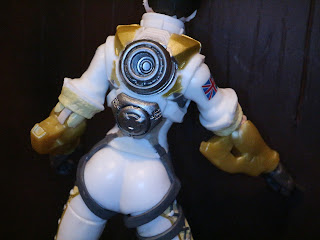 * Tracer's wearing a really cool backpack (which I assume allows her to warp through time and space) and she has a spot to store the pulse bomb she comes with. She also has some really cool patches on her shoulders. 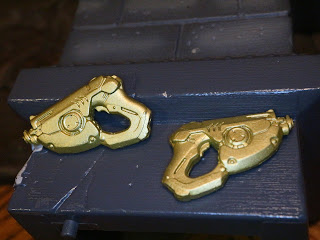 * To aid her in dealing damage Tracer comes wielding dual Pulse Pistols. They're the same pistols that the standard Tracer came with but now they're cast in gold. Why gold? I don't know. Maybe it's a prestige weapon or something. Lots of online shooters have gold weapons, so I'm assuming that's where these come from. 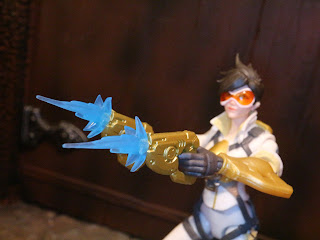 * Not only do Tracer's pistols look cool but they also feature removable energy bursts. The translucent blue bursts fit easily onto the ends of the pistols and definitely add to the dynamic look of the figure. I really like the translucent energy effects that Hasbro has been giving each of these figures in the series and I'm glad they're continuing in the newest releases. 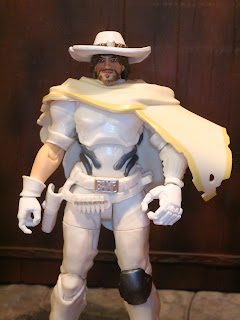 * Now it's time to talk about McCree who is the new figure in the pack (so long as you got this pack before the single release). McCree is a rough riding bandit, vigilante, bounty hunter, and former member of Overwatch. Many of the Overwatch characters are very much archetypal characters and Jesse McCree definitely has elements of nearly any other outlaw type you've ever seen: A poncho, a six shooter, a cowboy hat, and a cybernetic arm. Ok, maybe the cybernetic arm is a bit unique. He's clad in white with some metallic highlights to bring out a few of the more notable details. 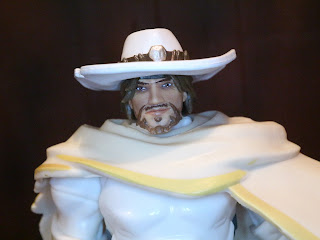 * McCree's headsculpt is excellent and the paintwork definitely captures his rough and rugged charm. I love his hat, too; the damage along the edges adds a lot of character to the design. You can tell that this guy has seen his share of close calls. 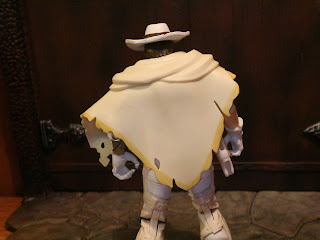 * McCree's rocking a poncho ala Clint Eastwood. It's made from a fairly pliable material, so the articulation isn't hindered too much. The poncho here is much simpler than on the standard figure, as here it is a simple cream color with a tan edge. 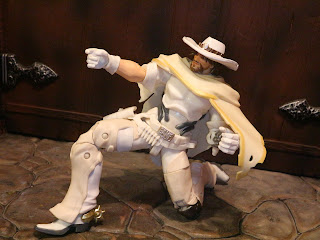 * McCree's articulation is excellent! He has a wide range of joints and he's as sturdy as most of the other figures in the line. With double hinged knees, a balljointed mid-torso, and pectoral hinges, McCree can take some pretty slick gunslinging poses! 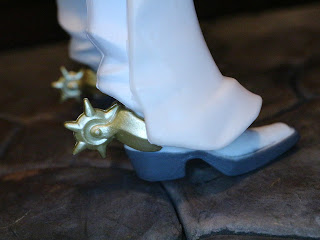 * I love the spurs on his boots. They look nice and sharp! 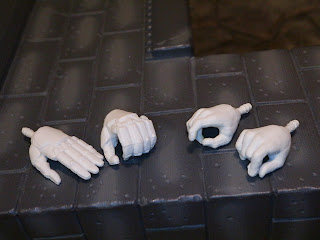 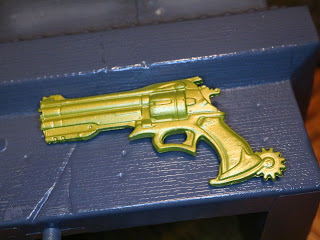 * McCree's six shooter, called the Peacekeeper, is an amazing looking pistol. It's gold, like Tracer's pulse pistols, and the sculpt is amazing. Seriously, this think is so darn sexy! Look at that detail! I love the spur on the grip, too. Imagine McCree pistol whipping a fool with this piece! 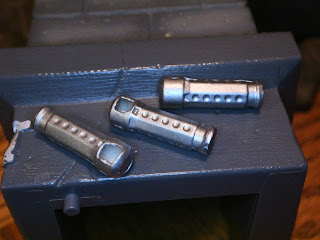 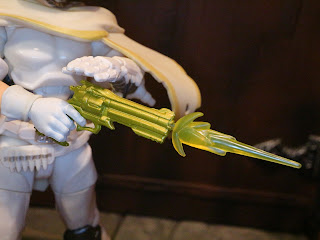 * To improve the Peacekeeper, McCree has a firing effect that plugs into the barrel. Pair this with the fanning hand and McCree looks incredible on display! 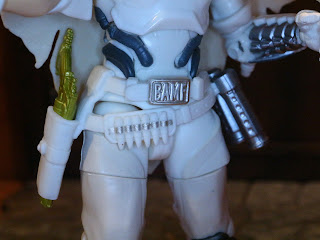 * When he's not actively fighting, McCree can stow his Peacekeeper in the holster on his belt and the three flashbang grenades on the left side of his belt. They plug right on and stay on securely. He's got six more rounds and a belt buckle that proudly proclaims "BAMF." I guess McCree's a big fan of Nightcrawler, huh? Seriously, though, I'm kind of surprised that Hasbro allowed this on here. They did take away McCree's cigar, but at least he's got this. 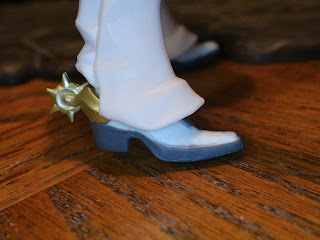 * McCree's heels seem a little too low, meaning that you have to pose him leaning forward, otherwise he tends to tip backwards. 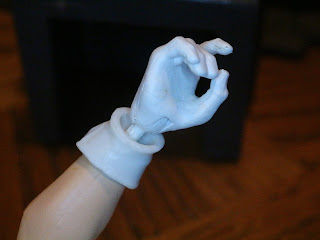 * McCree's hands can be a bit tough to swap out. Make sure t be rather careful or use some heat to soften up the arm. 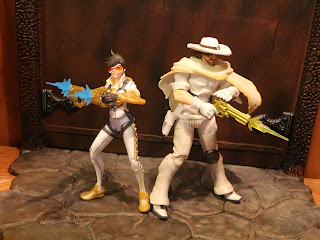 I'm sure that if the line keeps going we'll see some of the more unique variants, too, but for now these two repaints are still pretty exciting. Despite this set offering nothing technically "unique" considering that McCree is currently available on his own, too, you still can't argue with what you're getting here. Lots of accessories, good paintwork and unique sculpting, and sturdy, fun articulation makes this an excellent 2-pack. If you want to skip it, you can without missing a new character, but for fans of this line who are eager for any new release, this is a pretty Epic set.


If you're a fan of Lena Oxton/ Tracer, then check out my review of the Overwatch Ultimates Tracer figure.