Minifigure Review: Heroes Vs. Villains Gift Pack #1 from Masters of the Universe by Mattel 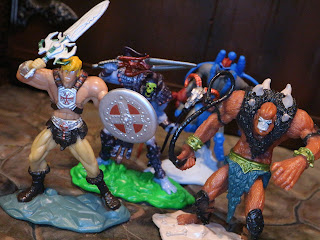 I'm always down for checking out Masters of the Universe stuff and today I'm checking out something from the 200x line that is a bit off the beaten path: The Heroes Vs. Villains Gift Pack #1 from Mattel. While I imagine that most folks are familiar with the 2002 toyline designed by the Four Horsemen did you know that Mattel actually made a number of mini-figure versions of these characters? I don't remember them all that well as they were never the main focus of the line but they're interesting nonetheless. At between 2 and 3 inches they also kind of remind me of Mattel's Mega Force figures, which I loved as a kid. I was at a retro toy and game store a few weeks back and I found this set new in the box for $12 bucks. Sounded like a deal! Let's check out the set after the break... 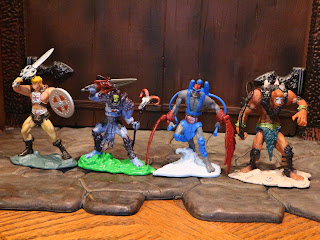 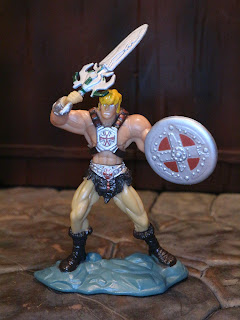 
* First up is He-Man, the most powerful man in the universe. I gotta be honest; I've always loved the 200x He-Man design. It may not be my favorite overall but, darn, is it close. Overall this is a great minifigure of 200x He-Man with a swivel waist. You won't really get different "poses" out of this guy but the swivel waist makes the figure just a bit more fun to mess around with. 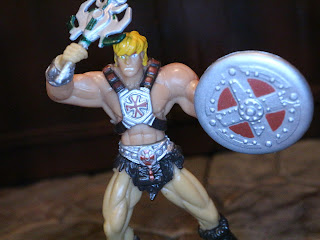 * One of the things I don't like about the figure, though, are the way He-Man's sword and shield are positioned. The shield kind of bends at an awkward angle while the Power Sword covers He-Man's face a bit too much. 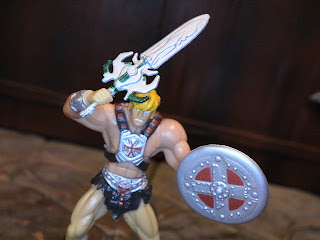 * The weapons look darn nice, though, and have very sharp details and rather nice paint applications for being so small. I love the 200x He-Man weapons. I especially love the battle ax, although that's not included here. I still love it though. It's so....fierce. 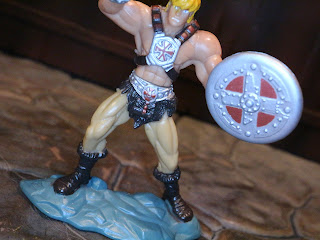 * He-Man's legs are differently colored than the rest of his body. That's kind of odd, isn't it? 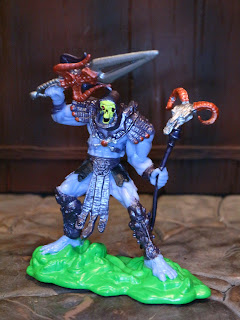 * While I really like the 200x He-Man, I absolutely love the 200x Skeletor. The design is exceptional. This guy looks so cool on a base of green slime wielding his dual swords and his Havoc Staff. The paintwork here is fantastic, too. Like the rest of the figures, Skeletor also features a swivel waist. 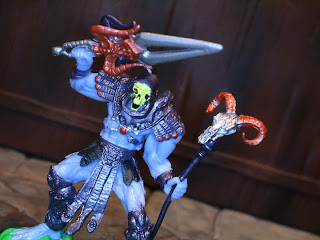 * Here's a close-up of that sword and the head of the Havoc Staff. Those are just awesome. The Four Horsemen did a phenomenal job on the weapon designs for this line and Skeletor's are among the best. 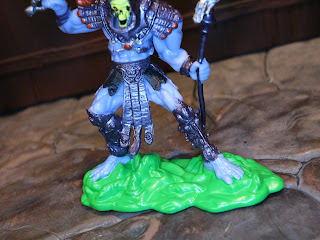 * I love the base and Skeletor's stance. He just looks posed as if ready for battle! Plus, he also looks like he's standing in some nasty pool at Snake Mountain, or perhaps even in some green slime from the Slime Pit. 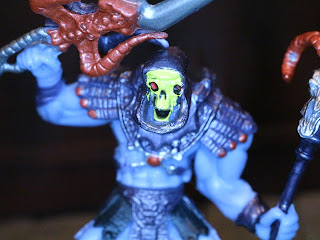 * The face is definitely the weak point in this set. This looks like Skeletor if he were drawn by Mr. Bean. Yikes! 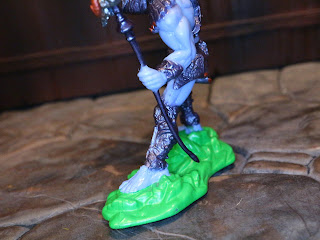 * The bottom of the Havoc Staff is really bent and wiggly, too. I know these things happen when molding stuff like this but I'm still going to complain. Someone has to whine about deficiencies in nearly 20 year old toys. 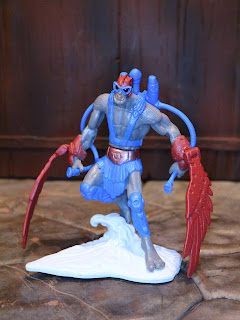 * Hey! This guy is a darn fine looking minifigure! I like Stratos but I always feel like he is the most boring of the Heroic Warriors. The 200x redesign went a long ways towards making him incredibly cool, though, and this figure actually makes him appear as if he is levitating above the clouds. He's fantastic! 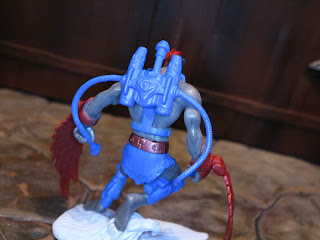 * His jetpack is not only nicely sculpted but the handheld controls are on flexible tubes that fit in Stratos' hands. He looks awesome and just feels more "deluxe" than anyone else in the set. 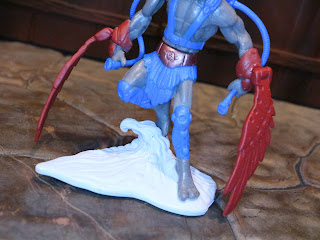 * Here's another shot of the very cool base. I love the whooshing, cloud-like base and the way Stratos is posed atop it. 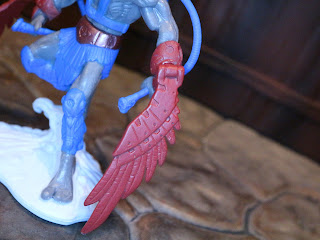 * The wings are darn cool, too. I really though the wings would be hinged. They're not but the sculpt is so convincing that they look like they should be. The sculpt is crisp and wonderful! 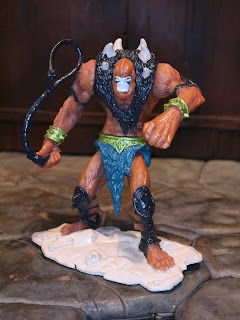 * Last up is Beast Man, who is actually an exclusive to the set. Yes, while you could buy He-Man, Skeletor, and Stratos separately, you had to spring for the whole set yo get Beast Man. He's pretty cool as he is noticeably larger than the other figures, much as how the Mike Young Productions cartoon depicted him. Beast Man just seems burly and beast-like! 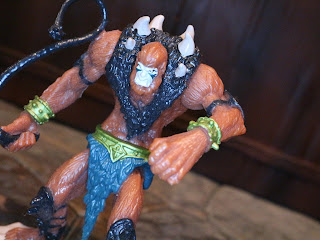 * Beast Man has excellent sculpting as his fur, loincloth, furry necklace-thing, and even armored bands all look exceptional. 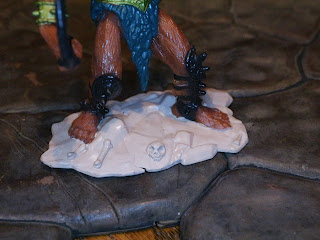 * Beast Man has really cool shin armor. Plus, he's standing on a pile of bones and skulls. That's absolutely some attitude you're showing off their, Raqquill Rqazz. 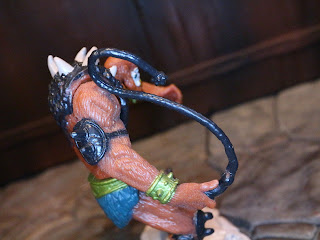 * I like how Mattel made the whip harder so it stayed in a pose but it looks weird resting on Beast Man's shoulder like that. What gives, man? Is he flagellating himself like the monk from The Da Vinci Code? 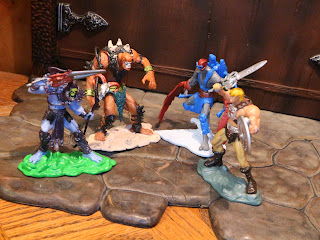 This definitely isn't a set that everyone needs to hunt down but it is a fun curiosity nonetheless. Stratos is the clear winner here, so you could probably just grab him by himself (although Beast Man is pretty nice, too). Skeletor and He-Man are just OK. Still, if you find this cheap, it's a Good set for fans of the 200x style of figure who want something differently sized and easy to display. There's a second set also, which includes different He-Man and Skeletor figures as well as Orko and an exclusive Ram Man. I'm not going to actively track it down but it'd be fun to have.


He-Man/ Prince Adam is one of my favorite characters and I've reviewed quite a few toys of him: The Series 3, Series 2 and Series 1 M.U.S.C.L.E. He-Man and Prince Adam minifigures, plus the Masters of the Universe Classics Galactic Protector He-Man, the future King He-Man, Laser Power He-Man, Snake Armor He-Man, and Flying Fists He-Man, the Super7 Prince Adam (Laughing) exclusive and Ultimates Filmation He-Man, the Mega Construx He-Man from the Battle for Eternia Collection and the He-Man from the Wind Raider Attack set. , and the Funko VYNL Prince Adam + Cringer set.

If you're a Stratos fan then check out my review of the M.U.S.C.L.E. green Stratos from series #2.