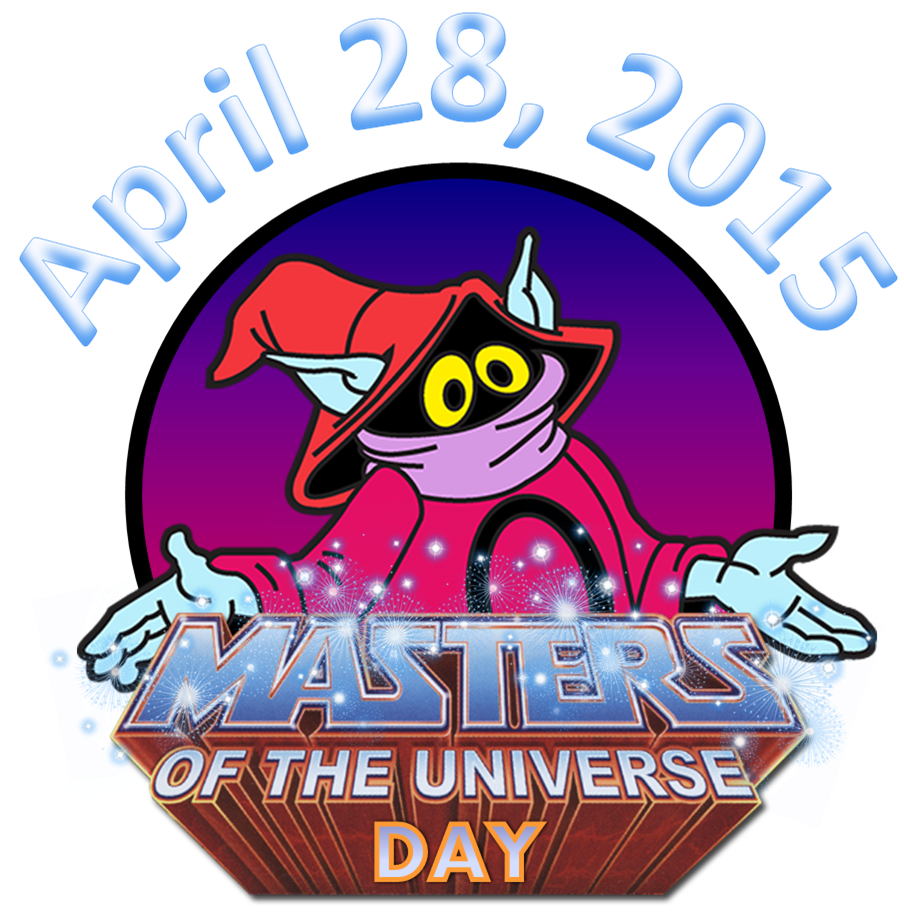 Happy Masters of the Universe Day 2015!

Some people have memories that are triggered by smells. A certain smell can bring to mind thoughts of people, places, and events from their past. For others it's music, as a certain song can carry them back.  For me, action figures always conjure up memories. Whether they're memories of loved ones, friends, special events, or certain places, when thinking about the toys from my childhood (and even now) the memories just keep flowing.  To celebrate Masters of the Universe Day 2015, I'm sharing a few of my most vivid MOTU influenced memories. Some I've shared in years past while others are quite new. They're all special, though, and I'm sharing them after the break...

I still like to cosplay, but I do it far less often than when I was a kid (and at more appropriate times. Usually).  Since He-Man was one of my favorite characters, I always wanted to dress up like him, but the only problem with dressing up like He-Man is that he's a half naked barbarian (that phrase should help the Google hits- *Editor*).  My He-Man costume consisted simply of some red shorts, two random belts across my chest, whatever toy sword I had laying around, and a pot lid for a shield. In fact, it was this pot lid shown below.

I remember going out to play He-Man one day and my mother tried to tell me that I should wear a t-shirt. I tried to explain that He-Man didn't wear a shirt, but she told me a white t-shirt would look like I had muscles. I'm not sure why it would nor do I remember if I wore it or not. She should have encouraged me to dress like Battle Armor He-Man; then I could have wrapped myself in tin foil.


May Grandmother passed away in March of 2014. Just yesterday I was driving home from work and just out of the blue the thought passed through my mind that I wanted to call her and my grandfather (Grandpa passed away just a few weeks after Grandma last year); I still miss them both. Many of my action figure related memories stem from my Granny but one of the most significant ones that sticks out for me was when I was staying at Granny's house and she came out of her bedroom dressed like Skeletor.  The 1987 movie had just came out, but I was too scared to go see it, only being around 3 or 4 at the time.  Anyways, I did want to play He-Man and so I went and grabbed 2 belts, some red shorts, and a pot lid, and came out looking for evil.  And find evil I did! When Granny came out of her room dressed in a hooded robe with her face covered in cold cream and wielding a broom as her Havok Staff, I actually was kind of scared at first.  When your Grandma dresses up like Skeletor to play Masters of the Universe with you, you know she loves you!


I've read the comments of many Masters fans who seem to have great memories of receiving cool MOTU stuff in their Easter baskets.  I have a similar memory of Easter 1987 and the pictures to prove it: Check them out!  There's another picture where I'm holding a Screech in my hand, but Fisto and Stridor was really where it was at.  If you look carefully, you'll also see some of the hardback MOTU books. This was quite the hall from Plundor himself!


Stinkor and a Night Out with my Mom

Here's another memory from 1987: I very vividly remember a special night when my mother took me out to dinner at McDonald's, took me to see the re-release of Snow White & The Seven Dwarfs, and buying me Stinkor, the skunk like MOTU action figure that had patchouli oil mixed into the plastic.  My mother always had a knack for taking me out to do things and making them really special, and Stinkor always reminds me of that.

Christmas Morning and the Slime Pit


Picture this: Christmas morning, 1988. A Young Barbecue17 wakes up to find that Santa Claus has delivered plenty of goodies under the tree.  One of those sets of goodies just happens to be the Slime Pit, that deranged MOTU play set that was devoted solely to pouring green sludge onto the heads of your victims.  As soon as I opened the Slime Pit, I spilled the slime.  Fortunately, I was near the back of the Christmas tree so I was able cover the slime stain with the tree skirt.  Unfortunately, I managed to get some slime on the new fluffy white dog slippers I was wearing.  Maybe it was because I got the Slime Pit in 1988 two years after it had been released, but I remember the Slime being very runny and watery, unlike Ghostbusters Slime which was more solid. I think when the stain was discovered, it got blamed on the Christmas tree.

Memories being built with little Adora!

I now have a little Masters of the Universe fan. Her name's Adora and she's my little 20 month old daughter!
We already had her first name picked out (named after a very special friend who died far too young) but we didn't yet have a middle name.  I suggested Adora and amazingly, my wife really liked it. Not only does it fit beautifully with her first and last name, but it also evokes a strong female character who embodies strength, wisdom, courage, friendship, compassion, and who makes a positive change in the world. Those are all traits that I hope to inspire in my daughter. Thank goodness that she already seems to really like She-Ra. She's definitely a fan since before we turn the TV on she'll often start excitedly yelling "She! She! She!" Yup, she loves some She-Ra. She seems to really like She-Ra and Swiftwind, Skeletor's voice, and Loo-Kee. Yeah. She really does seem to like Loo-Kee. 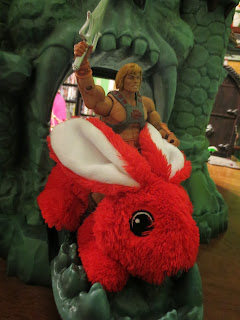 Getting the new MOTUC Castle Grayskull is still a great MOTUC memory! I actually wrote this the night that Castle Grayskull arrived at my house and when I assembled it with a then 3 month old baby Adora: "Still, as I opened the box this afternoon I couldn't help but hide my excitement. Me and my daughter (she's only three months old) laid on the rug in her room and played with the castle. She didn't play too much (she only just rolled over for the first time this past week) but she did seem to be engaged by me and by Leopold, her bright red Duplo bunny. As I has Leopold enter through the door of Castle Grayskull, attempt to sit on the throne, and carry He-Man into battle, my daughter just watched and babbled away. She seemed amused (she loves to smile and laugh), as was I. I really think there's something special about the toys we play with, especially those that we grew up with or that are reminiscent of those we grew up with. There's something magical about them that reconnects us to to our younger selves. I know that when I talk about or (dis)play my collections, I often think about my family, friends, and other relatives, memories of whom are jogged by these pieces of ultimately insignificant plastic. I also get reconnected to a time when life seemed simpler and yet still held the promise of mystery and magic. Stories, dreams, hopes, fears, fantasies, frustrations; all of these things were explored by us with our toys. They helped to cultivate our imaginations and also prepare us for life. As my daughter watched on as I had a muscled barbarian ride a red bunny rabbit through the doors of a giant green castle while his empowered warrior sister battled a skeletal menace while standing atop the ancient fortress, I silently prayed that in her little mind, she would begin to believe that anything is possible too.

I hope that these memories not only bring a smile to your face, but awaken some great childhood memories of your own (whether they be MOTU related or not). Happy Masters of the Universe Day to you! Be sure to check out the festivities on these other fine sites who are also participating today:

The super cool Masters of the Universe Day logos were created by The Toy Box using artwork of Orko created by artist KWilkinson.