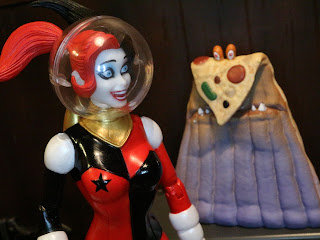 Earlier this week I reviewed the Traditional Harley Quinn figure and now I'm looking at the second figure in the Amanda Conner inspired DC Designer Series: Spacesuit Harley Quinn. Coming from the cover of issue #12 of the comic (she wears an outfit similar to this in the story, but it's a bit different) this figure represents an outfit Harley wore in space during her team-up with Power Girl against the evil Manos. Heck, it also includes the guardian of Manos' realm, a giant talking slice of pizza. This line definitely manages to capture the offbeat humor and fun of the Harley Quinn comic, but does it capture the quality? Join on and learn more after the break... 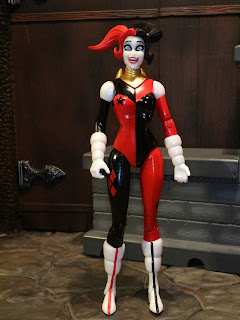 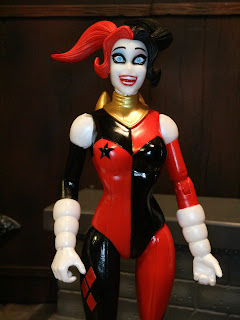 
* The design on this figure is stellar. Out of this world, really. Intergalactic, planetary; planetary, intergalactic. OK, that's enough. In all honesty, though, DC Collectibles really produces some nice looking figures. Harley is gorgeous and, while she does retain the less busy look of Conner's art, she certainly has some nice sculpted detail such as the lines in her suit, the puffy gloves, and the diamonds on her thigh. The paintwork is clean and neat with a glossy finish that fits the retro space vibe Harley has going on. I'm really liking this one. 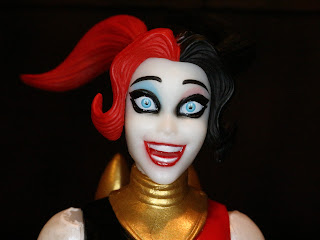 * The headsculpt is excellent, especially the expressive face. Amanda Conner does an excellent job at giving her characters some truly expressive faces and body language, so this absolutely gleeful look on Harley's face is very fitting. Beautiful work here, and even the paint looks fantastic. Very clean and neatly applied. 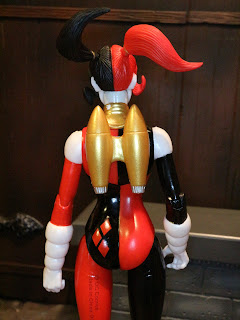 * From the back Harley also looks great. I love her little jet pack. Again, it's very retro and has that space vibe I just love. 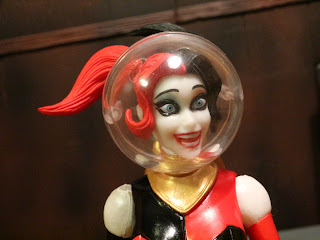 * To complete her ensemble, Dr. Quinzel comes with a translucent space helmet that fits over her head. It's made from two separate pieces and it plugs together in the middle. It looks pretty good on the figure. Her pigtails are removable (more on those in a moment) and can be popped out and put back into place when the dome is in position. 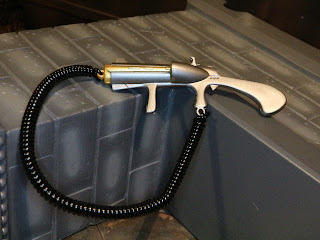 * Harley includes a big ol' space rifle that features a futuristic looking cork. Yup, it's Harley's version of a space rifle alright. The wire connecting the cork to the rifle is actually made from a stretchy plastic, kind of like an old time phone cord. Remember when phones had cords? Kids, if you don't know what I'm talking about, go visit an office or something. Or use the Google. 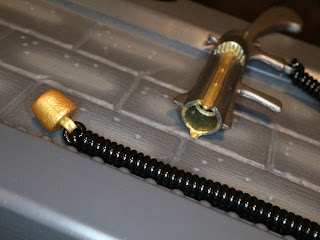 * Check it out! The space cork actually pops out of he barrel! This isn't an earth shattering feature or anything but it sure is fun. 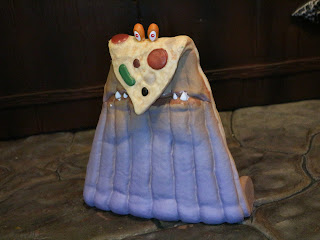 * Harley includes a companion minifigure: The guardian of the realm of Manos! Yes, it's a little slice of pizza-like alien. He's just a little shy of 3-inches tall (he's enormous in the comic) but he features some really nice sculpting and paintwork. Like Bernie with the Traditional Harley Quinn, the inclusion of a little sidekick figure is really neat. It kind of reminds me of how so many TMNT and G.I. Joe figures came with animal companions of some sort. 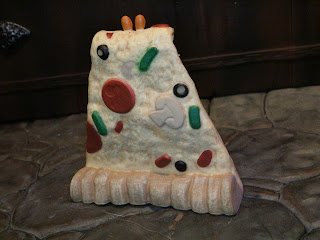 * But wait! There's more! Not only is this guy sculpted and painted to look like pizza, but he's actually pizza scented, too! Remember the various pizza scented stickers you could buy in the 1980s and early 1990s? That's kind of what he smells like. It Kraft made a macaroni and cheese power that was pizza flavored, this is probably what it would smell like. 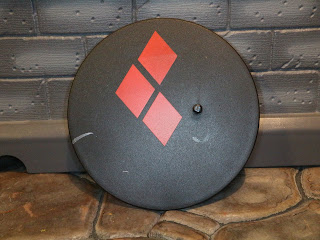 * Last, and certainly not least, is a display stand! It has been quite a few years since DC Collectibles included display bases with any of their action figures, so it's nice to see a set doing it again. I love the inclusion of the display stand. It's simple but painted with some Harley diamonds, so it suits the figure well. 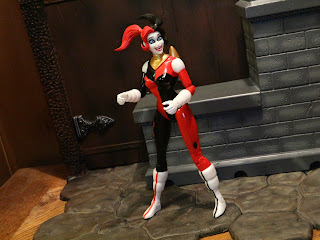 * The same as the traditional Harley, this figure's articulation is a bit odd. There are definitely more joints here than on many DC figures, but they're not all that useful. The double hinged knees are great, but the limited ankles and the restricted hip joints make them pretty useless. Furthermore, the neck joint really seems like it's either a swivel joint or just a very poor balljoint.I would have preferred less articulation with a better preposed look or more articulation, but not this bizarre hybrid. 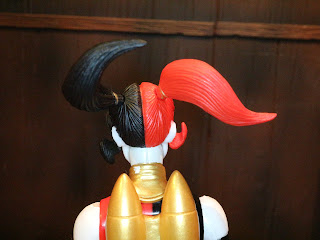 * These. Pigtails. Drive. Me. Crazy!!! And not in a "I love Harley's hair" kind of way. More in a Why. The. Heck. Will. They. Not. Stay. Put. sort of way. They're supposed to be removable so you can pop them out and in again to put Harley's dome on, but you know what? These things have a mind of their own. I've seen them pop out while moving the figure, bumping the figure, and even during an episode of Seinfeld everytime Kramer popped through the door of Jerry's apartment. Yes, they fell out every time he opened that door! OK, I'm making that up, but not the rest. They're really finicky. 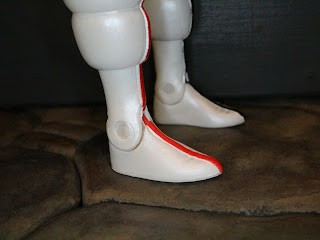 * It's tough to tell from a picture, but Harley's right ankle was not functioning properly out of the package. The ankle peg did not fit all the way through the hold on the right side, and thus Harley sometimes sways and tips forward or backward. A little trimming fixed things (I think) but it still seemed like a bit of oversight. 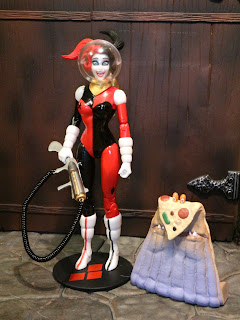 You know, while this figure definitely has some problems with it, I can't help but dig just how cool it looks. If you're planning to mostly have this figure on display along with the rest of the set and other DC Designer Series figures, you should be in good shape. Just find a secure pose, use the stand, and you should be good. As a toy, Harley's less impressive and may not be as fun for you. Overall, Harley's a Good and a 1/2 figure, so long as you're mostly focused on her display value. She has an incredible shelf presence and should be a lot of fun to show off in your collection. Those little problems like the pigtails and the wonky articulation do bother me, but it's tough to completely reject an action figure that looks this good.